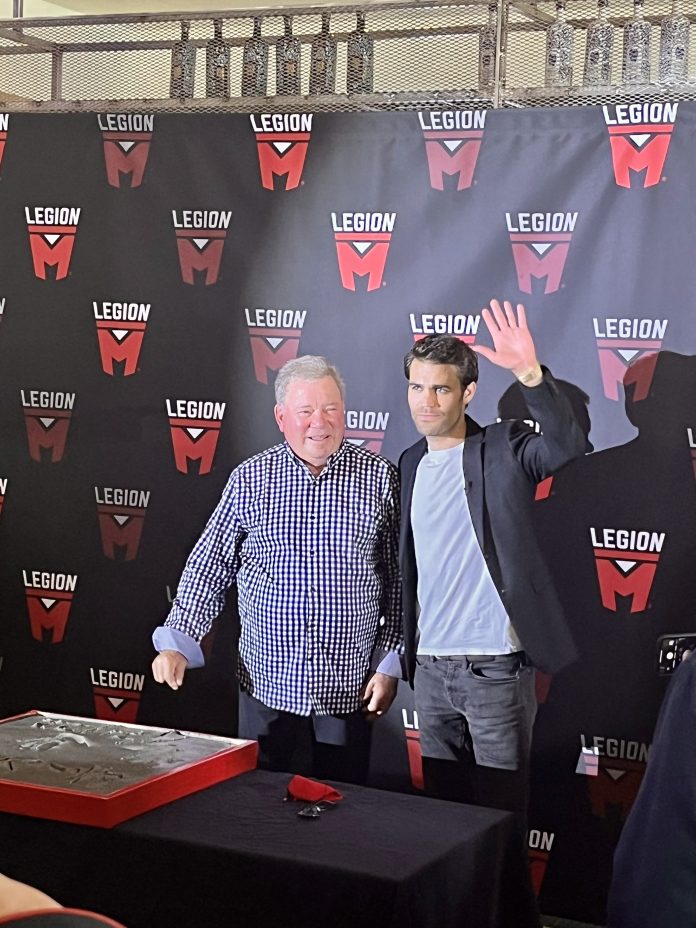 Captain Kirk and Captain Kirk meeting is our kind of crossover event… and even better when it’s happening in real life instead of the multiverse. The legendary actor William Shatner was honored by Legion M in a special handprint ceremony at San Diego Comic-Con, with guest speakers including Paul Wesley, who is currently portraying the iconic Captain on Paramount+’s Star Trek: Strange New Worlds. HNS was on-hand to witness this generational gathering and celebration of boldly going where no man has gone before.

William Shatner’s handprints and signature were immortalized in concrete at Theatre Box in San Diego on the first morning of SDCC in a ceremony hosted by Stephen Kramer Glickman (actor, comedian, and host of The Night Time Show podcast). Celebrated film critic Leonard Maltin also spoke at the event, sharing stories from his decades long friendship with Shatner and possibly lesser known aspects of his career – such as some fascinating tales from his radio days.

We may be a little biased as fans from The Vampire Diaries days, but Paul Wesley gave a truly moving speech, speaking about how he can’t hope to replace or live up to Shatner’s legend but only try to do something new with his interpretation of Captain Kirk. We also learned that Shatner and Wesley are former neighbors, and Shatner shared some funny asides about Paul complaining about the air traffic noise overhead their area.

The love for Shatner was clear in the room – from the MC and speakers to the Legion M investors and many fans in attendance, including a large group in cosplay as various Star Trek characters who posed for photos with Shatner and Wesley following the ceremony.

To learn more about William Shatner and his storied career, be sure to follow along with The Untitled William Shatner Documentary, which is currently in development by Legion M. Fans can invest in the project to own a stake and share in any revenue the movie earns.

Check out more photos from the handprint ceremony below:

About The Untitled William Shatner Documentary:

From make-believe starship captain to a real-life rocketman, William Shatner has led one of the most unique and best-lived lives on the planet. And while the actor William Shatner may be recognizable around the globe, the man behind the masks is even more interesting than the iconic roles he’s played.

Join Legion M and the acclaimed documentary team at Exhibit A Pictures (Leap of Faith: William Friedkin on The Exorcist, Memory: The Origins of Alien, 78/52: Hitchcock’s Shower Scene) in producing this fascinating look at one of the most illustrious actors of our time.