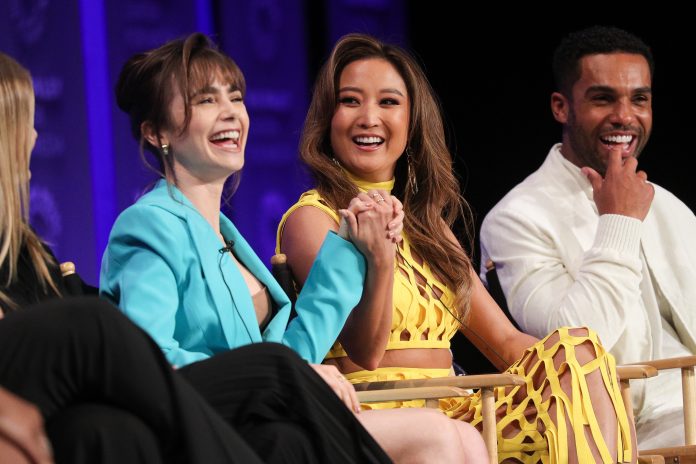 France’s finest reunited at the Dolby Theater in Hollywood for Emily in Paris‘s first PaleyFest outing. A panel including Creator, Showrunner, Writer, and Executive Producer Darren Starr; Executive Producer and Director Andrew Fleming; and stars Lily Collins (Emily Cooper); Ashley Park (Mindy Chen); Lucas Bravo (Gabriel); Lucien Laviscount (Alfie); and Camille Razat (Camille) took the stage to spill some secrets about the making of Season 2 – and tease what’s to come in the wake of the show’s renewal for Seasons 3 and 4.

Before we dive into the exciting details behind Emily in Paris‘s latest season, let’s start with the big reveals about what’s coming up next. While Darren Starr and the panel couldn’t tease too much about what to expect when Emily and friends (and frenemies?!) next grace our Netflix accounts, we did learn a few exciting details. Season 3 will begin shooting in June, and Lucien Laviscount – who stole our hearts (and Emily’s) this season as snarky, football-obsessed Englishman Alfie – will be returning as a series regular. Emily in London, anyone? The panel was tightlipped about plot details, but Starr did tease that “Emily always wants to do the right thing.” After the finale’s big Camille and Gabriel bombshell, what the right thing looks like is anyone’s guess – but with those two living downstairs and Alfie still in the picture, there’s sure to be plenty of drama when we return to Paris.

Speaking of Alfie, Laviscount was melting hearts from the PaleyFest stage as well as he shared his excitement – and nerves – for joining both the panel and the show. Lucien said that he felt like the new kid at school joining the cast, but that they made him feel “so welcomed.” “Lily [Collins] is one of the most incredible women to work with,” he said. “She makes you feel super comfortable, and you can play.” Lily also spoke highly of Lucien joining the cast, saying that it was “so apparent” that he was Alfie from his audition tape.

Alfie’s appearance wasn’t the only shakeup in Season 2. The panel spoke about several changes to the show from the first season, including “allowing Emily to settle in more and making France come alive in new ways,” according to Lily Collins. Those new ways included more French language, new locations including St. Tropez (site of perhaps THE most iconic girls’ trip with Emily, Mindy, and Camille), and the female friendships “blossoming in different ways.”

While (spoiler) not all of those female friendships stay intact for the whole season, Lily, Ashley Park, and Camille Razat all spoke so highly of the relationships between their characters – which seem to also carry over off-screen. Ashley said she “was attracted to the genuine warmth and connection between Mindy and Emily” and that “they mirror [her] friendship with Lily as two women who are trying to figure out who they are and never doubt their support for one another.”

We love to see strong friendships between stronger ladies, so it was painful when one of the biggest heartbreaks of the season came not from a romantic breakup, but from Camille and Emily’s friendship falling apart after Camille learns of Emily sleeping with Gabriel. While they make some strides towards reconnecting, Camille’s intentions seem to be more geared towards winning back Gabriel than genuinely repairing things with Emily. How the love triangle and friendship will pan out is one of the things we’re most anxiously looking forward to seeing in Season 3 – and the cast had some thoughts. “Like every relationship, you try to make things work,” Camille shared cryptically. Darren Starr added that Camille “really loves Gabriel and feels like they’re meant to be together… and Gabriel has a long history with Camille.” Will that long history be enough to keep them together? We shall see.

Of course the cast also had to share some love for Paris itself, which brings so much to the show. Though, as Darren Starr put it, “it’s not hard to make Paris look amazing.” With two of the French cast members in attendance – Lucas and Camille – the subject of how accurate the portrayal of Paris is in Emily in Paris was also a hot topic. They said that from their perspective, most of it is true – and the show is a love letter to Paris. While it emphasizes on charming cliches for comedy, there’s truth in everything. Lucas and Camille shared that it feels good to have an American point of view and a fresh perspective on the city, and that Darren is a master of making the city a character of its own.

I don’t know about you, but after all of that Paris talk I’m ready for a baguette, some chocolat chaud, and a rewatch of Emily in Paris. Catch the first two seasons now on Netflix and stay tuned for Season 3, filming this summer.