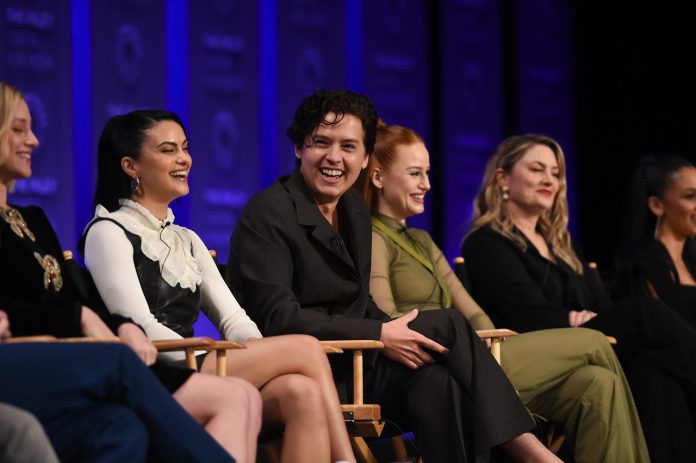 Riverdale‘s finest were out in full force to represent the Town with Pep – and talk Season 6 – in Hollywood for PaleyFest LA on Saturday. The cast and creators who came together in the iconic Dolby Theater included K.J. Apa (Archie Andrews), Cole Sprouse (Jughead Jones), Lili Reinhart (Betty Cooper), Camila Mendes (Veronica Lodge), Madelaine Petsch (Cheryl Blossom), Mädchen Amick (Alice Cooper), Vanessa Morgan (Toni Topaz), Erinn Westbrook (Tabitha Tate), Showrunner and Executive Producer Roberto Aguirre-Sacasa, and Executive Producer Sarah Schechter. After an early screening of Episode 6×09, we were in for an exciting panel during which the cast and creators talked supernatural powers, the musical episode, and the potential for the return of a certain teenage witch.

One of the first topics the panel touched on was the supernatural abilities now possessed by Archie, Betty, and Jughead, which were on full display in the episode – with Archie defying death at least twice, Jughead using his mind-reading in search of leads on a missing Baby Anthony, and Betty preventing death by poison scone with her aura-reading skills. Showrunner and Executive Producer Roberto Aguirre-Sacasa spoke about how he and the writers were inspired to “go full on” after experimenting with the supernatural around the Rivervale arc and the encouraging fan response. He also referenced legends such as Stephen King and M. Night Shyamalan as tonal references for this newer type of storytelling on Riverdale.

Speaking of magical powers, Aguirre-Sacasa also strongly hinted that the town will see the return of teenage witch Sabrina Spellman (Kiernan Shipka). As Cheryl learns more about her own witch powers, things are getting witchier in Riverdale – and as Madelaine Petsch put it, “There’s no better person to learn from” than Sabrina.

We also may not have seen the end of how the explosion and the resulting infusion of supernatural abilities will affect the town. The panel teased that Archie, Betty, and Jughead will not be the only ones to develop powers as the gang barrels towards an epic battle between good and evil.

Probably (definitely?) on the side of evil? Percival Pickens (Chris O’Shea), who is seemingly behind more than his fair share of chaos in Riverdale and is using his suspected mind control / powers of persuasion to bend the town to his will. Aguirre-Sacasa and Sarah Schechter teased that Percival is a “more mysterious supernatural villain” vs. someone like Hiram Lodge, who represents a more familiar mob boss archetype. They also hinted that Percival’s arc is “possibly” connected to the spread of powers in Riverdale.

Outside of the seemingly inevitable supernatural showdown this season, there’s one thing we really hoped to hear about – and that’s the musical episode. While these have become a fan favorite and staple on Riverdale, Aguirre-Sacasa said that there nearly wasn’t going to be one in Season 6. He and the writers always want to ensure that the musical episode fits with the larger story, and at first that fit didn’t seem to be there… until a serial killer fan convention taking place in Riverdale made its way into the roadmap. The cast and crew are currently filming this convention arc, which will set the stage for songs from the Broadway musical American Psycho. Extra fun fact: Aguirre-Sacasa himself wrote the book for the musical, which debuted in London in 2013 and also features music and lyrics by Duncan Sheik.

Lastly, it wouldn’t be a proper Riverdale panel without some serious discussion of our favorite ships – and the cast delivered. Multiple fan questions were directed at Madelaine Petsch and Vanessa Morgan about any possibility of a return of Choni (Cheryl and Toni), and to thank them for their positive LGBTQIA+ representation on the show. Petsch said, “I am the captain of that ship but I can’t make any promises about Choni – that’s on Roberto,” giving a pointed look to the Showrunner. Morgan also expressed her love of the ship and appreciation for the fans, sharing that one of her favorite parts of this season was playing Thomasina Topaz – the star-crossed lover of Cheryl’s ancestor / possessor Abigail Blossom.

The cast also spoke positively about their feelings toward Barchie (Betty and Archie), though the room definitely showed some appreciation for Bughead (Betty and Jughead) when mentioned. Lili Reinhart said that all of the relationships “are beautiful in their own way,” but that Betty and Archie have found a home in each other. It’s that lovely kind of relationship with such a solid base in friendship that becomes something more. Cole Sprouse speculated that Jughead is “an understandably salty young man” about the situation, but that there could be “no more perfect match for Jughead than someone who has a direct and blood connection to Pop’s” (referencing his character’s current relationship with Tabitha Tate). And not to worry – Sprouse and Reinhart both reassured the audience that Betty and Jughead still find each other when it comes to mysteries. We’re betting that there will be plenty more of those to solve before the season is through.

From American Psycho to a supernatural showdown, it seems that there is plenty more to look forward to in Season 6 of Riverdale. Catch new episodes Sunday nights at 8/7C on The CW.