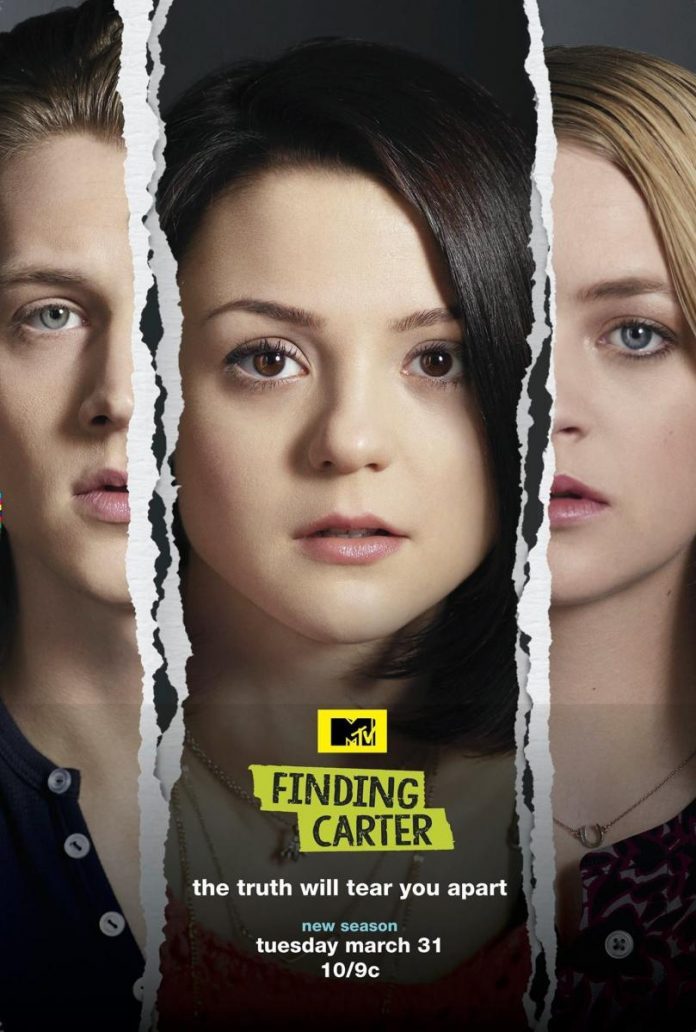 In preparation for the return of season two of FINDING CARTER October 6th, check out this throwback YAH interview with none other than Alex Saxon! [April 28, 2015] Young Adult Hollywood had the amazing opportunity to interview Alex Saxon, who many of you know as Wyatt on ABC Family’s The Fosters, and more so as Max on MTV’s critically acclaimed drama, Finding Carter.

If you haven’t been watching, you’ve been living under a rock and I urge you to get on that STAT! As the show is back for its second season—and if you thought season one was a heck of a ride—you haven’t seen anything yet.

Season two picks up right after last season’s cliffhanger with newly kidnapped Carter (Kathryn Prescott) more scared than ever.  What Carter learns will shake the foundation of her already fragile family to its core, as the biggest secrets of all are yet to be revealed.

Check out what Alex Saxon had to say about what’s coming up on Finding Carter.

YAH: So the end of season one left us all as if we were punched in the gut and according to the shows showrunner, you were actually supposed to have died. What was your reaction when you found out that Max was actually going to make a full recovery?

Alex: I was elated. I actually went back to work for at least seven weeks back in Atlanta and I couldn’t tell anybody or talk about so I feel like I went through all the stages of grief with it. I had wrapped my head around it. I just wanted to do the job as best I could and leave it at that and just feel really great about what episodes I did get to work on. So when I found out there was a possibility I could not end up dying, I was pretty elated. But even cautious at first. Just cause I already sort of came to terms with the fact that I’d be dying once so I wasn’t fully jumping for joy. I was a little cautious for it but really happy none-the-less.

YAH: Now a lot of people are on the fence about your relationship with Crash. How do you feel about that?

Alex: Well I understand why you could be on the fence about it. With whether it’s alright to trust him or forgive him. First reaction would be to stay away from someone who did that to you. Someone who is so unstable and dangerous at times. So I think Max had to make a decision about forgiving him. Which is a great thing because forgiveness is a decision long before it’s a feeling. So he decided he was going to forgive Crash and is working towards that himself. And that is allowing others to get on board on their own good time. They may not feel the same way initially but Max is setting the tone for how he wants it to turn out. And people can either jump on board with that or not.

YAH: Do you consider yourself similar or completely different from Max in real life?

Alex: Certain aspects. We look the same. I don’t know, they’re certain aspects to how he interacts with people that I really identify with and how he thinks about things. As far as season one he was more laid back about certain things and I have more of an ambitious side that if I am not exercising it, not feeling like I’m working towards something that I care about, it makes me feel not fulfilled or content. So we’re different in that way.

YAH: What are some things that viewers may not know about you?

Alex: Good question. I grew up on land in Missouri so I’m used to wide open spaces and no neighbors and all that.

Alex: Yeah, no city. I’m comfortable enough in it but it’s definitely a big change moving to Los Angeles. To go from the farm to being stacked on top of each other in these apartments.

YAH: How are you adjusting to it?

Alex: I think well enough. I got about an upper limit of like twelve weeks then I need to go back to Missouri and just check back in—or sharpen the saw as my mom would say.

YAH: I have to say you’re breaking my heart. This is probably the question I’ve been dying to ask and everyone wants to know. For us shippers, is there still any hope for Maxlor?

Alex: You know what, I wouldn’t give up hope yet. I think Max is understanding of how difficult it could be for Taylor to jump on board with forgiving Crash and all that. He knows he has to do it but they just don’t line up right now. But I don’t think that means Max has given up on the possibility—he’s still holding a candle for their relationship—even if he can’t express it.

YAH: Now we’re expecting a newcomer to arrive from Max and Carter’s past. Is she going to stir up any trouble?

Alex: Well…that’s one word for it. She’s definitely got information about Max and Carter’s past that we haven’t heard about until now and so it’ll be really interesting to see how she plays into all that. How she fits into Carter’s new life with all her friends that she has there in Virginia. So yeah, lots of interesting things to come out of that I think.

YAH: We were lucky enough to get an advanced screening of tonight’s episode and with the show almost at mid-season, and with Lori safely—at least for now—tucked away in prison, I feel like this is the quiet before the storm. What other craziness can we expect in season two?

Alex: There’s a lot. Carter is still having to figure out things about Lori. We’ll continue to see what all is going on with Taylor and how Max can be supportive or help her through everything that is going on. She also got this budding romance with Ofe. Which as an audience member I think it’s really great, I think Ofe is so fantastic.

YAH: I am completely against that, for the record.

Alex: I completely respect that.

YAH: I’m rooting for you, okay?

Alex: Thank you, thank you I appreciate it.

Well I think there are a lot of fun things coming up in season two. And quiet before the storm is a good way of putting it. Quiet before several storms.

YAH: That’s what it feel like and after tonight’s episode, it’s going to be insane. But thank you so much Alex for taking the time to talk to us and we’re really looking forward to the rest of season two!

Alex: I really appreciate talking to you. Thank you and have a good day!