Screaming fans were huddled to the front of the stage at the Fillmore Miami Beach, awaiting on none other than Nick Jonas. On tour with Bebe Rexha, he was half way through his tour, titled—Nick Jonas Live in Concert. With great energy, fan interaction, and the mega hits that have consumed the radios, Nick Jonas slayed on Sunday, September 29th in Miami, opening with Chains and ending the night with Jealous.

My biggest surprise was having the privilege of watching Bebe Rexha who opened for Nick Jonas. I hadn’t heard any of her music until then and I was wonderfully amazed not just by her performance but getting to know her. Bebe’s interaction with the crowd and giving us an insight to her shocked concert goers as we learned that she was no stranger to our ears. You may recognize her as the singer in David Guetta and Nicki Minaj’s, Hey Mama, as well as the songwriter for Eminem and Rhianna’s, Monster.

If you haven’t caught Nick Jonas live as a solo artist, you’re missing out! Check out the rest of his tour dates and get ready for a phenomenal show!

How much are you loving Nick Jonas right now? Tweet us @YAHollywood & @TweetsByKarina and let us know! 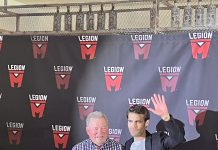