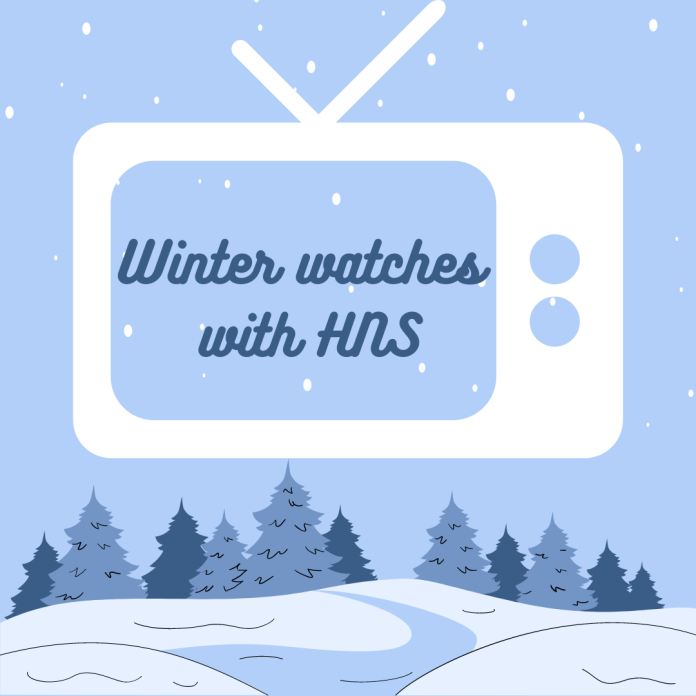 Cozy up with HNS’s winter watches!

If you live anywhere where it may be chilly and on the brink of snowing every day for the next four months, then you’re probably going to cozy up on your couch for the next few months. Add a good TV show and a warm drink, and you’re good to go! Now, you’ll want to watch something that’ll make you feel good because let’s face it, the cold is not fun.

Here are some winter watches that’ll be sure to keep you warm this winter!

I watched this last year, but I am rewatching it because it’s such a feel-good show. What better show to watch during the gloomy days of winter than one that will make you laugh and cry?

“Ted Lasso” specializes in laughs and motivational speeches, but it’s also relevant as hell. The show touches upon loss, anxiety and major life changes. We all go through those aspects of life, and it’s done in such a great way that it really makes you appreciate the show even more for the hard truths of life. The realness of the show is so well done, and even though it’s heavy at times, the comedy that follows will make you smile.

The show is the perfect amount of fun and will make you smile the whole way through!

It’s time for a secret: this is the first Marvel show I’ve watched in its entirety. I’m a fan of the Marvel universe, but I haven’t sat down to complete all of the shows just yet. “She-Hulk” I did watch all the way through, and I am so glad that I did.

It’s funny — plain and simple. I do have to say, I am not a huge fan of The Hulk, but I loved the She-Hulk character. Jen is a bad ass! Not only is she strong, but she’s funny, smart, determined and unapologetic. We stan. Seriously, there were moments where I laughed out loud. Jen is hilarious and just clever. The storylines are fun while still holding close to the overall tone of Marvel. One of the villains may be a familiar face if you were a fan of “The Good Place.”

And we can’t forget that women superheroes are AMAZING.

If you grew up watching the “High School Musical” movies and loved them, chances are you’ll want to add this show to your list, too. There’s nothing about this show that will blow you away and have you praising it as the #1 show of the year. However, it’s cute and will make you feel warm and fuzzy.

It has music, heart and laughs. The show has the right amount of cheesiness that won’t make you cringe during every scene. While there are some aspects of the show that are relatable and not cheery all the time, it’s good fun.

‘Tis the season and all! If you’re like me and love everything Christmas, then add this to the list, especially if you grew up watching the “Santa Clause” movies a million times during the season.

When I found out that they were going to make a TV series surrounding the “Santa Clause” franchise, I was immediately on board. Though the series is ongoing, it gives you that nostalgia from your childhood that you may crave. There’s no other way to describe it than being cute and something to watch to put you in the Christmas spirit.

While the show may not be targeted toward adults, the nostalgia of it will pull in adults. I mean, I’m an adult, and I like it. It’s nostalgic and makes me feel warm inside. So, have no shame and watch “The Santa Clauses.” Plus, if you have kids, you can just tell people you’re watching because your kids want to watch it.

“Only Murders in the Building”

Not one to watch murder-centric TV shows, “Only Murders in the Building” is different compared to your typical murder-mystery show. Plus, the cast is great and works so well together. When I saw that it starred Selena Gomez, Steve Martin and Martin Short, I thought it was the weirdest trio ever. But the three of them have such great on-screen chemistry.

Of course, this show isn’t the happiest of shows; however, there are moments that will have you smiling and laughing. The adventures that the characters go on are sure to pull you in. As I said before, murder-mystery shows usually are not my jam, but this one had me intrigued from the start. It’ll have you questioning everyone until they reveal the murderers at the end of each season.

Now give me season 3 already!

During the winter, nobody wants to leave the house, and that is what TV shows are for. You can go on many adventures just from sitting on your couch with a nice glass or wine or hot cocoa. Now, what are you waiting for? Start streaming!