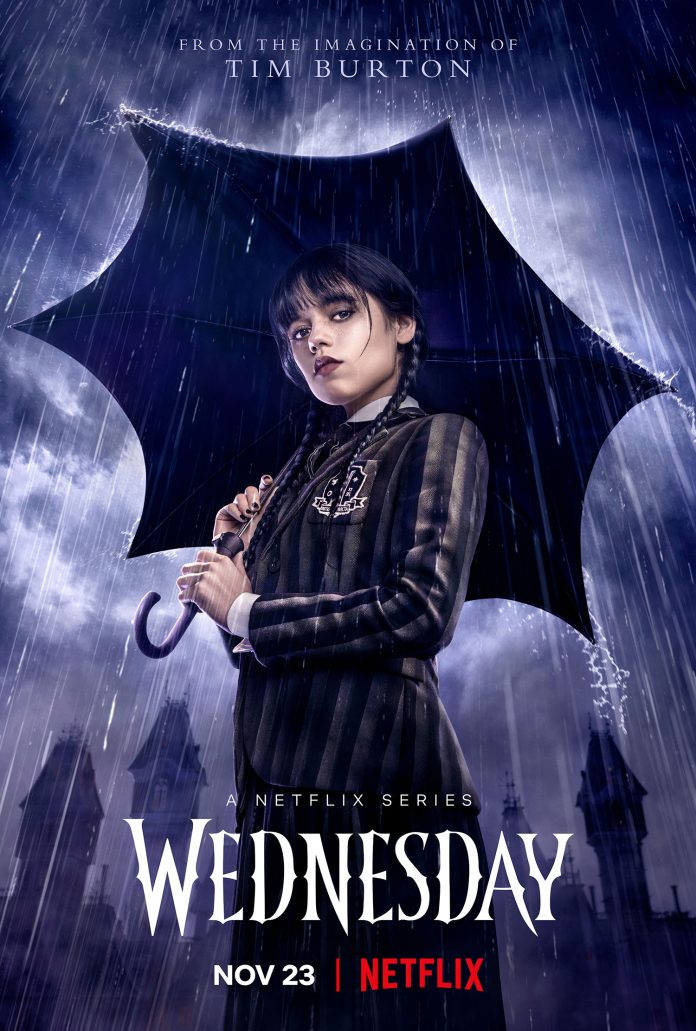 Netflix and legendary filmmaker Tim Burton brings you a new series which explores the dark comedic, fantastical and macabre world of the iconic Wednesday Addams played brilliantly by young rising star Jenna Ortega (Babysitter: Killer Queen, Yes Day). We explore the kooky and spooky adventures of Wednesday as she navigates high school as a teen, with her trademark dry and deadpan humor, genius level IQ and eccentric sadist tendencies at times. Wednesday gets expelled for defending the honor of her brother Pugsley who gets bullied and pranked by a swimming team of jocks. Wednesday decides to return the favor and drop bagfuls of piranhas into the jock’s swimming pool, causing all manner of chaos and madness. Wednesday is sent off to the prestigious Nevermore Academy in the town of Jericho, where the students are an extraordinary group dubbed outcasts with special abilities. The same Academy her parents Gomez (Luiz Guzman) and Morticia Addams (Catherine Zeta Jones) attended 30 years prior. She is met by her happy-go-lucky roommate Enid Sinclair played by Emma Myers, her rival and school Queen B. (Bianca Barclay), the mysterious school heartthrob Xavier Thorpe, town loner Tyler Galpin (Hunter Doohan), his father Sheriff Donavan Galpin, and the no nonsense Principal Larissa Weems (Gwendoline Christie). And we are introduced to teacher Marilyn Thornhill played by Christina Ricci, the original Wednesday from the 1990’s Addams Family movies. The Addams Family and its characters were originally created by cartoonist Charles Addams in 1938. The characters have been part of pop-culture ever since.

“Wednesday’s attempts to master her emerging psychic ability, thwart a monstrous killing spree that has terrorized the local town and solve the supernatural mystery that embroiled her parents 25 years ago – all while navigating her new and very tangled relationships at Nevermore.”

We get to explore Wednesday’s family and Latin background, expanding the Addams Family universe for a new generation of audiences while respecting the charm that made the character iconic. Jenna Ortega does a great job of being dry in her humor but still expressing different facets of Wednesday through her expressions and eyes. For those that were not aware of Jenna’s talents, I believe this show will rocket her to superstardom. She is a brilliant young actress. We also get introduced to more of the Addams clan such as Uncle Fester and more. The series was created by Alfred Gough and Miles Millar, who also created the Smallville TV series 20 years ago with another iconic character.

WEDNESDAY is available to stream on Netflix.