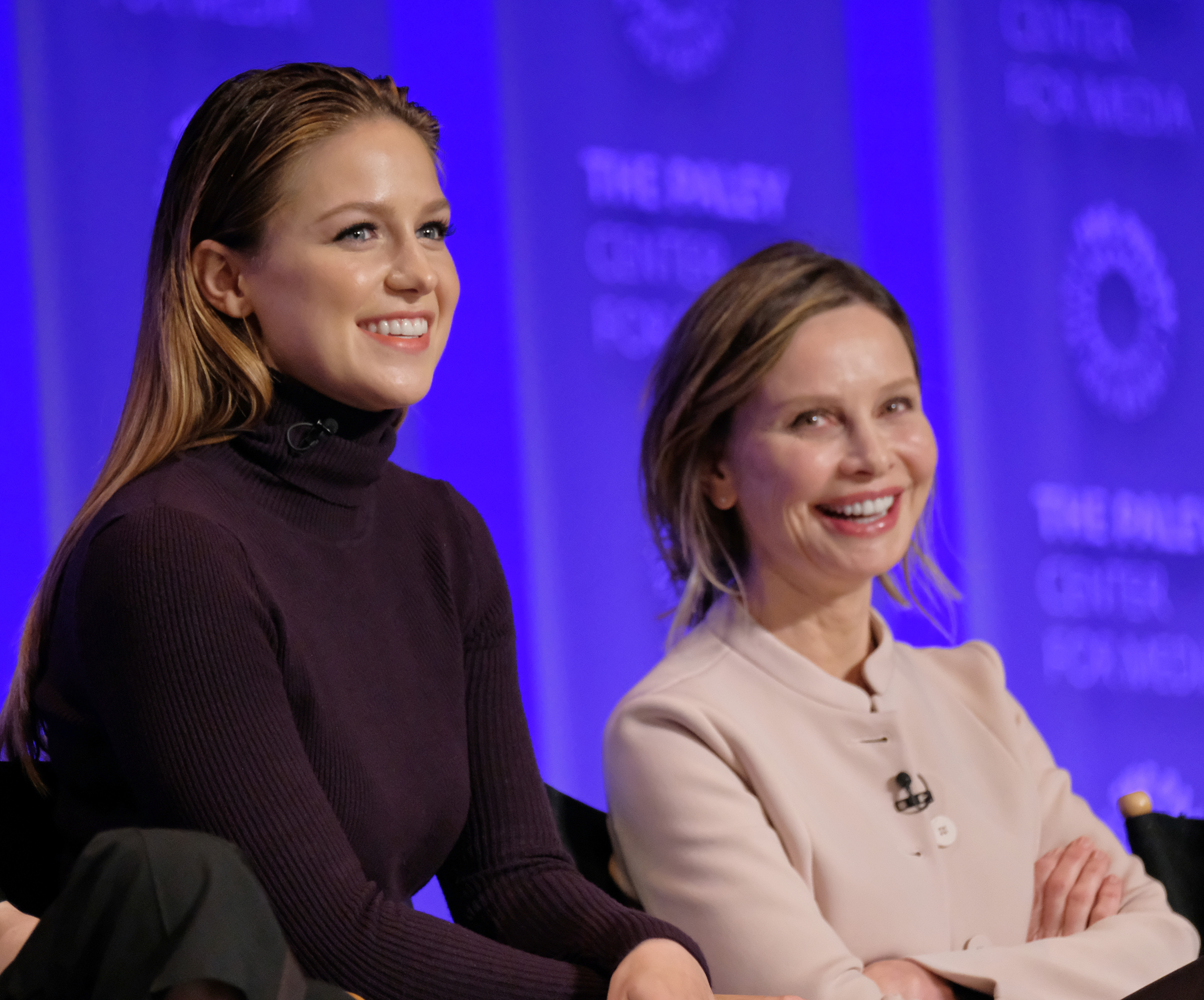 There was a lot to enjoy at the Supergirl panel at Paley on Sunday, but the most startling announcement was made by actor Jeremy Jordan, who surprised the Paley audience by declaring that he thinks his character, Winn Schott, who has previously declared his love for Kara, should be gay. The declaration came in response to a twitter question read by moderator Leanne Aguilera. Aguilera directed her question towards producers Ali Adler and Greg Berlanti, and referred to this tweet she’d received when she’d solicited questions via Twitter.

The audience cheered and clapped at the question. “There’s no immediate plan right now,” Greg Berlanti began, but was interrupted by the audience’s laughter caused by Jeremy Jordan and Mechad Brooks being separated by David Harewood as they attempted to embrace, as he was unfortunately seated between them. Bertlanti carefully steered the discussion away from LGBT representation to the more broad topic of wanting the audience to identify with characters regardless of whether the characters represent their own identities – which is a fair point – but disappointing for many fans.

Winn getting a boyfriend became a running joke of the evening, but Jeremy Jordan’s earnestness and sincerity kept it from feeling like a joke at Winn’s expense. When talking about the upcoming crossover with Berlanti’s CW show The Flash, Mechad Brooks admitted he was jealous of Grant Gustin’s character on the episode, and talked about how good-looking and nice and tall and funny he (and his character) were.

“Cool for Winn,” Brooks deadpanned. The audience responded with laughter, as did the cast. “I’ve got boys coming out my ears,” joked Jordan.

It’s clear by their playful teasing throughout the panel on any number of topics – including a prank that involved a remote controlled farting machine, and spontaneous eating contests – that the cast and crew of Supergirl is not just friendly but familial in their interactions, teasing each other like siblings, and one also gets the sense that the Supergirl cast has a little bit of good-natured sibling rivalry with the casts of Berlanti’s CW shows. At one point, an audience member asked Berlanti which cast he preferred – the cast from the Flash or the cast from Supergirl – and Brooks and Harewood stood up and walked across the stage, pretending to walk out in mock indignation. Another woman asked if they had ever done karaoke with the Flash cast and asked them who would win in a sing off. “We would definitely win,” Melissa assured her. “We would destroy the Flash cast in everything!” Brooks added, to more laughter and applause.

For the final question from the audience, the cast was asked which superhero they would like Supergirl to team up with. Several of their selections revealed superhero aspirations from the cast. Leigh picked Batgirl, hinting that with all the technology at the DEO, it would be really easy for someone (presumably her character) to become Batgirl. Brooks picked Green Lantern, and added, “And, I look like him, so….” Hopefully the DC people at Warner Brothers are listening! Harewood declared that he’s already playing his favorite superhero, Martian Manhunter, and that he’d stick with him, to audience approval, but the answer that got the most laughter from the audience was Flockhart’s, when she stated, sounding a little like her notoriously grumpy spouse, that she didn’t know any superheroes, so…whoever.

Panel attendees were also treated to a screening of the full episode the day before it aired on CBS, and it is definitely one of the best episodes of the season, filled with strongly emotional performances from Benoist, Leigh, Harewood and Flockhart. The episode focused on Kara being exposed to red kryptonite (as opposed to the usual green kryptonite). In the comics, kryptonite comes in all the shades of the rainbow as well as silver and gold, with each shade having a different effect on Kryptonians.

There have been a lot of interpretations of the effects of red kryptonite on Kryptonians over the years, both in comics and onscreen, but this episode does something slightly different, and treats Kara’s behavior after being exposed to red k almost like a mental illness. The parallels are subtle, but definitely there. Supergirl has been accused of being hamfisted about certain topics, but this is treated delicately, and reverently. As painful as it is to see James’ reaction to Kara to her behavior while under the influence of the red k, that too is accurate to the experience of people with mental illness. “Sometimes heroes fall,” Cat Grant intones solemnly in the episode. A person’s heroism is sometimes defined not in whether they fall, but how they get back up again. The rest of the season – or the next few episodes, at the very least – are going to have to deal with the repercussions of Kara’s behavior under the influence of Red K, both professionally as Supergirl, and personally as Kara. For more stories by the author, visit Women Write About Comics!