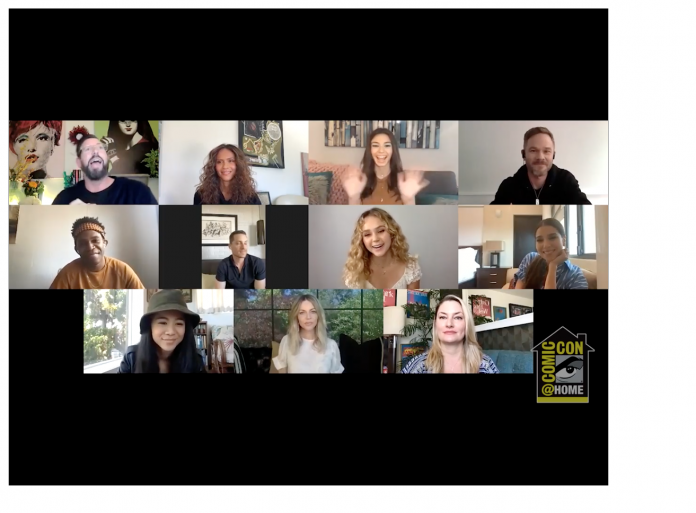 HNS watched the 2021 Comic-Con @ home’s panel for TV Guide Magazine Fan Favorites, and it did not disappoint! If you missed it, don’t fret! We recapped it all below.

Here’s what we learned watching the panel:

– Kaitlin Olson spoke about how everyone calls her Sweet Tea, the dog she rescued, and how social media has changed the game. Myspace was the social media people had back when they first started.

– Madchen Amick talked about secretly filming in Burbank for Twin Peaks, and fans coming around and filming the cast shooting the show. They had to put out a message to fans, saying please don’t post spoilers so the mystery stays alive. Riverdale is completely different, it’s all about social media. She struggled at first with this, but has found her place online because she is a big mental health advocate.

– Shawn Ashmore stated he gets confused for his twin… everyday. He said he most gets recognized for being in X-Men. He reported it’s incredible to see yourself in superhero costumes, but not the most comfortable thing to wear. Nicole Maines said she can relate, as her costume is glued to her face (she wears a mask on Supergirl). Brec Bassinger also can relate and said her costume is so tight, it has literally left bruises on her body. Ouch!

– Jesse Lee Soffer spoke about the loyalty of soap fans and how funny it is that they truly believe the actors are their characters. He was also asked about “ship names” and fan fiction, and he laughed about how he was not prepared for this at all and it’s crazy.

– Lesley Ann Brandt – The moderator talked about how perfect it is that she is on this panel, because the Lucifer fans would not back down, and ultimately saved Lucifer. Lesley said she was in New Zealand, mentally preparing for the next project, not thinking it was going to be saved, then she was in disbelief because they were in limbo not knowing what was going to happen. She was so happy for the fans that they were successful in bringing the show back.

– Nicole Maines spoke about how Supergirl uses social commentary and talks about things going on in the world, while also remaining positive. She said the world needs this optimism and fun, and Supergirl and Stargirl deliver that.

– Nicole Maines spoke about how she is in the same boat as the fans, as the audience, and she said everything that trans kids are feeling, seeing the first trans superhero, she is feeling too. She spoke about how they are going through it together except she has to sit on a lot of secrets for months because she films the show and can’t talk about it until it airs. She is so proud of the Dreamer comic that came out in June. She spoke about how important it is that her character and other LGBTQ+ characters are treated as three-dimensional characters, like all people. She spoke about Dreamer’s relatability.

– Roselyn Sanchez talked about the importance for her to represent Latinas, to always play Latina. She spoke about how she’s been fortunate to always play characters who are educated, fierce, incredible women. She feels lucky and blessed to play so many incredible Latina women.

– Madchen Amick spoke about being on Fantasy Island (previous version) and that it just wasn’t timed well. Roselyn Sanchez said their Fantasy Island is more mysterious and darker, and also full of a soul searching journey and in the end, learning something that is valuable in life. She said it is full of laughs and it was important for her to keep it funny.

– Leah Lewis talked about how fun it was to play a lesbian, French ghost from the 1800’s. She said it was a stark difference playing both sides of her character, and learning about French culture and the language. Jesse Lee Soffer joked that he couldn’t even begin to imagine playing that character and asked how she played her. Leah Lewis responded, “prim, proper, sexy but like oppressed sexy” which elicited laughs from everyone.

– Leah Lewis also spoke about how it is amazing to see more into her character George’s family life and what their household looks like and how detailed the set decorators were, down to what trinkets were there, food left on the stove, etc. to show more of an Asain household. She stated it was really cool to have a conversation about the different iterations of racism that both Asain and Black communities see. The writers even included her and Tunji Kasim (her fellow actor on the show who plays her love interest) in the conversation about how to approach these issues on the show.

– Leah Lewis was asked about her film The Half of It, and she said it was so fun playing a character who is 2nd generation Chinese, as she grew up in the US and so is actually very different than this character and how they each grew up. She said she learned a lot about herself playing her, and also so much about Chinese culture. Seeing how people reacted to it was her favorite part of being in the film.

– Camrus Johnson spoke about getting a Black Batwoman and how important that was, how cool it is to talk about Black people stuff all the time, because half the cast is Black. He said there were conversations with the writers, and how they can now talk about Black hair, police brutality, and they can hit many topics because they now on the show have a Black nerd, a Black woman on the streets, and a Black cop. He said he felt very lucky to have a dark arc at the end of the season and touch on so many things. He spoke about the “Blerds” aka Black nerds and how happy he is, because before he would only get auditions for drug dealer type roles. He is so happy to play this nerdy, clumsy, super smart character. Camrus said he is a Blerd himself too, and he still plays video games. This prompted a funny bit between him and Shawn Ashmore and his 2 video games he has.

– Jesse Lee Soffer was asked about how it’s an interesting year to start working on a cop show. Jesse said it was difficult, the writers tackled a lot of the issues going on head on. He said at the end of the day, he is an actor/ entertainer, but he feels a responsibility to tell the truth, because that’s how good shows and good acting is made. He spoke about how this is such a macro problem. They did an episode about George Floyd, the character was named something different, but it was that story. But this is a show told from cop’s perspectives so it has to stay true to that. The show made connections for people, and made people think. He said in a lot of the episodes, everyone is wrong and there’s no good outcome, because in so many of these situations there is no good outcome.

– Camrus chimed in that he did one episode of Chicago PD, and he thinks why the show is so successful is because of the actors and how much they care. He said that he remembers Jesse coming to the set early just to watch him film his scene. He said Jesse celebrated the episode and the audience, and he appreciated how well they treated guest stars.

– The moderator spoke about the different causes the actors are passionate about. Madchen Amick is a mental health advocate. Kaitlin Olson is passionate about helping animals. She is currently fostering 2 cats and spoke about how important that is. Brec Bassinger advocates for diabetes. She said this hits close to home for her as she is a Type 1 diabetic. She told the story about how distinctly she remembers when she was first diagnosed.

-The moderator asked everyone what their weirdest fan encounter was. Here are their responses:

– Lesley Ann Brandt: a fan had traveled all the way from Italy to a convention she was at to show her the tattoo of her face that he had tattooed on him.

– Nicole Maines: She had the strangest request on Cameo. They asked her if she knew the rules of the road and what is her favorite rule of the road? The rest of the actors teased her that it has to mean something dirty.

– Shawn Ashmore: He also agrees his weirdest is a tattoo. They were on the show Ink Masters and the person horribly messed up the tattoo and really butchered his face.

– Brec Bassinger: She said her show just came out during the pandemic so she has had zero fan encounters.

– Leah Lewis: She prefaced this with saying she feels bad because she knows the girl will know who she is if she tells this story. The same person she saw previously, popped out of the bushes outside of her complex and was like “Hey remember me?!” The fan tried to pick up her dog and swing him around. And her dog barked and freaked out. The actors all said Stranger Danger! to this.

– Roselyn Sanchez: She was at an awards show, and this guy came over and proposed (without a ring) and everyone around was like, “that’s so sweet!” and she said he was serious and thinking he was going to be her husband. A sweet one was a woman ran into her at the store and told her she named her daughter after her, spelled the same way.

– Madchen Amick: She said she has seen so many Shelly tattoos from Twin Peaks, that she’s used to it and warned all the actors to just wait. She has also had people say they named their child after her character, and even some Madchens after her name. But Madchen means “little girl” in German and people didn’t know that so some boys were named Madchen. Nicole Maines chimed in that she’s down with the fluidity and this is the future liberals want. To which Madchen agreed and everyone laughed.

– Jesse Lee Soffer: His favorite fan story is a real life rescue encounter. He was walking home from dinner with another actor, and there was a car they saw in a ditch from an accident, and they pulled a woman out. And she was disoriented from the accident but recognized them from the show and was confused.

– Camrus Johnson: He said he knows the fan that Leah is talking about. She had ran up to him on the street yelling his name and had pictures of him. He was confused how she had pictures of him and she said oh they were in the back of my car. She told him she just saw Leah Lewis last week. He said she was super nice though and she gave him hand sanitizer that he still has. His weirdest encounter story is that he was in a store in Vancouver, and was looking for a trash can to buy. He kept going in different directions, not able to find what he was looking for, and he turned around. And there was this young Black girl who popped out and was like, “Ok you’re right, I was following you.” She said she was a fan and she was super sweet, and they hugged.

– Kaitlin Olson: She said she gets really uncomfortable. She has so many from Philadelphia. Once all the shots were ruined because everyone was out on their decks screaming things like, “I made you some pasta!” Someone tried to give her Beer, then pulled his pants down and showed her his penis.

-The last question was what each of them are fans of. Here’s what they said: