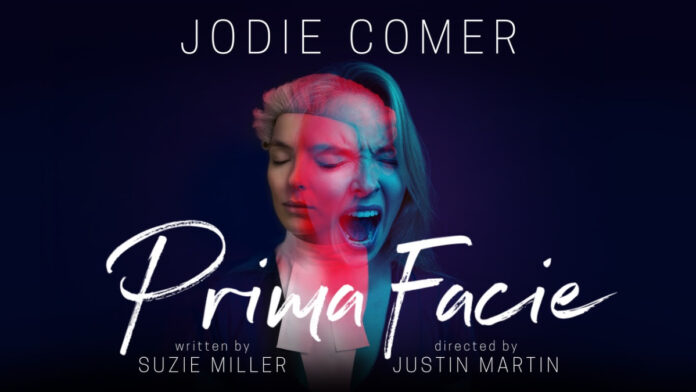 It’s the news theater lovers and Jodie Comer fans have been waiting for – we finally have dates, a theater, and additional information for the play’s Broadway run! Read all the details below and be sure to grab your tickets now at Telecharge.com.

Jodie Comer
makes her Broadway debut in
the US premiere of
Prima Facie
A new play by
Suzie Miller
Directed by
Justin Martin
opening Sunday, April 23, 2023
at the Golden Theatre

Jodie Comer today said, “I cannot wait to continue the journey with Prima Facie on Broadway this coming spring. Never in my wildest dreams did I imagine having the opportunity to play on Broadway with a story as unique and thought provoking as this one. I’m honored that a theatre as rich in history as the Golden Theatre will be home to it.”

Prima Facie will play a strictly limited engagement for 10 weeks only. Tickets are on sale at Telecharge.com.

About the play: Tessa (Comer) is a thoroughbred. A young, brilliant barrister. She has worked her way up from working class origins to be at the top of her game; defending; cross examining and winning, until an unexpected event forces her to confront the lines where the patriarchal power of the law, burden of proof and morals diverge.

The West End production of Prima Facie worked with The Schools Consent Project, a UK-based charity founded by Kate Parker that educates young people on issues surrounding consent and sexual assault. In addition to fundraising and donations, the production worked with the charity and various school groups to foster further understanding and education. Empire Street Productions announces that Prima Facie on Broadway will continue to work with The Schools Consent Project to extend the organization’s outreach to US schools.

Prima Facie will also work with Everyone’s Invited, a digital safe place for survivors to share their stories completely anonymously. Founded by Soma Sara, Everyone’s Invited provides many survivors a sense of relief, catharsis, empowerment, and gives them a feeling of community and hope.

The production is also pleased to announce The Prima Facie Pro Bono Project, which will offer a low-price ticket lottery and rush policy for every performance to ensure economic accessibility to the production for all. The initiative will also provide special free ticket access to specific partner and community organizations. Further details about the initiative will be announced closer to the start of performances.