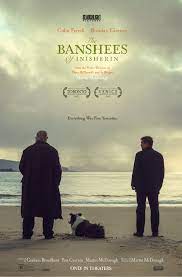 “Banshees” has been on my list for the good part of 2022. The story begins simple but unfolds into something greater. Padraic, a farmer on the remote island of Inisherin, finds himself in a conflict when his lifelong friend, Colm, abruptly ends their friendship.

Padraic goes out of his way to amend the friendship and understand why Colm would do something so cruel. What follows is a series of events that escalate the conflict, providing unexpected consequences.

From the talented cast to the stunning cinematography, “Banshees” had a lot going from it from the get-go. When I saw that Colin Farrell and Brendan Gleeson were headlining a story that takes place in Ireland, I was sold!

We’re treated to some breathtaking cinematography featuring the luscious greenery and breathtaking rock formations of the Irish coasts. Each scene transports the audience to feel as if we’re in this quaint setting with the characters.

I really enjoyed the performances, too. The two leads are great, but Kerry Condon and Barry Keoghan offer impressive turns as Padraic’s allies.

The most unexpected aspect of the film was the underlying symbolism in each portion of the plot. The story challenges us as an audience, asking if the conflict is just a butting of heads between two simple men of good nature, or if the existing conflicts within Irish culture mirror their conflict. I was a bit mixed upon my original viewing of the film. But thinking about it more and more, I can see the craft that binds this story together.

The film highlights repetitive sequences of the Irish war, small communal relations and the idea of preserving something worth forgetting. These ideas are explored thoroughly through the actions of Padraic and Colm. But what is most interesting is how it affects those around them, dividing and creating tension among those uninvolved.

Categorizing negatives of this film would be more of an interpretation of the viewer. I don’t think the film is one that I care to revisit very often, but it certainly left me with some poignant head scratchers. The dark ideas and events explored might be unpleasant for the average viewer.

I found certain aspects of the story to be difficult to put together on a first watch…which is the problem. Unless one is willing to put themselves through this bleak story multiple times, I could see “Banshees” being a bit of an unfulfilling experience. The story is layered like an onion and how long one can stand peeling back the layers is going to vary.

I also found the final act to go a bit too far with stamping these ideas into our heads. The events are shocking to a fault. This also comes at the expense of the runtime. The film could have been shortened in the final act while still developing these interesting ideas. I felt slightly burnt out by the end.

“The Banshees of Inisherin” is a surprisingly thoughtful, little story that is definitely worth checking out. It probably won’t resonate with everyone. Those who enjoy indie flicks will likely be satisfied.