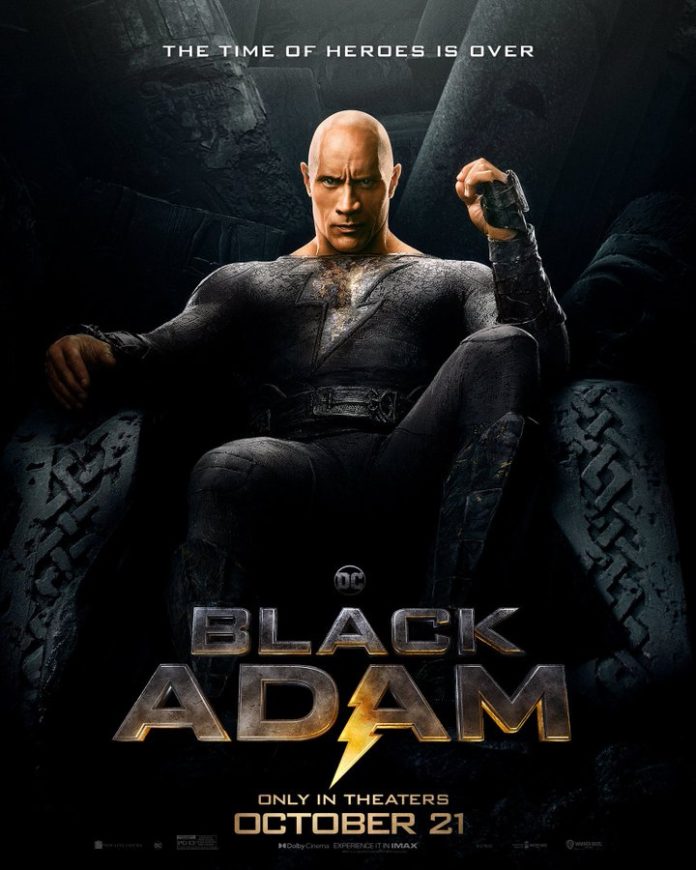 Black Adam has been nearly 2 decades in the making; 15 years in fact since Dwayne’ The Rock’ Johnson was originally chosen to play Black Adam. It has proven to be a labour of love for Johnson to get this film made, and finally the dream came true. It is currently the number one movie in the world. A movie, a passion project for himself and fans the world over, Dwayne Johnson has referred to it as the most important film in his career.

In an interview on YouTube with ET Canada, Dwayne ‘The Rock’ Johnson commented:

Black Adam first appeared in 1945 comic the Marvel Family opposite his arch nemesis Shazam. He has been one of DC Comics most iconic villains ever since depicting various versions of Black Adam in print. So that would make the character of Black Adam 77 years old nearing a century in existence. His origin story is born from rage and oppression he was a slave named Teth-Adam, whose family were killed and when he was blessed with God-like powers to become a champion to free his people. He achieved his goal but in his rage for vengeance, we see he did it with no mercy for his enemies, killing anybody he deemed to get in his way and was imprisoned by the wizard Shazam. There have been various versions of the man in black in the comics, games and animation. The old saying of every villain is the hero of his own story relates to Black Adam. He believes himself to be as the protector for his people and ruler of his homeland Kahndaq. Throughout the decades, Black Adam has had multiple battles with the superhero team named the Justice Society of America in different incarnations. We meet them all along with Black Adam for the first time on big screen. What adds to Black Adam is his theme music from world renowned film composer Lorne Balfe. When his music hits at the beginning of the film, you can feel the operatic, powerful sense of doom, in preparation for battle, a visceral war cry and the orchestral is absolutely epic. Creating iconic theme music for their characters is something that has been a part of Warner Bros and DC Comics lineage, going back to John Williams for Superman (1978) and Superman (1980), Danny Elfman for Batman (1989) and The Flash (1990), Hans Zimmer & Tina Guo for Wonder Wonder (2017), and Michael Giacchino for The Batman (2022).

From New Line Cinema, Dwayne Johnson stars in the action adventure “Black Adam.” The first-ever feature film to explore the story of the DC Super Hero comes to the big screen under the direction of Jaume Collet-Serra (“Jungle Cruise”). Nearly 5,000 years after he was bestowed with the almighty powers of the ancient gods—and imprisoned just as quickly—Black Adam (Johnson) is freed from his earthly tomb, ready to unleash his unique form of justice on the modern world. Johnson stars alongside Aldis Hodge (“City on a Hill,” “One Night in Miami”) as Hawkman, Noah Centineo (“To All the Boys I’ve Loved Before”) as Atom Smasher, Sarah Shahi (“Sex/Life,” “Rush Hour 3”) as Adrianna, Marwan Kenzari (“Murder on the Orient Express,” “The Mummy”) as Ishmael, Quintessa Swindell (“Voyagers,” “Trinkets”) as Cyclone, Bodhi Sabongui (“A Million Little Things”) as Amon, and Pierce Brosnan (the “Mamma Mia!” and James Bond franchises) as Dr. Fate.

Hawkman was first introduced to DC Comics in 1940, created by writer Gardner Fox and artist Dennis Neville. His alter ego is a modern-day Archeologist named Carter Hall, who has lived for centuries due to his ability and curse to reincarnate through different periods in human history, who was once the Egyptian Prince Khufu. His weaponry is made of Nth metal as are his wings which allow him to fly. He has enhanced durability, strength, speed, stamina, sharper reflexes and more which is helped by his Nth metal armour. He has amassed a good deal of wealth and is the leader of the JSA, a man who never runs from a fight and is charged with stopping Black Adam. Aldis Hodge- (One Night in Miami) brings a swagger and presence that engages you with his own story and the possibilities to come, for fans familiar with his history with his soulmate Hawkgirl aka Shayeera. We begin to witness the seeds slowly being planted even despite his clash with Black Adam.

Doctor Kent Nelson, renowned Professor, Archeologist, Surgeon and master of the mystic arts. His golden helmet of Nabu grants him God-like powers of flight, invulnerability, superhuman strength, telekinesis. His helmet has given him the ability to live longer than most, but it is also a gift and curse with the helmet of Nabu he is able to see the future when the helmet possesses him which causes all sorts of havoc in his psyche . Pierce Brosnan is a perfect embodiment of Doctor Fate. He brings a distinguished elegance and class to the role, that only someone of his standing and stature could do. He is close friends with Hawkman who he has known for decades.

The tech genius and calmness Cyclone AKA Maxine Hunkel brings, especially being one of the younger members of the Justice Society. Considering that she is the granddaughter of the original Red Tornado and has the ability to control the weather such as wind manipulation and flight, she brings a quiet fearlessness to the role. Quintessa comes across likable and interesting without the usual troupe of the young rebellious team member, she comes across very organic proving a natural fit.

Albert ‘Al’ Rothstein carries a lot of burdens he not only has to live up to carrying the mantle of his uncle the previous Atom Smasher, but also fight against the past of his family’s villainess past. His powers give him the ability to control his molecular structure (allowing him to alter the size and density of his body) to giant size, giving him super strength, endurance, stamina, and durability. He is the one-member of the Justice Society who understands Black Adams reasoning and point of view. Noah Centineo- (The Perfect Date) brings a likable naivety which makes you root for him, even though he is not the finished article as a hero yet and makes mistakes and will still give his best.

Sarah Shahi- (Person of Interest) stars as Adrianna Tomaz Freedom fighter, archeologist, University Professor, and mother to Amon Tomaz- ( Bodhi Sabongui). She is an expert on the history of Kahndaq, fiercely protective of her country being occupied, and her family including brother Karim played with fun charm by Mohammad Ameer who helps her. She is the one who frees Black Adam from his tomb, but little does Adrianna know that her journey to true freedom and power has just begun.