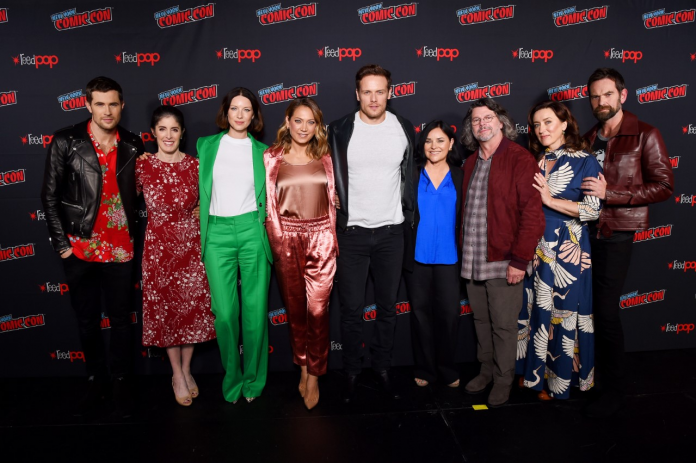 Zee did a great job with her questions.   A big difference behind the scenes this season is that Balfe and Heughan are now producers and have a say in character development and story.  Balfe said it has been interesting learning about all the off-camera things that have to happen before the actors even arrive on set.  She and Heughan expressed gratitude and admiration for the dedication of the “Outlander” crew.  Another benefit of being producers is that the cast can approach them with ideas on what they think their character should be doing, wearing, etc.  The both seem very keen on keeping the set a creative and fun place to work, which is good because they have been renewed for Season 6!

Another fun happening at the panel was this special message from cast members Sophie Skelton (Brianna Randall) and Richard Rankin (Roger Wakefield). They answered NYCC fan questions via video from set, on location in Scotland.

In case you are unaware, Season Five of “Outlander” finds the Frasers fighting for their family and the home they have forged on Fraser’s Ridge. Jamie must find a way to defend all that he has created in America, and to protect those who look to him for leadership and protection – while hiding his personal relationship with Murtagh Fitzgibbons, the man whom Governor William Tryon has ordered him to hunt down and kill. With her family together at last, Claire Fraser must use her modern medical knowledge and foresight to prevent them from being ripped apart once again. However, while focusing on protecting others, she risks losing sight of what it means to protect herself. Meanwhile, Brianna Fraser and Roger MacKenzie have been reunited, but the spectre of Stephen Bonnet still haunts them. Roger strives to find his place – as well as Jamie’s respect – in this new and dangerous time. The Frasers must come together, navigating the many perils that they foresee – and those they can’t. Season Five of “Outlander” is currently in production in Scotland and will play out over 12 episodes.