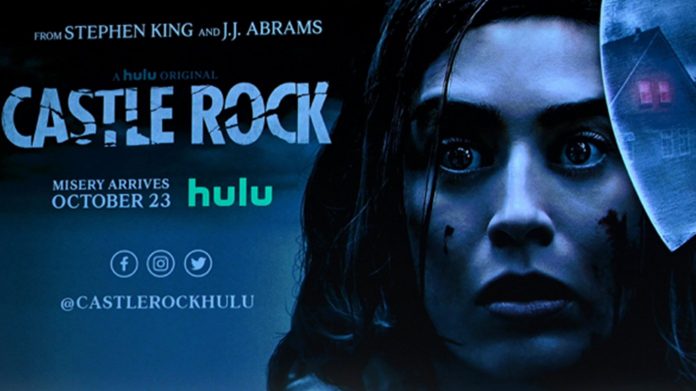 J.J. Abrams & Stephen King’s Castle Rock returns for Season 2 October 23rd.  Set in the Stephen King multiverse, Castle Rock combines the mythological scale and intimate character storytelling of King’s best-loved works, weaving an epic saga of darkness and light, played out on a few square miles of Maine woodland. Castle Rock is an original suspense/thriller — a first-of-its-kind reimagining that explores the themes and worlds uniting the entire King canon, and that brings some of his most iconic and beloved characters together in the heart of the King universe. Season two stars Lizzy Caplan, Tim Robbins, Paul Sparks, Yusra Warsama, Barkhad Abdi and Elsie Fisher.

HNS interviewed cast members of Season 2’s story at NYCC.  Having watched Season 1, I am already invested in Season 2, but it is even more exciting to me because of the Annie Wilkes backstory (also, I love me some Lizzy Caplan), so let’s start there.  Fisher, who plays Annie’s daughter, Joy, was also part of the interview and she and Caplan clearly enjoyed stepping into the Stephen King universe.

Next, we interviewed Tim Robbins who plays Reginald “Pop” Merrill.  Can I just say that Robbins has the biggest hands I have ever seen on a human?   They are like bear paws.  I should also state for the record that he was charming; I wish he could have stayed longer!  I’m pretty sure I could have found 100 more questions to ask him.

If you haven’t watched Season 1 of Castle Rock, you have time!  However, Season 2 is its own story and you will still be able to enjoy it without having seen Season 1.  You can only see Castle Rock on Hulu so do what you need to do to be ready to watch October 23rd.