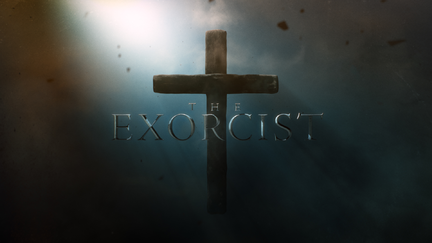 HNS chatted with Fox’s The Exorcist stars Geena Davis, Hannah Kasulka, Brianne Howey and Mouzam Makkar along with creator Jeremy Slater last week about the show’s upcoming season finale, their hopes for season 2 and much much more. Check out all the scoop below and be sure to tune in to the season finale this Friday on FOX! About Geena Davis turning to the dark side:

One thing we learned is that Geena Davis is LOVING getting to play the villain for a change. “It’s fun to be possessed. It’s great, it’s fantastic,” states Davis. She was the only cast member told ahead of time that her character would actually be turning possessed and is in fact the iconic Regan. She was the only one who knew about the shocking revelation – the rest of the cast didn’t know. “We were constantly thinking about what can we do that if you look at it later, you’ll say, ‘ah ha!’ but doesn’t give it away,” elaborates Davis about the big reveal.

It was also revealed that Angela’s possession is different. Because she invited the demon in, it isn’t the typical possession like we saw in Casey. This is integration. And integration is irreversible. “Angela is gone,” confirms Slater. We now only have bad Angela.

Also on the dark side is the elusive Salesman. Hannah Kasulka joked, “We got very close,” referring to her twisted scenes with him. She also reveals that he does Tai Chi and is a badass in real life. We learned that will be back in the season finale, and will be scarier than he’s ever been.

The dynamic of the Rance family is at the heart of the show, and it’s clear to all how important this dynamic was in establishing the story. Brianne Howey describes the family bond that stood out to her when she read the script, and states that in the middle of this horror script you have an honest, slice of life story – something you don’t often see in a horror script. She also highlights that the show has so many strong female characters and how this was important to her when she read for the role.

Kasulka echoes this and gives credit to the writers, stating that the writing was so good, it could’ve been an hour long drama. To this Slater jokes, “We’re basically This is Us.”

Kasulka talks about how Casey displays such strong empathy for her family members, going so far as to burden herself with her family’s issues. She’s a fighter, and fights for her family.

“The show started off already in a dark place because of what Henry was going through. Gina was starting to notice in the home. Kat was grieving. So it already started out like we need help. We already needed a lot of support and love and then it only went downhill. But I think for Kat, watching her own family go downhill brought her out of her dark hole because she realized that she needed and wanted to be there for her sister and her mom and her father,” explains Howey.

The uniqueness and superior writing of the show:

Production was actually delayed because they wanted the best writers. Slater said this later gave them less time to shoot the scenes, but it was worth it to get the writing to where it is.

Kasulka gives credit to the writers of the show as well, and talks of getting the complicated scripts “Basically every script I got I was like, ‘Ooh. I don’t know if I can do this. And that never went away really… there were moments in the script where I went how am I going to pull this off?”

“The genre will sell depending on if you believe in it,” says Davis.

Mouzam Makkar highlights that her character really just purely believes in love. This isn’t necessarily the same belief Father Tomas has though, because his profession prohibits this. She states that Jessica knows that this love will never be, though in her mind Tomas can have both [love and his profession].

The future of The Exorcist:

There was a lot of chatter about how Season 2 (if Fox renews) would be set up, and Slater confirmed that Season 2 will be a continuation… with “the characters who survive.” Previously he’d stated that he can’t guarantee that both Father Marcus and Father Tomas will survive the season finale this week.

Fingers crossed we will get to see the story continue in Season 2! Be sure to tune in to the season finale this Friday on FOX and be sure to share the hashtag #RenewTheExorcist as the show waits to hear if they get a season 2!