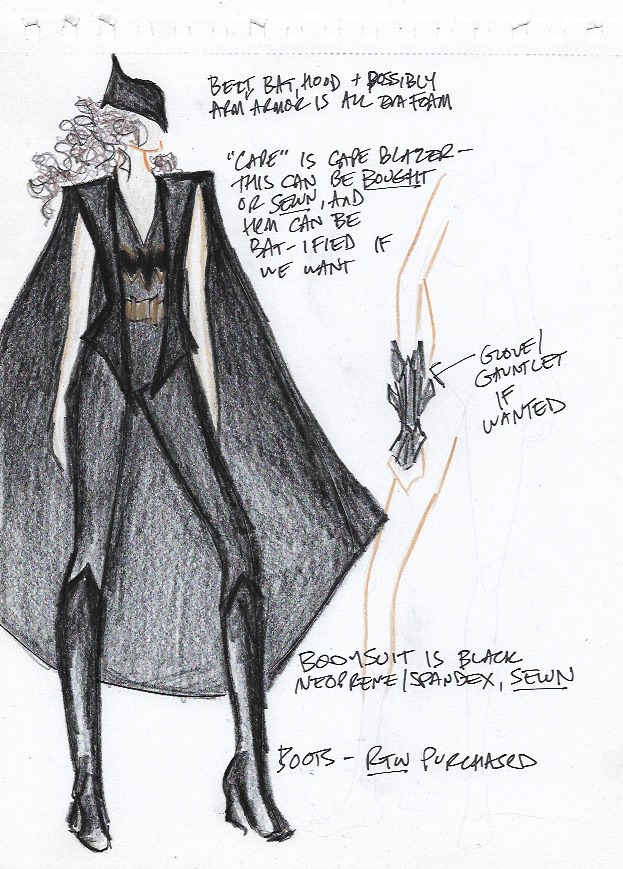 HNS recently had the privilege of interviewing Marcy Harriell, a woman of many creative talents. She has appeared on stage in tiny little shows like “Rent” and Lin Manuel Miranda’s “In the Heights” and movies such as “Death Proof” (Kurt Russell and Quentin Tarantino, anyone?). And if all that weren’t enough, she is super nice and really excited to share her latest venture with us all.

Harriell has her own sewing series, “Re-Fashion” on NBCUniversal’s streaming on-demand subscription service, Bluprint. Bluprint is all about teaching the creative arts to folks of all skill levels and they do it well. In fact, Harriell used the service’s predecessor to learn how to sew! At this point, I must confess that I cannot sew. Not for lack of trying, mind you (lies I tell myself). As I told Harriell, my talent is mostly in buying all the tools I need to start a new hobby and then abandoning them to collect dust. I am a Dust Collector! My sewing machine is nice and dusty but I after talking to Harriell I feel inspired to clean it up and get to sewing. HNS: Why did you start sewing?

Harriell: I always had an interest in fashion, which I used as a kind of armor to protect me from what was going on around me. I was very shy and used fashion to hide and protect me. Sewing was a natural progression and then became an obsession. I found the community to be very supportive, which I loved. No one in my family sews. I taught myself on the internet and now have been sewing for 8 years.

HNS: Tell me how you hooked up with DC Comics.

Harriell:  I have a series on Bluprint called, “Re-Fashion.” When DC Comics approached Bluprint to do a collaboration, Bluprint came to me to help make it happen. As a comic book fan, it was a dream come true. In fact, I was sketching costumes one night and looked up from my sketchbook and said to my husband, “I’m sketching art work to send to DC Comics!” Together we worked on DIY costumes for four iconic DC Superheroes: Batman, Superman, Wonder Woman and Aquaman.  (Yes, the sketches posted are hers for this project!)

HNS:  That sounds like an amazing experience!  I’ve told you how skilled I am with a sewing machine (i.e., I own one), are these costumes something I could do or are they for someone with more experience?

Harrriell: First, I truly believe that anyone can create. Regardless of your skill level, you just need to make it your own. You be your own superhero! The costumes were designed so that anyone could make something. There are step-by-step instructions to follow. If you need to start with something simple, like a cape, start there and then use those new skills to move and make another part of the costume.

HNS:  Do you have to have a sewing machine?

Harriell:  A sewing machine is best but not necessary. There are ways to make the costumes with little or no sewing involved. You should also not feel you have to have a fancy sewing machine. The sewing machine I used to film the episodes was very simple, just thread the needle and you are ready to go. HNS:  Can you tell me more about the Bluprint episodes?

Harriell:  We filmed four episodes; one for each superhero costume. All four will be available to view on Bluprint beginning October 4th. Each episode has downloadable patterns to follow and list of class materials I recommend to have on hand. Each episode also has a discussion area where learners can post pictures, ask for help or advice or just show off their new creation. I answer a lot of the questions myself!

HNS:  I have to admit that sewing is a bit intimidating to me, any advice?

Harriell: Abandon all fear! Anything you make, you will love, and in the creative community you will get love too! Another maker will always support you just for trying. Even if what you are doing doesn’t work, you will learn something. Are you ready to get started? Bluprint is making is easy for you by offering an “all access pass,” free for a limited time with the creation of an account between October 5th and 12th. Why not give it whirl? There are so many fun things to discover and sew!