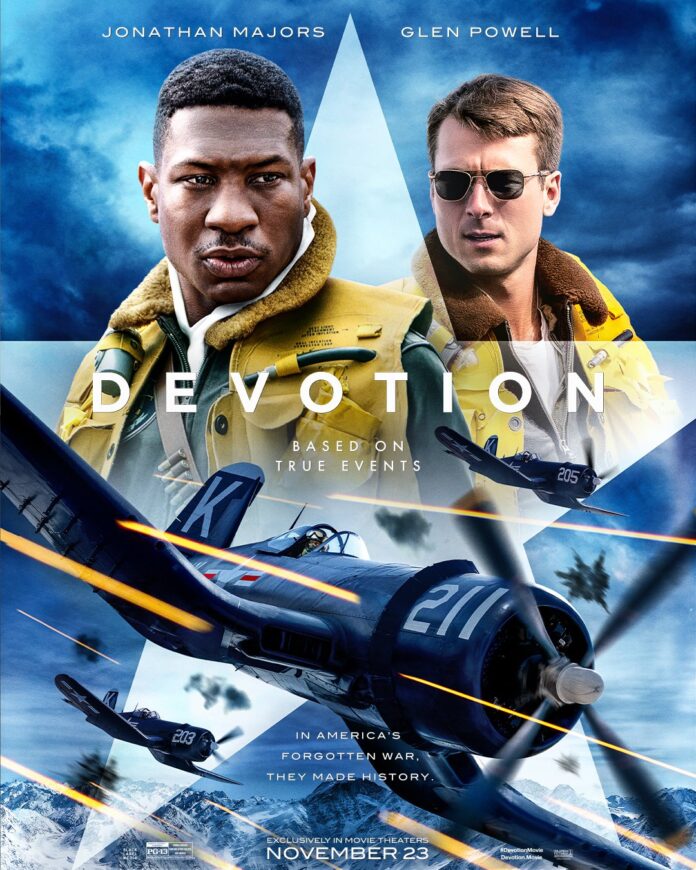 After the success of “Top Gun: Maverick,” it’s inevitable that “Devotion” would draw comparisons. Although this film is very different, I still think its worth checking out.

The story follows Jesse Brown, a black man who is struggling to find his place as a naval aviator. He meets pilot Tom Hudner, who offers him friendship and guidance amid rising tensions within the Korean War. Jesse and Tom must forge forward to become successful pilots and get the mission accomplished.

I’d say “Devotion” is a solid film that is a bit forgettable. Unfortunately, It wasn’t marketed much and seemed to escape the general public, which is a shame. It also comes on the heels of one of the most memorable films in recent years – “Top Gun: Maverick.”

I really enjoyed that the film told a character-driven story between two men of different backgrounds. Through the trials they face, their friendship becomes stronger. Jonathan Majors and Glen Powell give solid performances as the leads, too.

My favorite aspect of the film (which could hurt it among mainstream audiences) is that is doesn’t feel like much of a Hollywood film. There weren’t many sequences that feature boisterous music or over-the-top action sequences. It’s a nice change of pace.

The conclusion of the film was also satisfying. It stayed grounded and rewarded the audience with an emotional sequence between two friends. It was a fitting end to their story.

While there’s a lot to appreciate in “Devotion,” the film feels a bit dull. It’s like a low-stakes history film that doesn’t leave much of an impact on the viewer. There wasn’t much energy one way or another. It’s a serviceable piece of historical exposition without having much fun in the process. The film definitely feels like it will satisfy a niche audience rather than the larger movie going crowd.

The story being told struggles to fill the runtime too. It didn’t need to be as long as it was for the narrative being told. I’d normally look for a historical film to enlighten me as a viewer with details I might not know about, or even provide context to an era I never got to experience.

Again, the film doesn’t have any glaring issues. But I must say that it’s not a historical drama that’s a must-see. This is mainly for historical purists.

Overall, am I happy I saw the film? Yes. Would I feel differently if I hasn’t seen it? No.

“Devotion” manages to tell a nice story that is largely forgotten while never reaching the strides it could have. Check it out if you are a history buff or want to catch Glen Powell in another aviation movie. Streaming is likely the way to go. But if you’re picking between the two aviation films this year, definitely see “Top Gun: Maverick” instead.