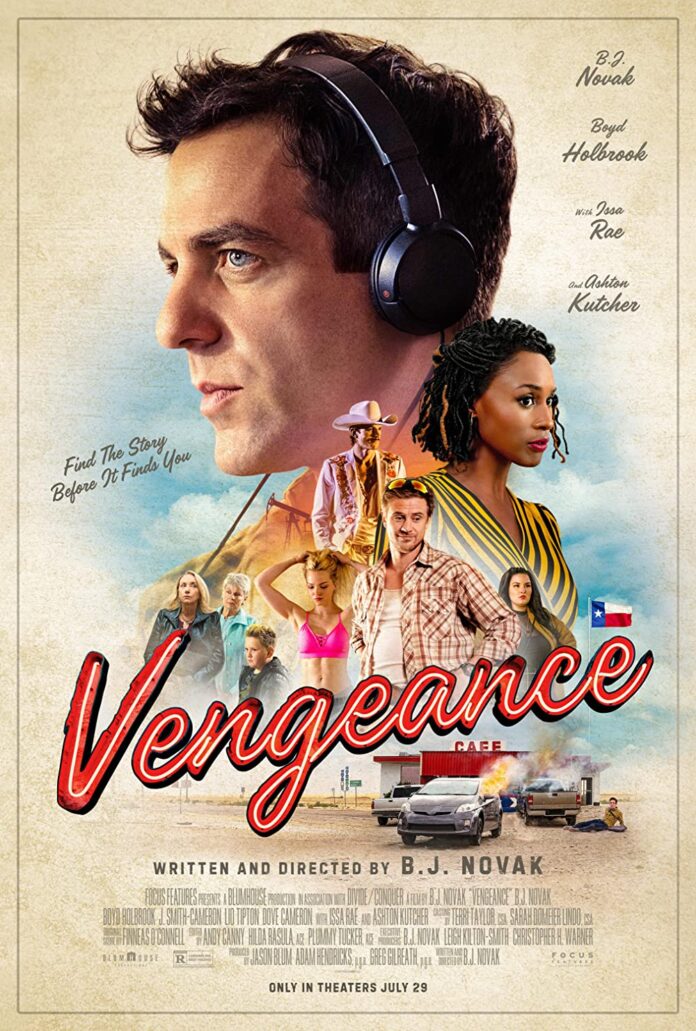 “Vengeance” will likely go down as the best movie no one saw in 2022.

We follow Ben, a writer from New York who gets a call about the murder of a girl he was casually dating. Her family insists he come to Texas and help them investigate her murder. He sees an opportunity to create a juicy news story that features commentary about America.

This was the most surprising film of 2022. “Vengeance” got very little marketing before its release and didn’t seem like a particularly unique film. I happened to catch it on streaming after its initial release.

The fact that this won’t be a contender during awards season is criminal! The most impressive aspect of the film is the originality. I’ve truly never seen a film quite like this. The writing is some of the strongest I’ve seen all year, featuring razor sharp dialogue.

Some character interactions were absolutely hilarious, while others were downright tense. The performances were also incredible. B.J. Novak finally gets a lead in his directorial debut, providing a thoughtful performance as Ben. But the standouts were Boyd Holbrook and Ashton Kutcher. Holbrook plays a heartful, loyal Texan who counters Novak’s individualistic, New York personality. But Kutcher features some of the most captivating acting of his career. He was incredible and would be my pick for best supporting actor.

The film is paced very well, featuring a seamless shift in tone throughout the story. Sometimes it’s very funny but is also able to switch to dramatic and heartfelt. What is amazing is that we get to know the girl who is murdered while she’s not even with the characters anymore. While each character recaps periods of Abilene’s life, her presence is felt through voicemails and old videos of her singing.

The commentary in the film is very compelling, too. I often find commentary in film these days to be pretentious, bashing audiences over the head with a self-indulgent message about how they should feel regarding a particular subject. Here, we get a look at the divide in America from a perspective that allows the audience to make decisions for themselves. We get to examine the different subcultures in the U.S., seeing where a NYC reporter might have a creative, intellectual strength, but also where a rural Texas family can provide him with warmth and a sense of family. It doesn’t demonize one side or the other, but rather opens perspective and growth for each character. It’s surprisingly thoughtful and a rare treat from a film clearly wanting to say something.

I truly don’t have anything that I would say takes away from “Vengeance.” Certain elements throughout the complex story might leave viewers looking for answers beyond the screen. I’d say the subject matter might not be a “broad audience” appeal, but I do believe most viewers will find profound analysis of the ideas explored.

To conclude, “Vengeance” is a sleeper hit. I can’t recommend it high enough and hope that it develops a cult following one day.

The story is very creative, featuring timely analysis of America and the divisions we face. But it does so with an optimistic, yet frank outlook. This is one of the year’s best films and shouldn’t be missed!