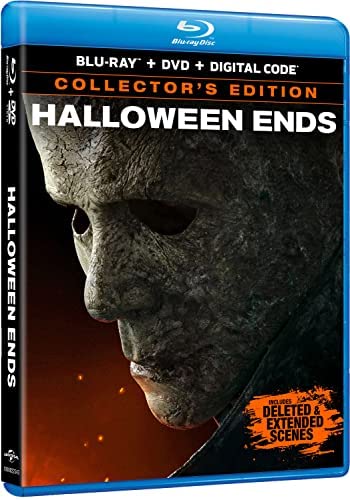 Thanks to Universal Studios, we had a chance to review the Halloween Ends blu-ray combo pack with our very own copy! Below is our description and analysis of the product. Be sure to pick up your copy on 12/27/2022!

The most acclaimed and revered horror franchise in film history reaches its epic, terrifying finale as Laurie Strode (Curtis) faces off for the last time against the embodiment of evil, Michael Myers (James Jude Courtney). Michael hasn’t been seen for four years after the events of Halloween Kills. Laurie lives with her granddaughter Allyson (Andi Matichak) and has chosen to liberate herself from fear and rage and embrace life. When a young man is accused of killing a boy he was babysitting, a cascade of violence and terror is ignited with a final confrontation between Laurie and Michael unlike any ever captured on screen. Only one of them will survive.

HNS Review: Halloween Ends is a film that creates discussion. It brings a fresh take on the series that could divide the fandom, exploring areas of the franchise never seen before. A bit of a jumbled narrative hinders this final chapter from being truly great. That being said, it delivers a satisfying conclusion in the end.

About the product: One of the product’s best features is the flexibility. It offers a blu ray, dvd and digital code. This gives viewers the option of streaming or hard copy, allowing easy access to watch anywhere! This is a nice feature to have during the holiday season. I love the design of the product. It comes with a slick outer sleeve featuring a textured design on Michael Myers’ mask. Halloween fans will eat this up! The imagery is creepy and sets a tone that builds up to Laurie and Michael’s showdown.

About the special features:

Deleted and Extended Scenes – This section of the product is short and sweet. It features extended sequences that go in depth where the film chose to be more concise. My favorite deleted scene was “Michael Shakes Things Up”. It extended the atmospheric interaction between Michael and Corey, providing more insight into Michael’s whereabouts over the years. Most of the other scenes were extra filler. They are nice to have as bonus features but I’m glad they were cut from the film.

Gag Reel – I loved the blooper section! It was nice seeing how much fun the cast had making the film. It’s clear each person associated with the production has passion for the franchise. It was especially heartwarming to see Jamie Lee Curtis share how personal her journey as Laurie Strode has been. The character seems to be a part of her, so seeing the cast and crew celebrate her legacy was very special. As viewers, we don’t generally get to see how filmmakers interact with their cast and crew. What was nice is that David Gordon Green tried to keep an upbeat energy on set to counter the dark nature of the film.

Extras and Feature Commentary – The most fascinating aspect of the extras was seeing how the filmmakers crafted the finale. It’s clear that David Gordon Green wanted to bring something new to the series, featuring commentary about overcoming trauma and moving on. I found the Corey storyline to be a bit jarring considering it was never teased in 2018 or Kills, but hearing Green’s reason for pivoting was helpful in understanding the time gap. The film has a unique visual style that I really enjoyed. Seeing how the team came together to give the film a continuously eerie vibe was a cool feature. Another area where the film succeeded was the kill scenes! We are provided with an in depth look at how the team set up the death sequences. Kudos to the makeup/effects team for the creative exploration to make each scene more gruesome and terrifying. I also loved how the final confrontation was setup. Green wanted to provide a satisfying fight between Laurie and Michael, which is evident based on how committed the actors were to make the battle feel earned.