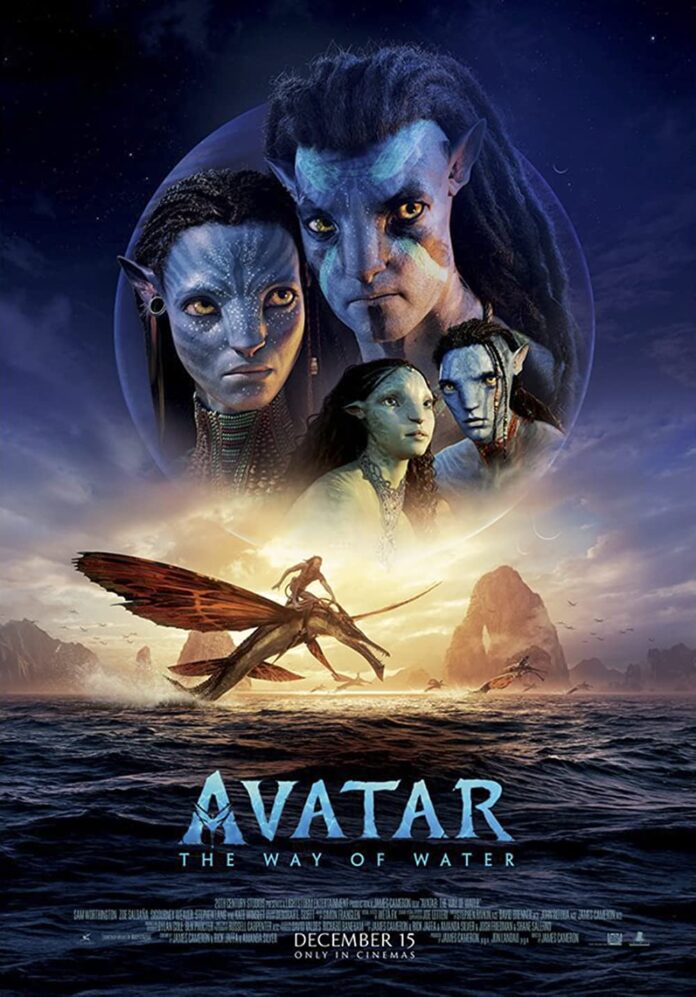 After 13 years, the highest grossing movie of all time gets a long-awaited sequel!

“The Way of Water” picks up after the first film, where Jake Sully is now living full-time in his Avatar body. He and Neytiri have created a family and are living as the leaders of the Na’vi. But when a foe from the past resurrects, Jake must take his family into a new environment and prepare for the battle that lies ahead.

The original “Avatar” broke ground with its visual effects. To put it simply, “The Way of Water” continues this feat with special effects that are quite literally unbelievable. The amount of detail that went into the world building was very impressive. James Cameron has clearly spent these years creating new avenues to explore Pandora in the most immersive way possible.

The film is true escapism and does a phenomenal job at transporting the audience into this new world within Pandora. The underwater sequences were just stunning. The 3D especially helped this experience. I felt like I could reach out and touch certain pieces of the screen as the events were happening.

The characters are another piece to highlight. A complaint I had about the original was the lack of interesting character progression. They were all distant on a relational level and felt a bit thinly sketched. Here, I felt a more humanistic approach because of the introduction of the children. This added another layer to Jake and Neytiri, as they are forced to examine themselves in a different light and make decisions that will impact the future of their family. This was a nice touch and a welcome change to the direction of their characters.

The standout performance was Stephen Lang, who returns as the villainous Quaritch. He was far more interesting in this story. Since he was resurrected as an Avatar, he is forced to reexamine himself to adapt to the ways of his enemy. This makes him a more formidable foe and sets up a very fascinating future for his character. The final act is also jam packed with action, emotion and heart. It left me feeling fulfilled while being curious about what happens next.

While “The Way of Water” was a step in the right direction, there are certain elements that it borrows from the original which hinder it from being truly great. I still feel like character development and a centralized story take a back seat to visual spectacle.

While the visuals are groundbreaking, a story has many elements needing care and craft. There are still aspects of this overarching story that don’t come together, continuing to tease audiences with the “you don’t see the big picture yet” idea. If each film in this franchise feels incomplete and just a teases a sequel, I could see movie goers who are casual fans getting worn out.

Some dialogue was spotty as well, especially with the kids. At 3 hours and 12 minutes, the runtime is something to consider. Especially if you have a weak bladder…plan accordingly! The film is clearly structured into three acts: the intro, the water sequences and the final battle. Each feel very distinct, almost as if they could be their own movies. This creates a clunky pace and feels a bit strange in execution.

Sigourney Weaver also returns but in a different role (as a teenager). It was easy to tell that the voice wasn’t fitting the body and it created a strange way about her character.

But the biggest issue I have with the film is the longevity. “The Way of Water” is meant to be seen on the biggest, loudest screen available. I believe the film won’t age as well without these large-scale effects. Cameron’s classics like “Terminator 2” and “Aliens” will stand the test of time on any screen size…and I don’t believe “Avatar” will.

This long-awaited sequel likely won’t convert those who disliked the first, but it will elevate the energy and worldbuilding fans of the original were drawn to.

Me? I’m somewhere in the middle. I enjoyed my return to Pandora but still believe there are improvements to be made. This is a full-scale blockbuster done by the best of the best in James Cameron. It’s immersive, creative and a bit hollow at times.

Get out and see it in IMAX 3D for the best experience!