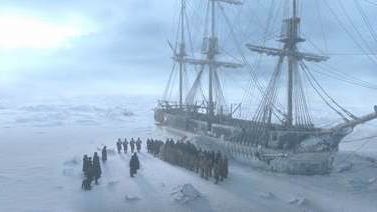 AMC is bringing a new show to the horizon, and with it an off-site Wondercon experience to set the stage for the new show. We were there to test out the waters and get a glimpse into what’s in store for the new show. “The Terror” is a suspenseful thriller that follows a British Royal Naval expedition as they set sail in search of the Northwest Passage. Faced with treacherous conditions, limited resources, dwindling hope, fear of the unknown and attacks by a mysterious predator, thecrew is pushed to the brink of extinction. The series is speculative fiction based on the lost voyage where more than 120 crew members inexplicably disappeared. Their fate is one of the enduring mysteries of the age of exploration. This epic series features distinctive imagery and landscapes, with a visual quality that is emblematic in scale and scope of a Ridley Scott production.

“The Terror” is produced by Scott Free, Emjag Productions and Entertainment 360 in association with AMC Studios. In addition to Scott, Kajganich and Hugh, the series is executive produced by David W. Zucker, Alexandra Milchan, Scott Lambert and Guymon Casady.

The Wondercon off-site event was really fun, and I highly recommend stopping by. It featured two main parts. The first part when you walked in was a 360 degree video featuring a lot of historical looking men and women and a lot of dialogue of what is presumably going to be on the show. I went in with a large group so it was hard to hear/ see the specifics of what was going on, but it definitely set the mood and showed us the overall tone of the show.

After this, the group was led to a second room which featured a boat (resembling a lifesaver boat) complete with individual seats. This part was so cool. There was nothing but white on display as we  sat in the boat and waited for the next part. Suddenly a video began playing, similar to the one in the first part of the exhibit, but with a more direct storyline. The best part of all is the exhibit featured a TON of fake snow pouring down on us as we sat and enjoyed the experience, complete with air conditioning blasting. Several times throughout this part, fake snow would pour down. I’m not talking a small trickle, it was a LOT. This really set the stage for the whole experience and made it really fun. We also couldn’t stop laughing at each other and our (fake) snow covered heads. Overall this was definitely a fun experience that gave a little taste at what’s to come for AMC’s The Terror. I’ll definitely be tuning in!