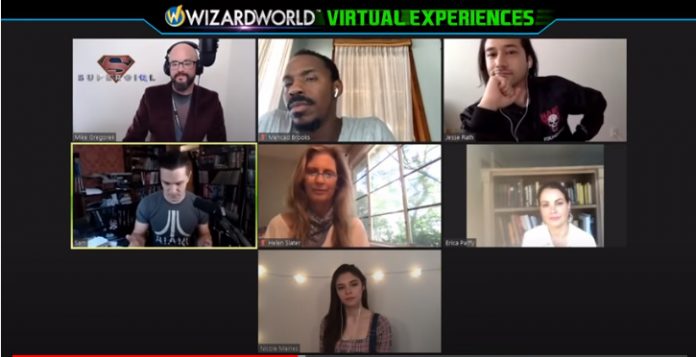 The first question went to Mehcad and asked about the fan reaction to show which he felt extremely humbled by. He went on  to talk about meeting fans of all ages at various events reminding him why he does the show. Mehcad revealed that the story of harassment by the police at 8 was his own story.

Jesse Rath spoke about his first days on set, what is was like joining the show that he was a fan of. Adding that he was familiar with a lot of the actors mentioning Mehcad he had watched on True Blood. He was asked about whether he would like to play the original Brainiac the traditional enemy of Superman.

Sam Witwer said he felt a little uncomfortable about portraying Ben Lockwood and his extremist views and praised the writers because he felt that it was an important story to be told.

Nicole spoke about learning and the job and how happy she was to join the show and how welcoming and judgement free the cast and crew were. Nicole is proud of Nia being a cool and popular superhero not just within the LGBT community. She also declared herself the strongest hero on the show.

A question from the fans had the guests thinking about the toughest day in terms of stunts. Mehcad and Sam spoke about an accident where part of Sam’s costume came off and impacted with Mehcad’s eye. Mehcad described it as part of the role as Sam was very apologetic. Jesse also reveals that his favourite Brainy colour is green.

Here is the link to the full event