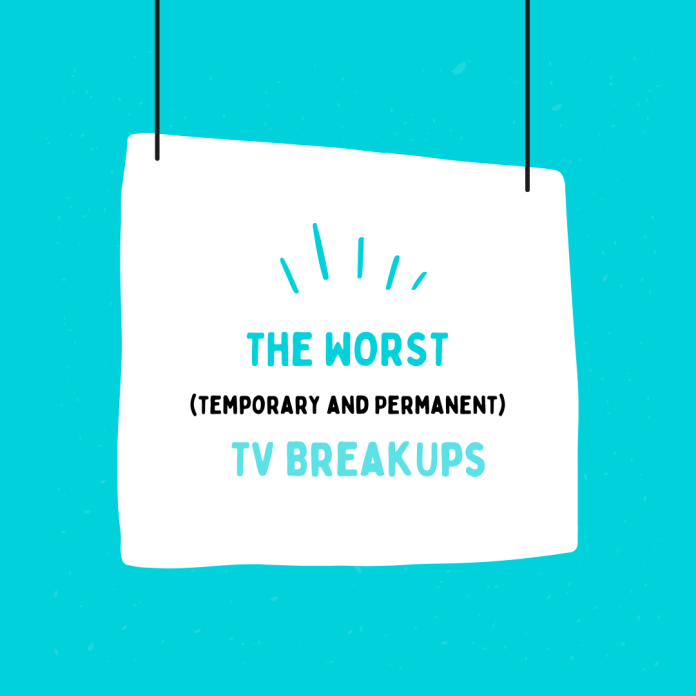 We present the worst (temporary and permanent) TV breakups.

Getting invested in a TV show is fun, until you start shipping a couple on the show. You swoon along with them; you laugh with them; you cry with them. It’s a good time. And then BAM: they break up. It’s disappointing, for sure and can leave you feeling a little salty.

Here are some of the WORST TV break ups — permanent and temporary:

Morgan and Park, otherwise known as Parnick, originated sometime in season 4 of the show. What started as a casual hookup soon became more. I have always been a fan of enemies to lovers, so immediately, when they introduced Morgan and Park as a couple, I was invested. Sign me up for that angst!

The two had their tiffs, sure. Like every relationship, sometimes you don’t see eye-to-eye with your significant other. We saw this a lot in season 5. Between the “I love you’s” and cute moments, there were some unpleasant moments, as well. We can’t forget about the riff they had over Park’s recliner when talking about moving in together.

However, the final straw was Morgan choosing a job over Park. He soon realized that he would never be enough and ended it…at the worst time ever, too. Now we have to endure their disdain for each other, while I sit there watching in annoyance. I was rooting for you two! I still have hope they’ll reconcile, though.

Is it really considered a breakup when both parts of the couple are dead and they just decide to move on to the afterlife? This may not be classified as a typical break up, but in a way, it was, and it still hurt.

Eleanor and Chidi were the definition of opposites attract. Eleanor really didn’t care about anything or anyone, and Chidi cared a little too much. He was an intellectual all about ethics and morals, and well, Eleanor certainly was not. That’s what made their relationship so entertaining to watch. I immediately shipped them together.

I was so happy when they finally got together, and when the show ended, we knew it might not be a happy ending. Chidi had decided to leave The Good Place before Eleanor was ready, signaling the end of their relationship. So, while it wasn’t a typical breakup, it still was in a way. It was a bittersweet moment, for sure.

I am still salty that Haley and Andy didn’t end up together. Instead, Haley ended up with her deadbeat high school boyfriend who did not make her any better. The reason I liked Andy and Haley together so much was because he made her a better person. She really matured while they were together.

As soon as they called it quits, she reverted back to her old ways, which is annoying when a character comes so far. Andy was also such a likable character, despite him not being a main character. Again, they were complete opposites, but they just worked. She was the pretty popular girl, while Andy was more of a dorky underdog. I can always appreciate when that happens.

On the other hand, “Pitch Perfect: Bumper in Berlin” — the spinoff TV show to the “Pitch Perfect” franchise — stars both of the actors who played Haley and Andy. Maybe we’ll get endgame between their new characters.

Although temporary, Leslie and Ben breaking up because he wanted what was best for her career was equal parts upsetting and understandable. Ben always wanted Leslie to succeed, and he knew that she would be a great Council Woman, and he didn’t want to be the reason why she couldn’t chase her dreams. Nothing but respect for Ben Wyatt — the perfect TV man to ever exist.

Eventually, the two did end up together, getting married. However, during the time they were apart, I didn’t love it. I knew they were meant to be together, and I knew they eventually would be, but that didn’t stop my shipper heart from breaking just a little bit. After all, when you watch a show, you’re never sure of the direction that is going to be taken.

“Once Upon a Time’s” Emma Swan and Killian Jones

This temporary misunderstanding of OUAT’s ship, Captain Swan, pretty much broke me. Shortly after Emma’s return from the Wish Realm, Killian learns a dark secret from his past — he killed Emma’s grandfather back in the day. He tried to keep that information from her, having just proposed to her. When Emma witnessed Killian about to burn his memories, she called off their engagement until he learned to trust her. Did I mention this destroyed me?! They really tried to temporarily end Captain Swan?

Killian is then swept away by the latest villain, and Emma believed him to have left her for good. It was a terrible misunderstanding that caused a lot of angst for fans, not knowing when Emma would actually learn that he was taken away by the villain unwillingly. Once Killian could communicate to her that he didn’t want to leave her, my shipping heart was able to rest. Still, it lasted unnecessarily long.

It all ended up okay, as the two ended up married with a baby. However, that whole storyline for the sake of angst was frustrating for a shipper.

So, there you have it. TV is a lot of fun to get invested in, but just make sure that when you start to ship a TV couple, you’re prepared in an eventual breakup of some sort. Or maybe try not getting too emotionally invested in a TV couple. Who am I to say, though?