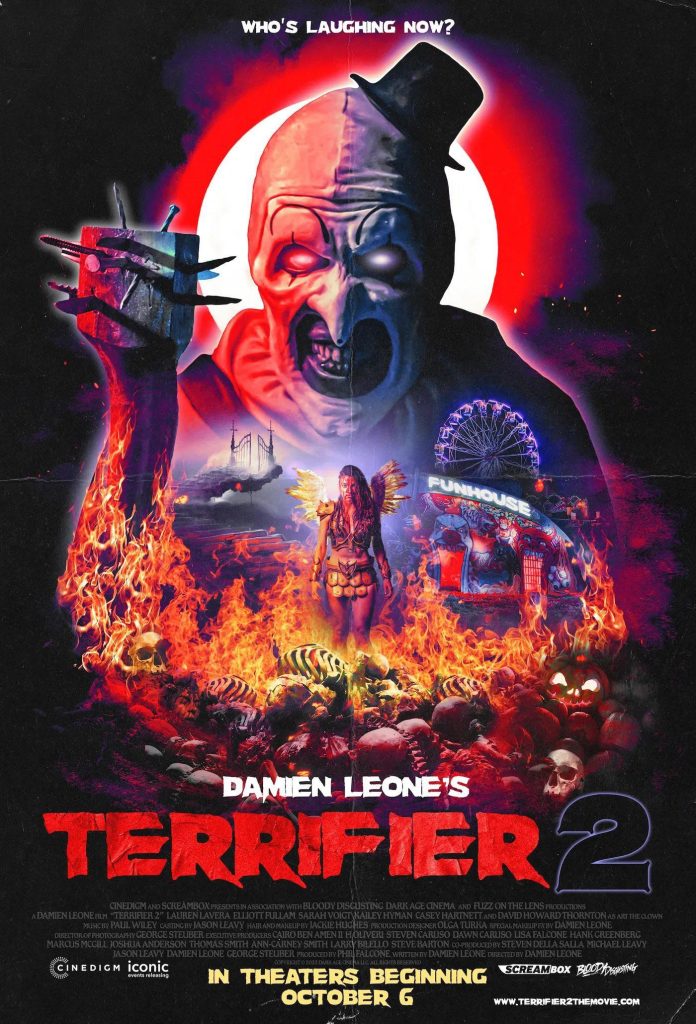 I’ve finally gotten around to the movie that supposedly had audience members vomiting and leaving the theater in disgust. Now I can understand why.

“Terrifier 2” picks up after the events of the first film, where Art the Clown is resurrected by a sinister entity. He continues his murderous rampage before he encounters a young girl and her brother, who might be a greater challenge than he expected.

I’ll always support directors who utilize practical effects over CGI. “Terrifier 2” follows in the footsteps of the original in this way. It’s clear that Damien Leone wanted to create a gruesome slasher film that felt hypnotically grimy — he succeeded.

I’m impressed with what the film crew was able to accomplish on such a small budget. I also think the story was slightly stronger than the original. We have characters with backstories that are mildly developed, which makes them easier to care for.

The cinematography is also well done. The color scheme follows the same style as the first with the sharp hue patterns and contrasts. Unfortunately, this is where my positives conclude.

I hate to say it, but “Terrifier 2” is one of the most unpleasant filmgoing experiences I’ve had all year. I kept hearing how much of an improvement this was to the original. I disagree — in fact, I think it’s quite a bit worse.

The film attempts to add more story and intrigue to the film’s leads. However, what we get instead are lackluster performances (minus Lauren LaVera) and some painfully awful dialogue. Since the characters get more screen time, we spend copious amounts of time with them…caring very little about what happens in the end.

The runtime was egregious, too. I can’t fathom why a slasher of this kind needed to be 2+ hours long. It felt endless! There were so many sequences that felt prolonged in order to make up for the lack of competent characters in the original. The film could be trimmed by an half hour and still tell the same story. I hope Damien Leone finds a better balance for the inevitable “Terrifier 3.”

I similarly found myself frustrated with the supernatural bend given to Art’s character. The idea felt half-baked and never led to anything interesting. None of it was explained and asked more questions than it could answer. These new ideas felt like an uncontrolled artistic exploration rather than a compelling move forward with the villain.

What I really enjoyed about the original was the simplicity of it. Art was terrifying as a psychotic clown who conveyed a lot of emotion through his miming, leaving his backstory and actions ambiguous. However, this time around, we got shoddy ideas thrust into a story that goes nowhere. Sometimes it’s better to keep things simple and scary.

The absolute worst thing about the movie was the gratuitous violence and gore. My tolerance for violence in horror movies is pretty high, but this left me appalled. The boundaries pushed by the film were truly disgusting. The film creates an experience that tells us that it’s okay to torture children, revel in pain and find some form of entertainment in the blood-soaked nightmare that Art the Clown creates. I don’t think this kind of violence is entertaining nor creative. It’s grotesque and concerning.

I don’t think this film should have been widely released, as the general public could find this deeply disturbing, in the worst way possible.

Instead of building Art as the next great horror icon, the filmmakers are more interested in exercising gruesome misfortunes rather than creating the next great final girl or a terrifying new slasher icon. Its too bad that “Terrifier 2” doubles down on gore and forgets to make a compelling story.

I didn’t have a good time with this highly anticipated “Terrifier” sequel. It adds unnecessary mythos and random explorations to a character that was terrifyingly simple.

The torture and violence is elevated to a disturbing level that will only satisfy the most intense gore hounds. I could even see other horror fans sitting this one out. I suggest anyone considering seeing “Terrifier 2” to do the same.

There are plenty of other horror films that 2022 has gifted us. Run to those instead!