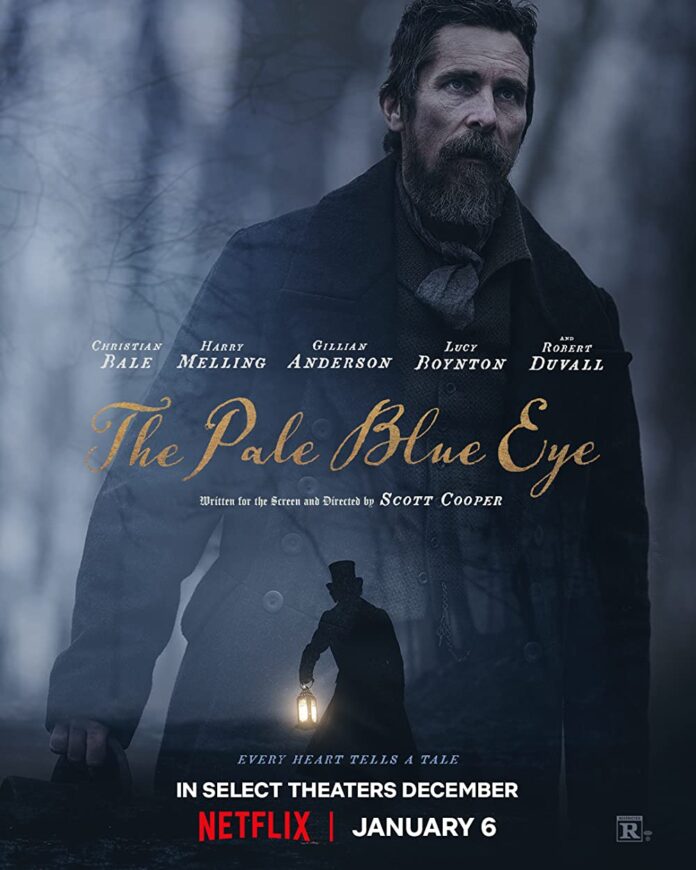 “The Pale Blue Eye” is a thriller that approached quickly. But Christian Bale helming an icy cold murder mystery is too enticing to miss! He plays Augustus Landor, a detective hired to investigate the murder of a West Point cadet. He meets a young Edgar Allen Poe, a cadet who doesn’t blend in with the student body. Together they attempt to unravel the mystery of the case before the murderer strikes again.

The story ingredients tick every box of my movie preferences. The cast, setting and plot all sounded top notch. To say I was excited would be an understatement. I’m happy to say it mostly satisfied expectations. The winter setting with the hilly New York landscape really captures the bleak nature of the story. The claustrophobic feeling of being stuck on the West Point campus in frigid conditions really amplified the tension. Cinematography on every level was excellent. Scott Cooper always delivers in this way. Christian Bale gives a great performance as expected. His somber presence as a veteran detective counters Harry Melling’s performance as Poe nicely. He on the other hand is quite animated, brimming with personality and intellect. Their teamwork makes for a nice pair of leads. The story moves patiently, allowing us to bask in the mystery and uncertainty as the murders keep piling up. I’ll also admit that the third act twist caught me off guard. Some may find this revelation a bit grim but I felt it fit nicely into the story being told.

I realize this kind of movie won’t be for everyone. It’s quite grim and leans into the darker side of the murder mystery genre. But if you can handle the slower pace, the rewards are abundant. Some audience members might get a bit restless as the film is very dialogue heavy and doesn’t hesitate to spend long spouts in dark rooms. Certain story elements aren’t exactly exciting, but I’d say the immersive tone of the film makes up for it. There are some spotty special effects particularly during the climax as well. But with a Netflix production I’m sure the budget was put elsewhere.

This is a refreshing return to form for director Scott Cooper. The stunning setting and tense story is a welcome return for the genre. It’s a shame that this won’t get more recognition during awards season. Definitely check it out because Christian Bale and Harry Melling turn in impressive performances.