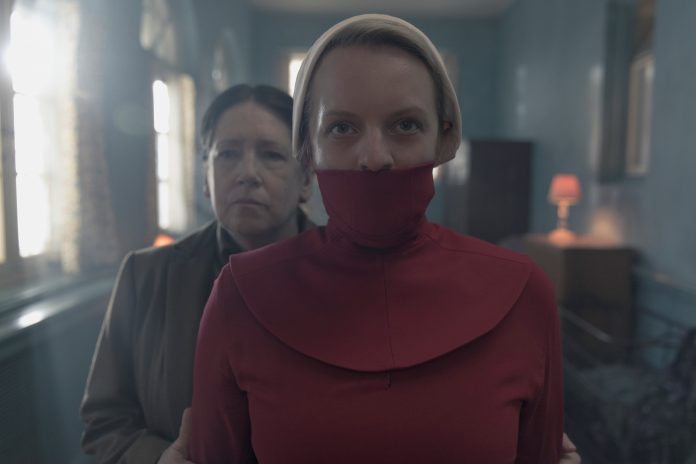 The Handmaid’s Tale season 3 is in full swing, and we’ve got a recap of episode six below! It’s winter in Gilead and the Marthas are praying for the return of baby Nichole. Waterford wants to borrow June for a weeklong press event – a public prayer gathering in D.C. He wants the whole household to be visible, to strengthen their plea to the Canadian government to return Nichole.

June sits next to Aunt Lydia on the train to D.C. When they arrive, June quickly learns that the capital is even more strict than other places in Gilead. She is expected to kneel in a designated spot in the train station until the Waterfords come to collect her. The handmaids around her have muzzle-like collars covering their mouths – and it is clear that they are expected to remain silent at all times.

June, Rita, and the Waterfords are to stay in the home of Commander and Mrs.Winslow. There, they discover that the Winslows have an astonishingly large number of children – three boys and three girls. June will sleep in Ofgeorge’s room. The visitors are surprised that the Winslows still have a handmaid with so many children already. They are clearly a very powerful family. When June meets Ofgeorge, she discovers that the woman’s mouth has been wired shut beneath the muzzle she wears. The next morning at the photo shoot, she confirms this is the case for all the handmaids in the capital. The Waterfords film in the center of a kneeling circle of handmaids and Commander Waterford addresses the cameras, saying that they pray for Nichole to be returned. June looks uncomfortable and angry throughout the filming. But when Nick arrives at the shoot unexpectedly, Commander Waterford asks him to sub in for him in a few photos – where he captures June smiling.

After the cameras are off, June asks Serena why she is going along with Waterford’s plans. Serena explains that seeing Nichole changed everything for her. June reminds her that the horrors of Gilead haven’t changed – even if her feelings have. Waterford interrupts the conversation to say that the Swiss want to speak to the Waterfords on behalf of the Canadians – as a neutral third party. The whole household must be there. When they arrive for a meeting with the Swiss, the Waterfords speak with them first. June is then asked to talk with them alone. Commander Waterford objects but the Swiss ambassador insists that this is necessary for negotiations. Serena warns June not to do anything stupid.

When she is seated in the private meeting room, June asks for the assistants to be sent out so she may speak to the three representatives of the Swiss government alone. She explains that she is the child’s mother and wants Nichole to stay in Canada. They explain that Gilead has a powerful military and Canada does not want to go to war. June asks what she has to do to keep her child safe. They say that they need information on Gilead from a high-level official. They know about her relationship with Nick – they’ve heard the cassette she sent to Luke in Canada. June says she will get Nick to talk to them. They agree that this will be enough to keep Nichole safe.

Back at the house, Commander Winslow congratulates Waterford on getting the Swiss to come to the table for negotiations and hints at a promotion on the horizon. He also touches Waterford flirtatiously as they share a game of pool.

That night, the Winslow’s Martha comes to summon June from her bed. Nick is waiting for her outside. They kiss for a moment before June tells him about her agreement with the Swiss. He doesn’t want to talk to politicians or get involved with a foreign government, but she asks him to do it for their daughter. He agrees. The next morning, June paces as she waits to hear what happened in the meeting. One of the Swiss diplomats tells her the news. They didn’t trust Nick. The deal fell through. He’s on his way to Chicago, and the Swiss will continue discussions about Nichole’s future. June is furious. The diplomat tells her that Nick has done bad things – but June doesn’t want to believe it. She asks Serena  – and discovers that Nick was one of the soldiers who helped make Gilead what it is.

The next day, Aunt Lydia finds June in her room and presents her with a muzzle of her own to wear for that day’s filming. June asks Aunt Lydia if she wants the handmaids silenced, and the Aunt says she does not. They are both tired from this trip and ready to go home, and both tear up during the conversation. Then, Aunt Lydia unexpectedly hugs June and tells her she wants to help just one person if she can. And that the person she most wants to help is June. They cry together for a moment, and then June obediently puts her muzzle on, with Aunt Lydia’s help. Before the cameras roll the next day, June walks up to Lincoln’s memorial and sees that the statue’s head and torso have been destroyed – probably years ago. Serena finds her there. The women take the opportunity alone to say exactly what’s on their minds. Serena wants to be free of June. June wants Serena to know that she will not be free of her until Nichole and Hannah are safe. She makes it clear that she despises Serena – for going back on her word, for her part in creating Gilead – for everything. June ultimately has the last word before the two part to begin their performance for the cameras.

They exit the memorial to see a crowd of handmaids outside – lined up in rows with heads bowed in prayer. Serena, June, and Commander Waterford stand on the steps of the memorial as filming begins. Waterford leads a prayer for the group, and June kneels – signaling the other handmaids to follow suit. June’s eyes move to the huge cross ahead of her – made from what once was the Washington monument. From her determined expression, we are left to guess whether she is praying for her daughters or praying for the world to burn.