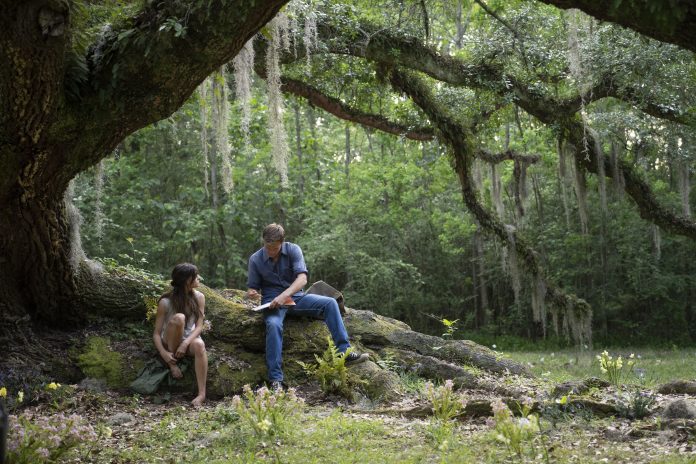 Romance, midcentury vibes, and murder intertwine in Where the Crawdads Sing, the new film based on the 2018 novel by author Delia Owens. The movie stars Daisy Edgar-Jones as Kya Clark, who is better known as the Marsh Girl by the townspeople of Barkley Cove. The story intertwines two timelines – Kya growing up as a young girl in the marshes of 50s North Carolina, and then years later as a young adult who finds herself the prime suspect in the murder case of the town hotshot.

Watching as someone who has not read the novel (yet!), I found myself really captivated by the interplay between the two timelines and how they filled in each other’s gaps in the story. Kya’s childhood, filled with abuse and abandonment, was heartbreaking – but I loved seeing her determination and creativity in finding ways to survive.

While Kya is largely on her own, she does have some significant helpers along the way. General store owners Jumpin (Sterling Macer Jr.) and his wife Mabel (Michael Hyatt) keep an eye out for Kya and act as surrogate parents in a way, teaching her how to read and supplying her with clothes and shoes from church donations. Tate (Taylor John Smith, and Luke David Blumm as Young Tate) also works with Kya on reading and writing, provides invaluable companionship (from friendship to an eventual romance), and sets her on a path to a career in illustration. While the Tate relationship in particular has its ups and downs, seeing Kya find community in her own way in the marsh – and have her “people” later on during the trial – was one of my favorite parts of the film.

Speaking of the trial, the film does a great job of keeping you guessing between multiple possible suspects. The prosecution and the defense present evidence that made me think Kya definitely did it, and then feel sure of the opposite. Was the death an accident? Was it Tate? While you do ultimately find out the answer, I loved that the movie kept me guessing right up until the very end. David Strathairn was also a standout for me in the trial and surrounding scenes as Kya’s lawyer, Tom Milton. Big Atticus Finch energy. He takes it upon himself to come out of retirement to represent the Marsh Girl and really gives it his all, despite initial reluctance from Kya to open up about her side of the story.

From two romantic relationships – slow burn with Tate, and then a questionable connection with Chase (the eventual murder victim) – to a truly twisty murder mystery, gorgeous marshlands, and unbelievable illustrations of the wildlife and creatures of the marsh by Kya, there is so much to love about Where the Crawdads Sing. I recommend watching when it hits theaters next week, and will also be picking up the novel to see how the two compare – but I hope that book readers will enjoy the film as well, and look forward to hearing thoughts!

Where the Crawdads Sing hits theaters on July 13.