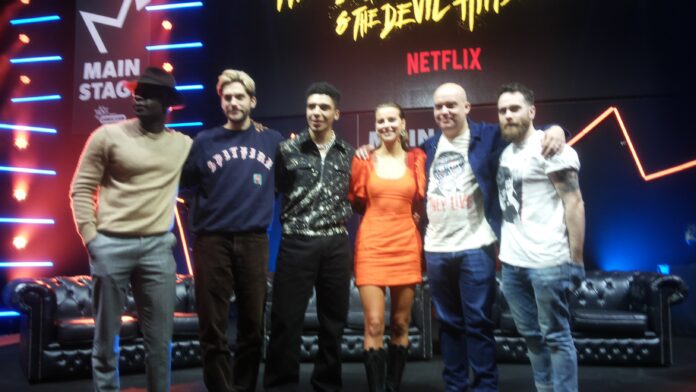 Hollywood News Source was at the pop-culture extravaganza in London during Halloween weekend in October to survey the exciting new shows, panels, celeb guests and cosplays from the thousands of fans in attendance from around the United Kingdom and around the world. There were displays from Dungeons and Dragons, Amazon Prime Video’s Lord of the Rings: Rings of Power TV series, Netflix’s The Bastard Son & the Devil Himself, Doctor Who, a Smallville reunion panel featuring the original cast, amongst other talks for fans to get excited about during Comic Con. There was a combination of programming from fantasy, adventure, sci-fi and horror genres.

They sat down to talk about behind the scenes of the fantasy adventure movie, which will be released in March 2023, also starring Chris Pine, Michelle Rodriguez, Rege’ Jean Page and Hugh Grant.

“A charming thief and a band of unlikely adventurers undertake an epic heist to retrieve a lost relic, but things go dangerously awry when they run afoul of the wrong people. Dungeons & Dragons: Honor Among Thieves brings the rich world and playful spirit of the legendary roleplaying game to the big screen in a hilarious and action-packed adventure.”