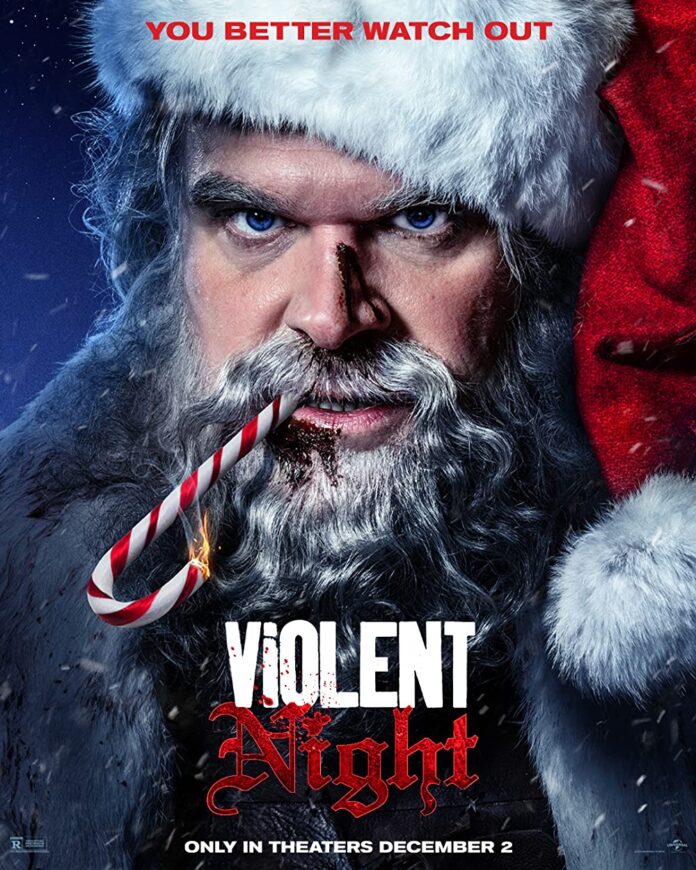 “Violent Night” is a Christmas film that is destined to develop a following during the holiday season. But that crowd will be the ones who enjoy violent action comedies with a holiday spin.

The story sees a beer-soaked Santa Claus, disgruntled with the lack of Christmas spirit. He is debating giving up his efforts once and for all. But when a group of criminals invade a home he is visiting, Santa vows to defend the family and save Christmas.

Movies like “Violent Night” often succeed because they know exactly what they are. It moves as a “Die Hard” meets “Home Alone” mashup.

The story offers some surprising insights that are timely to the current state of Christmas. I enjoyed seeing Santa reflect on how generational perceptions of the holiday have changed. Greediness, ungrateful children, and materialism run rampant, discouraging his good nature.

David Harbour captures this sentiment nicely and fully commits to the absurdity of this Santa interpretation. Some of the action and violence shines, as well. There were some spotty CGI blood/gore sequences, but the third act cleans it up nicely and proves Santa can kick some real ass when he needs to!

I did enjoy hearing why some of the invaders hated Christmas so much. It further added to the reason why Santa is dismayed with the evolution of Christmas.

While I can appreciate “Violent Night” for what it is, the over-the-top style isn’t exactly my cup of tea. Movies that mix absurdity, comedy, action and drama often feel a bit overstuffed. That’s the case here. There is a certain audience that will eat this up and make it a yearly rewatch during the Christmas season. I’m just not in that audience. It’s a fun one-time watch that shuffles up the standard holiday playlist.

The story had a promising start, introducing some good characters against villains with logical motivations. But the story abandons these characters for a Santa who seems to go against some of his own morals. The rest of the family gets very little screen time or further exploration after the opening twenty minutes. This is disappointing because I wanted to see more of their story unfold.

The film eventually descends into a violent romp where it becomes “Santa kill bad guys because…aaargh”. I was hoping the story would continue with the thoughtful ideas presented, but it devolves into a brainless action extravaganza by the third act. Not totally a misfire, but certainly disappointing after a strong start.

“Violent Night” succeeds where it needs to. It doesn’t pretend to reinvent the wheel or be anything larger. It could have been truly great if it didn’t abandon its thoughtful holiday exploration to watch Santa hack down bad guys.

Again, it has some fun moments and redeeming qualities. I just wish it continued with the strong momentum developed in the first act.