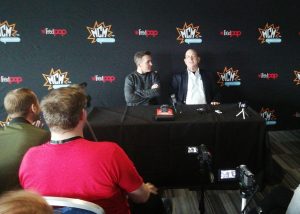 The two voice acting legends who clearly get along sat down with the press to talk about their careers and tell a few stories. If you don’t recognise Nolan North from his role on Pretty Little Liars you’ll likely have heard his voice on TV shows like Voltron, Guardian of the Galaxy the series as well as video games like Star Wars: The Old Republic, Uncharted and Destiny 2.

Richard McGonagle is known for his roles on Rules of Engagement, 500 Days of Summer and video game roles that include the Uncharted series, Disney Infinity and Playstation All-Stars Battle Royale

Here is the interview:

Catch up with all our convention, premieres and red carpet coverage on YouTube.