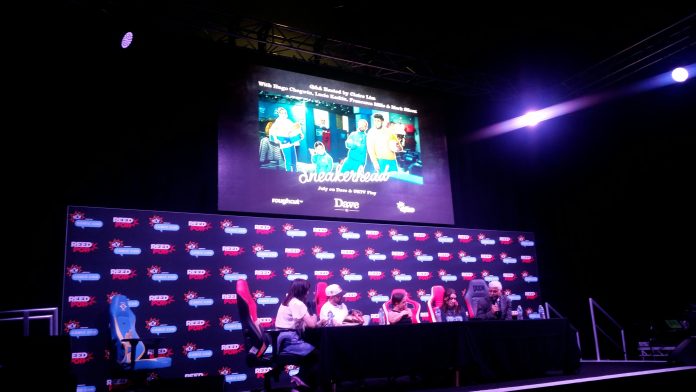 MCM Comic Con London came back for it’s first pre-Summer weekend on May 27-29, 2022 and was only the second event post-pandemic. Always colourful with its varied cosplayers, fans, artists and creators upon tens of thousands of people.

We had the opportunity to be at the Sneakerhead panel about the British satire show which will be released on UKTV’s award-winning comedy entertainment channel Dave this summer in July.

“Sneakerhead is a brand-new exciting comedy for Dave, you don’t want to miss it! Starring Hugo Chegwin (People Just Do Nothing) as Russell, the conflict-averse, newly appointed manager of discount sportswear store, Sports Depot (Peterborough Branch).”

Guests at this year’s MCM Comic Con in London included Robert Sheehan, star of Netflix’s The Umbrella Academy and Misfits and Dan Fogler, a Tony winner and star of the Fantastic Beasts franchise. We also had Paramount + at Comic Con preparing and showing a sneak peek of their massive video game adaption into a TV series of Halo, for their own streaming service which launched on June 22nd. There was a whole array of various cosplayers representing a diverse range of fandoms. Disney hosted a Lightyear panel, where the creators spent time discussing the behind the scenes of the film and the technical aspects. They also showcased an Avengers Assemble panel update and other news for Disney.