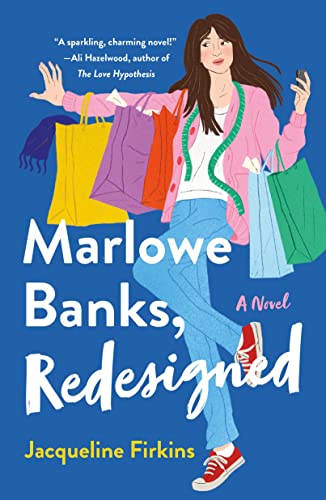 As I’m typing this, I am embarrassed to admit I have not read a book in over a year. However, after finishing “Marlowe Banks, Redesigned,” I am excited to fall into the escape of books once again. It was the perfect book to spend my nights reading. It was fun, emotional and sweet.

Let’s talk the main character of this book: Marlowe Banks. Marlowe is in her mid-20’s, and she’s figuring out her life. This is very realistic for a woman her age — we’re all just trying to figure out who we are and what and who we love. Her feelings regarding her ex, as well as Angus, were very real. She wears her heart on her sleeve, which is a good thing and remains open to love.

Marlowe is also very driven and determined — all great aspects of a main character. Although she didn’t exactly know what she wanted in the beginning of the book, she sure did at the end of it. The character development was well done in this aspect because everyone goes through hurdles and confusion in real life, whether it be career, friendships or romantic relationships.

Angus, our main love interest, was more complex than I originally thought. He started out as the “bad boy, attractive af” character who you just wanted to roll your eyes at. I thought he was going to be this Hollywood type who was all about himself. However, he was more than meets the eye. In reality, he was misunderstood and an actual caring, kind man. He didn’t love all the attention and the way everyone thought he was someone else. Who would?

Cherry was also a fun character. We all need a friend like her in our lives. While she was a little pushy, it came from a place of love and care. She was totally right about Marlowe’s ex — he did suck! Cherry had the perfect amount of sass to her character.

Though she’s not an actual villain, Babs was the villain of the book. She was not nice to Marlowe, stemming from a place of jealousy and unpleasantness in general. However, we did get very small glimpses of a heart. Still not my favorite character.

Who wouldn’t want to work on their favorite TV show? I know I have dreamed of that before. But not only does Marlowe work on a TV set, which isn’t a glamorous job and one she didn’t want to have forever, she also falls in love with the star of the show. She was really living the dream in that aspect.

The plot was fast-paced and a good time. It followed Marlowe on her adventures to finding out, no, she didn’t love running around LA all day doing tedious errands for Babs, and no, she didn’t love babysitting her dog either. However, those adventures often led to her adventures with Angus or his friends. I am a huge sucker for a book being set in the world of Hollywood. Also, I liked that the world of the book was centered around costuming and fashion — I love fashion and my mom is a costume designer, too, so it was fun.

On the surface, this book is fun, but it explores so much more. For example, Marlowe fleeing NYC because she ended her engagement; deeming herself not good enough for costuming after some bad press; living in a dingy apartment almost away from the rest of the world. Her life wasn’t glamorous, but I’m glad the author didn’t make it glamourous. Because, sometimes, you have to struggle before finding your happily ever after.

This was a slow-burn, which I used to not like in books, but I don’t know, maybe I’ve grown up because I appreciate a slow-burn now. Sometimes it’s needed to raise the tension, and there was tension between Marlowe and Angus!

It wasn’t love at first sight for the two. There were some misjudgments, nervousness over being integrated into Angus’s world of press and social media, but the obstacles made it more interesting to follow. Not every relationship will be perfect, though we wish they were. In the end, they were able to put aside their hesitancies that I believe came from both of their character developments.

Overall, this was a quick, fun read that I would definitely recommend. It certainly helped me get out of my year-plus-hiatus from reading. I look forward to any other books Firkins will write!