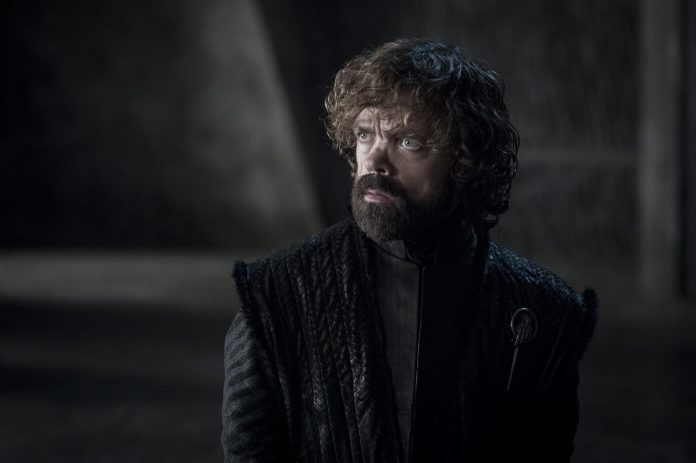 What follows is a recap of the latest episode of Game of Thrones! Stop here if you are avoiding episode five spoilers! The penultimate episode opens at Dragonstone, where Varys is furiously working to spread the word of Jon’s true identity. Daenerys seems to be mad with grief – refusing to take meals and certain that everyone is conspiring against her. Tyrion comes to her to reveal Varys’ treason. She is displeased with him and Jon for their part in the rumors. Varys shows no remorse and Daenerys executes him with dragon fire. Jon and Tyrion look on with uncertainty – seeming to wonder if they’re making the right choice in trusting the queen. (See, boys? This is what happens when no one listens to Sansa AGAIN!)

Daenerys talks to Jon after the execution – he says he loves her and continues to pledge his devotion. But when she tries to kiss him, he pulls away. She concludes that no one in this land really loves her – so she must rule with fear.

The dragon queen announces her plan to take King’s Landing. Grey Worm is ready for the city to burn – still mourning Missandei. Tyrion begs the queen to at least allow the innocent people to leave King’s Landing once the bells ring to surrender the city. Daenerys makes no promises but tells Tyrion that his brother was captured on the road to King’s Landing, and assures her hand that his next mistake will be his last. The troops camp outside the King’s Landing the night before the attack. Tyrion asks Davos for an undisclosed smuggling favor – which is perhaps how he obtains the key to release Jaime. Tyrion still wants his brother to reason with their sister, but Jaime knows this is hopeless. (And seriously – stop trying to make compromise happen, Tyrion. It’s not going to happen.) In exchange for his release, Jaime instead promises to take Cersei and flee from the city.

The next morning, the troops on both sides are ready and waiting for orders. Daenerys approaches the Iron Fleet from behind, swooping in and out of the sun, destroying the ships and their “scorpions” – the name they’ve given the weapons meant to kill her final dragon. She then destroys every scorpion placed along the perimeter of the castle and the burns the soldiers from the Golden Fleet who stand in formation outside the castle gates. This is her signal to Grey Worm to lead the troops on a siege of the city. Amid the chaos, Jaime enters the city alone – heading for the Red Keep to find Cersei. The Hound and Arya are also in the crowd that is pushing and shoving in search of shelter. They both have revenge on their minds.

The troops in the city are quickly ready to surrender. After the bells ring, Daenerys takes a moment to calculate her next plan. She seems to remember that Cersei is relying on her to show mercy, and decides instead to continue her relentless attack on every living person in the city. Grey Worm takes this as another signal and continues the ambush against the Lannister army that has already laid down their weapons. Jon is astounded and horrified by these actions, and attempts to command his men to stand down – but they follow Grey Worm into the fray. Jon attempts to save as many innocent people from the attacking troops as he can, but most are slaughtered. Daenerys continues to burn everything, with no regard for those on the ground. Green Wildfire flames are spotted popping up. The city fires will not be extinguished any time soon.

As the Red Keep begins to crumble, Cersei at first seems unfazed – but is eventually frightened and follows Qyburn to seek shelter elsewhere. Qyburn and The Mountain escort her. Meanwhile, The Hound is on their trail, closing in on the battle with his brother that has brought him all this way. But as he and Arya get closer and take note of the deteriorating structures around them, The Hound convinces Arya that Cersei will die before the day is done – and that the young warrior should go live her life instead of continuing on her path of vengeance. She takes his words to heart, giving him a sincere thanks as she changes course and heads out of the castle. As Arya makes her way through the city, she tries to rescue as many as she can. She knows everyone must get outside the perimeter walls if they hope to survive. In another area, Jon continues with the same goal – shouting to his troops to pull back and head toward the gates. They finally listen and follow him – now fearing for their own lives.

Jaime’s plans to reach Cersei are thwarted by guards and crowds, so he tries to get to her by way of the beach. There, he meets Euron, who has survived the attack on his fleet after swimming to shore. The two men battle, and Euron severely wounds Jaime but Jaime ultimately kills the Greyjoy man before continuing his search for his sister.

The Clegane Bowl begins when The Hound spots his undead brother with Qyburn and Queen Cersei. The Hound kills four soldiers as he makes his way toward The Mountain. Cersei orders her guard to stay with her, but he refuses. He can’t resist the fight. The Mountain quickly kills Qyburn when the hand of the queen tries to stand in his way. Cersei escapes alone, and neither brother seems to notice or care.

Here, the scene jumps between the brothers’ battle and Arya’s attempt to flee the city. She is trampled by a crowd, knocked out by flying debris, and almost burned to death by Drogon’s fire. The Hound gets several good shots in on his brother, but the undead Mountain won’t seem to die again. The giant man attempts his signature move of blinding The Hound and crushing his skull, but the younger Clegane finally gets a knife through his brother’s head. With only one eye working, he lunges again and both men topple out of the Red Keep and into the fires below.

Jaime finally locates Cersei, but they both seem to know all is lost. Cersei is terrified, but lights up when she seems him. He takes her further below the castle, where Tyrion has instructed him to escape – but their exit is blocked by rubble. Cersei says she wants their baby to live – and Jaime holds her and reminds her that nothing matters but the two of them. Then the walls come crashing down, and just like that – it seems the Lannister twins are no more.

Continuing her escape, Arya attempts to save a mother and daughter – recognizing the mother as the woman who saved her earlier from being trampled. Instead, the two are burned to death by Daenerys’ relentless attacks, but Arya eventually escapes on a white horse that is out of place among the ruins of the city.

With only one episode remaining, it seems that Daenerys has officially become the Mad Queen. Now, it will be up to Jon, Arya, and Tyrion to try to prevent her from sitting on The Iron Throne. The only question is – who will do it and will they get burned in the process? Whatever happens – if this episode was any indicator, we know the next one will be straight fire.