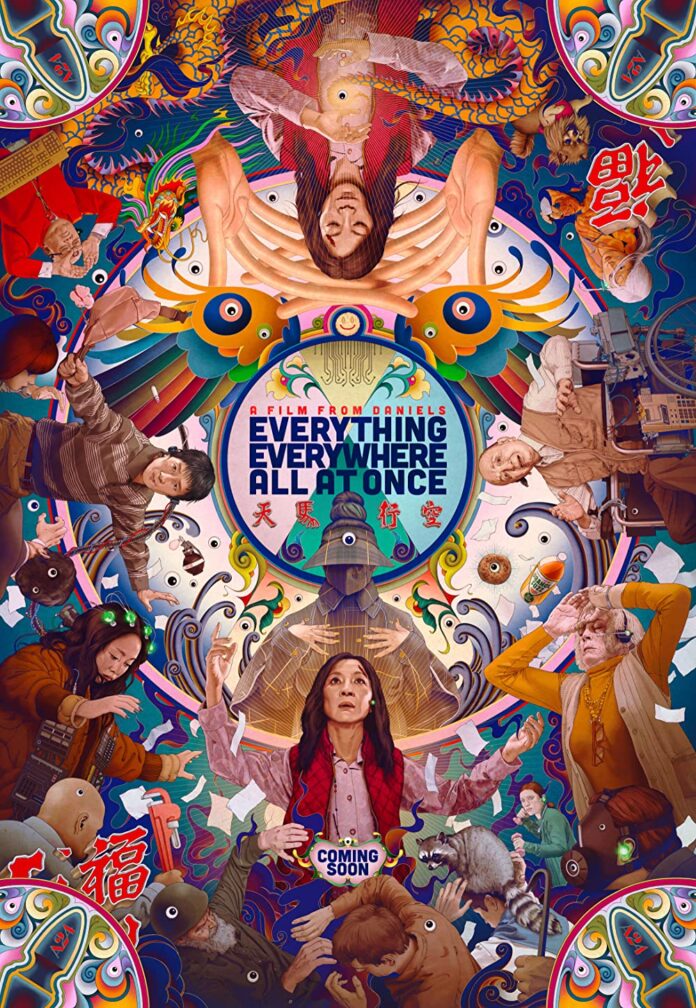 “Everything Everywhere All At Once” Rating: 3/5

This seemed to have been the sleeper hit of 2022. I was very curious to check it out with all the commotion going on.

With an abundance of multiverse films coming out nowadays, “Everything Everywhere All At Once” explores the concept in a different setting. The story explores the life of Evelyn Wang, an aging Chinese woman who struggles to keep her life together. She is thrust into an intense exploration of other universes that give perspective on the lives she could have led. She must explore each timeline in order to save the lives of those around her.

The story opens quickly with some heavy exposition surrounding Evelyn’s life. I appreciate this because it avoids the slog and pretentiousness that surround films like these.

Certain moments in the first act are unexpectedly funny and clever, making Evelyn and her family people you’d like to know more about. While Michelle Yeoh is getting most of the publicity, the standout performance is from Ke Huy Quan. He was phenomenal and (for me) is the backbone of this story.

I also appreciate the exploration of Evelyn’s internal battles throughout each universe she visits. It gives perspective in the aspects of her life she wishes went differently. Most viewers will be able to relate to these ideas and gather some perspective within their own lives. It’s always nice to back up and think about what is important.

While there’s a lot to admire, there are some elements that don’t come together. I’d say I appreciate the movie more than I enjoy it.

Multiverse films dealing with time travel usually aren’t my cup of tea. I feel as though they get swooped up in stylish flare and the larger ideas that they often forget the personal moments that make these journeys special. Same deal here. The film is over the top, bonkers and absolutely bombastic at times. Some will really enjoy this perspective, but others will loathe it. I feel as though most mainstream audiences won’t gravitate towards this story and will likely prefer a more straightforward approach.

Instead of jumping around at a breakneck pace, a more intimate exploration of Evelyn’s different lives would have been more effective. I also found some of the special effects to be underwhelming. They give the film a low budget feel at times.

Overall, “Everything Everywhere All At Once” is what I expected it to be. A film that will find the niche crowd it seeks but won’t be for all audiences.

I certainly appreciate the craft and unique exploration of Evelyn’s life, but its all a bit too much. Check it out if you think a wonky multiverse film might be up your alley.

Catch up with more reviews and exclusive interviews on Hollywood News Source here.