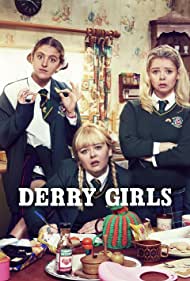 It’s cold, it’s dreary. Nothing cures the winter blues quite like a funny show. For me, that was the Irish comedy, “Derry Girls.”

While picking something new to watch amongst all the content currently streaming, I look for something that will entertain me but also keep me wanting more. I had been eyeing “Derry Girls” for a while now, but I never made the move to watch it. Having just finished the series, I am so glad I did, but so sad it’s over!

Here are four reasons “Derry Girls” needs to be on your Netflix queue:

The thing you should know about me is that I am easily entertained by TV. However, there aren’t many shows where I laugh out loud. “Derry Girls” had so many laugh out loud moments that I can’t help but want to meet the writers. I feel like that’d be a good time!

The antics the girls (and James) get up to are super unrealistic, but nonetheless, hysterical. It’s ridiculous, really. It’s not even just the dialogue that is funny but the physical comedy, too. Erin, Sister Michael, Orla are all great at their physical comedy, whether it be their facial expressions or some weird movement/flailing they’re doing in a scene.

We can’t forget the grandfather’s absolute disgust over his daughter’s husband, or Orla’s step aerobics that will take her to the next level, or Sarah’s utter appreciation for a woman’s eyebrows. Each character has their own quirks and storyline that will have you laughing at and with them.

A Focus on Friendships

Oftentimes, TV shows like to find a central romance and make it the focal point of the show. Listen, I like romance and shipping TV characters like any other person, but it’s nice that romance and couples take the back burner in “Derry Girls.” Not to say the show was devoid of any of this.

Sure, Michelle was super thirsty for male companionship. However, it wasn’t the whole plot line of the show. “Derry Girls” focused on friendship between five girls (well, four plus, James, but he did go to an all girls school and got clumped into the group. They often group him as being one of the girls, despite his insistence that he was a boy). They fought, they laughed and cried together and they stuck by one another’s side. Even when things got bad, which more than not, they did!

There were moments that were so sweet to see them support each other, such as Claire’s coming out and when her father passed. They were all there for her. Or when the girls at school were making fun of Orla’s talent show step aerobics routine, and the girls all stood up for her. We love to see girl friendships that don’t turn on one another or fight over boys.

A Glimpse Into History

This show brought us back to the 90s in Ireland. I don’t know much about the history of Ireland, but this show does explore some of its history. In Derry, where the story is told, it was during a time of conflict in Northern Ireland. Some scenes showed the girls and family walking or driving past guards to gain admittance onto their own roads.

It was a history that was unknown to me. By the end of the series, we see the girls voting to put an end to the conflict. So, not only was the show funny, but I learned something new.

A Fun Cast of Characters

I loved every single character. Every. Single. One. There wasn’t one character that I disliked, which if you know me, I always find one character to hate on. Each character brought their own personality traits — this helped give the show an edge because every character was so different from the next.

Hands down, Sarah was my favorite character. When you think of a quirky aunt, Sarah is what comes to mind. She was so weird and oblivious and quirky. All traits that made me like her — she made me laugh the most.

The main set of characters, Michelle, Erin, Claire, James and Orla each had their own flare. They were a group of girls I would have hung around in high school. I can’t forget Sister Michaels who was the most sassy, edgy nun ever. Seriously, that woman was hilarious.

Wait…I did dislike one character: Jenny Joyce, but I think that was the point.

I can’t say enough good things about this show. It’s definitely going to be one I will rewatch and one where I will force all my friends to watch it. I should note, it’s only three seasons with less than 10 episodes per season. Savor it!