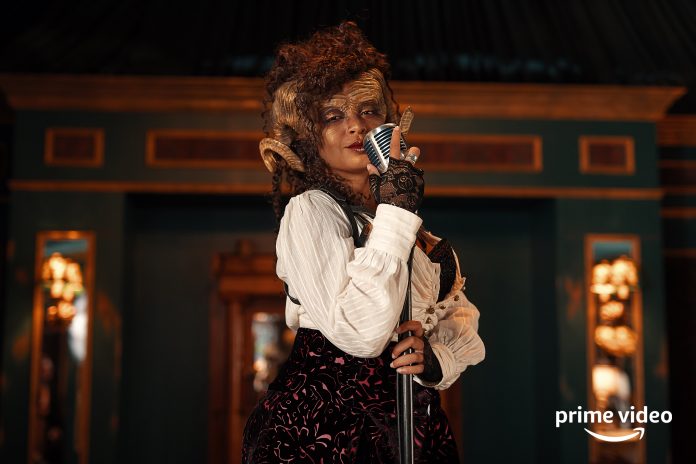 Bringing three buzz-worthy (if not already beloved) series to life, Amazon Prime Video’s off-site activation at this year’s San Diego Comic-Con was undeniably one of the hottest spots at the convention. Fans had the chance to step into the worlds of Carnival Row, The Boys, and The Expanse in unique, immersive experiences; catch sneak peeks on the giant, 40-foot LED tower in the center of the activation; enjoy the cosplay photo station and other fun photo ops; and more.

The Prime Video experience was so popular (even during the press preview) that we only got to experience one of the three incredible show activations – the one for upcoming series Carnival Row, a neo-Victorian story with elements of fantasy, murder mystery, and timely immigration issues that stars Orlando Bloom and Cara Delevingne.

The experience was certainly worth the wait, as we got to travel into the Burgue – a Victorian city where humans and mythical creatures fleeing their war-torn homeland live in an uneasy coexistence. The creatures are viewed as second-class citizens by the humans – threats to their livelihoods and far from entitled to live in the Burgue, as far as they are concerned. The prejudice and stark differences in treatment were clear from our first steps into the experience, where “creatures” and humans lined up separately for what resembled an immigration checkpoint. The officers manning the station were perfectly lovely to me in the human line but sneered and snapped at the creatures. (Just a little metaphorically relevant to the current political climate, maybe?) Once past the checkpoint, we emerged into a small marketplace staffed by two fauns. (The makeup? Incredible.) The performers pulled individuals aside, pulling pranks on humans and whispering news and secrets to creatures. From there, we were hustled through a secret door into the Forbidden Lounge – seemingly a burlesque club with mythical performers. From fairy dancers to a variety of creatures who spoke out about the discrimination and warned of a danger stalking the shadows, let’s just say that there was a lot going on in this gorgeous, mysterious venue. At the other experiences within the activation, fans also got to take part in covering up the crime scene of a superhero kidnapping at the A/V shop where Hughie works in The Boys, and traveled along on a UN peacekeeping mission to a newly colonized planet seen in The Expanse. There was so much to explore and excite, leaving us intrigued and excited for Carnival Row and Prime Video’s other upcoming offerings.

Carnival Row premieres August 30, The Boys is available now, and The Expanse Season 4 premieres on December 13 – all on Amazon Prime Video.