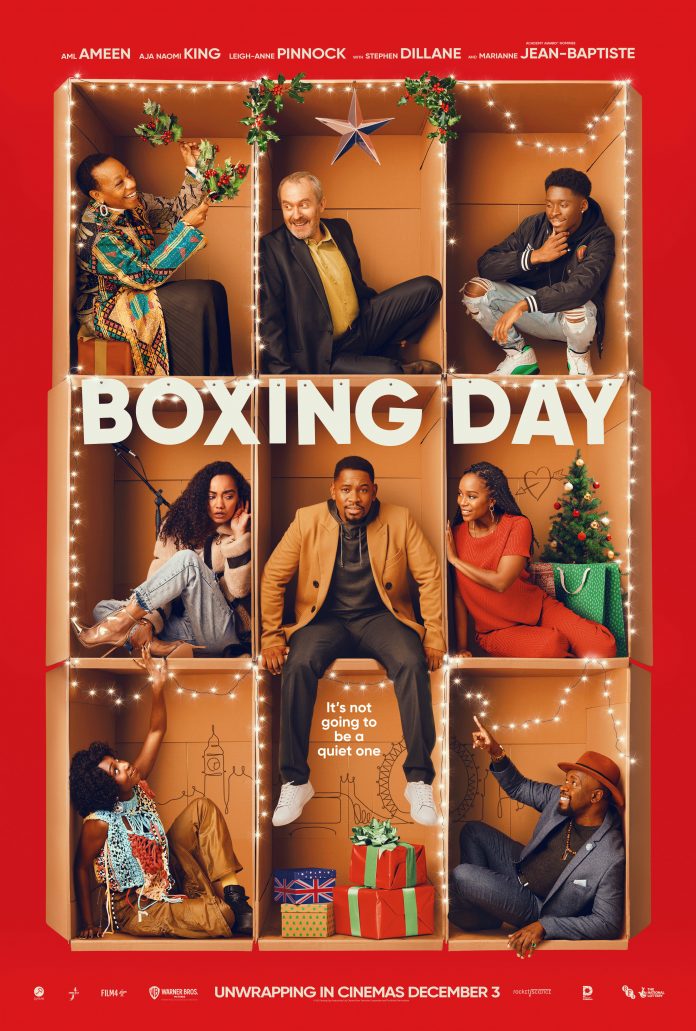 From Warner Bros. comes this British romantic comedy from Aml Ameen who starred in, wrote, directed and produced this first feature film from him. Based on his own life journey and experience during the British holiday of Boxing Day, it also features a very experienced British ensemble black cast. I am usually apprehensive in regards to modern rom-coms, but this was genuinely fun for a Christmas movie. It tells the story of a successful writer reconnecting with his family and the comedic mayhem that it causes during Christmas when he returns to London with his new girlfriend Aja Naomi King (Lisa) from the U.S and how she interacts with his Mum (Marianne Jean-Baptiste) and his ex-girlfriend (Leigh Anne Pinnock, from the pop group Little Mix) and the rest of his eccentric but enthusiastic family and friends. The music of the film perfectly captured the atmosphere and Afro-Caribbean essence of community, culture and family in London. Leigh Pinnock performed some of the music herself for the film, while Melvin (Aml Mameen) finds himself in the middle of everything while also dealing with his own unresolved family issues.

A family reunion at Christmas, what could go wrong?

Melvin, a British author living in America, returns home to London for the holidays to introduce his American fiancé (Lisa) to his eccentric British-Caribbean family. Their relationship is put to the test, as she discovers the world Melvin left behind revolves around his ex-girlfriend (Georgia), who is now an international pop star!

During a Q&A panel at a screening of the film, Aml Ameen talked about the process and journey of getting the film made. Amongst other parts of the film, he mentioned the importance of music in film from Reggae, UK grime and Hip Hop (below).

“Music is ahead of film in this country, it always is, I think around the world music was ahead. Music is like a complete shot to the bloodstream, where you are watching a film you take it in slow, we grew up on music that kind of told stories before we could ever get behind the camera and shoot, so it is just natural in influence. Whether everybody does that or not I don’t know, I think there is a lot of filmmakers coming out that have a real particular taste on things, It Just happens that myself and Jeymes (Samuel) are symbiotic in that way.”

Boxing Day is now available to rent on Premium Video on Demand.

Images are copyright of the respective owners.