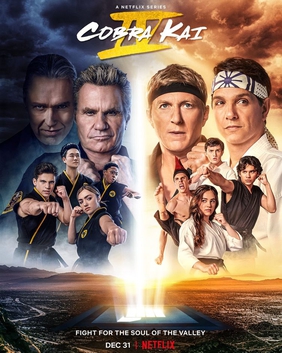 When it comes to the world of martial arts, balance and honour has always been key. Whether it is the sun and the moon, night and day, ying and yang, good vs. evil, war and peace etc., when it comes to the the universes of The Karate Kid and Cobra Kai, it couldn’t be more true for this Emmy-Nominated series. After the explosive events of Season 3 and Robby Keene and Hawk swapping sides, the lines of battle had well and truly been drawn. Johnny and Daniel had agreed to join forces with their students from Eagle Fang and Myiagi Do Karate respectively, and with John Kreese feeling the strain of this alliance, he calls in an old friend in the form of the of his slithery, manipulative old army buddy and fellow Cobra Kai Sensei Terry Silver. The role is played menacingly and with charismatic allure by Thomas Ian Griffith (Karate Kid 3) who has not been seen for over 30 years. We are introduced to new characters like Kenny and Devon and familiar ones like Demetri. Some will fight for family, some for legacy, some for respect, and others just to be champion and for honour. One of the really cool parts in Season 4 is that Cobra Kai embraces its history, connection, and similar mythology to the Rocky films with the characters and the connection to Karate Kid and Creed as I’ve mentioned in previous articles and is referenced in this season’s episodes.

Below is an intro to some of the young fighters competing at the Under 18 All Valley tournament this season with the stakes higher than ever before:

From bullied young student to the reigning and defending All Valley Under 18 champion returned for Season 4 with new purpose. Miguel (Xolo Mariduena) was Johnny Lawrence’s first student when he decided to bring back Cobra Kai. Johnny not only saw his skills improve rapidly to become his best student but also witnessed his great heart, compassion and empathy becoming a father figure for Miguel even after rehabbing from a back injury in his fall at the school fight in Season 2 against Johnny’s son Robby Keene. His combination of controlled speed, strength, agility, and stamina made him a formidable opponent under Johnny, and later on Sensei John Kreese. Now under the tutor-ledge of Daniel LaRusso, this would make him along with Hawk the most complete of fighters at the tournament. What makes Miguel special is that his moral compass never wavers, helping him to learn that life is far bigger than a tournament and title. The fact that Miguel was given Johnny’s original Cobra Kai Gi and Daniels Miyagi Do headband by them, speaks volumes for his heart, skills, and integrity.

MIGUEL – “There’s no honor in being merciless.“

The evolution of Samantha LaRusso (Mary Mouser) in Season 4 to the ‘Bonsai Bad-ass’ she becomes has been a long time coming. The legacy of Miyagi Do and the LaRusso name has at times been a burden for the young LaRusso, who’s had Karate in her blood. Taught as a young girl by her Dad, she had the natural technical ability already. As a young girl, she went away from the legacy but regained her passion for it with her recent battles with Tory and Cobra Kai. With teachings from Sensei’s Johnny Lawrence and her father Daniel Daniel LaRusso, she combines the defensive and offensive styles of Miyagi Do and Eagle Fang to become her best self, as she faces a collision course with her arch-rival Tory Nichols at the Under 18 All Valley Tournament.

SAMANTHA – “Everybody’s got a sob story. Doesn’t give you the right to be a bully.“

Fast, high-flying, aggressive, relentless, gifted but a flawed fighter. Witnessing what Hawk (Jacob Bertrand) has evolved to as the reserved Eli has been an amazing metamorphosis. His controlled rage makes him an impressive fighter. Being bullied and picked on fueled Eli to develop his far more confident, charismatic and ruthless alter ego known as ‘Hawk’ once he joined his best friend Miguel training under Johnny. Until he learns to find the perfect balance inside himself, he will not reach his full potential as a fighter and an individual. With the support of his friends like Miguel and Demetri, Hawk will have to conquer arguably his greatest enemy this season – himself.

HAWK – “Lemme let you in on a little secret – it’s not just the haircut or the back tattoo… it’s a way of life, man! You just gotta feel the energy, just live in the moment!“

The fiery, athletic “Queen Cobra” herself Tory Nichols (Peyton List) has carried a chip on her shoulder, or I’d say both shoulders, since arriving in Season 2 as the fearless but obviously talented martial arts novice she was then. She has had to fight for everything she has and carries a fury and attitude which makes her formidable but stubborn, and even more vengeful after the incidents in Seasons 2 and 3 which had her expelled from school. These incidents have ended up leading her to clash with various characters such as her arch nemesis Samantha LaRusso, the girlfriend of Miguel Diaz. Tory has to help provide for her family as well as go to school. She has always been a fighter and now she wants to prove she can be a champion too.

TORY – “The world shows no mercy. So why should we? Some people have it good, but the rest of us, we have to fight for every inch of what’s ours. Not just to score a point – for everything.“