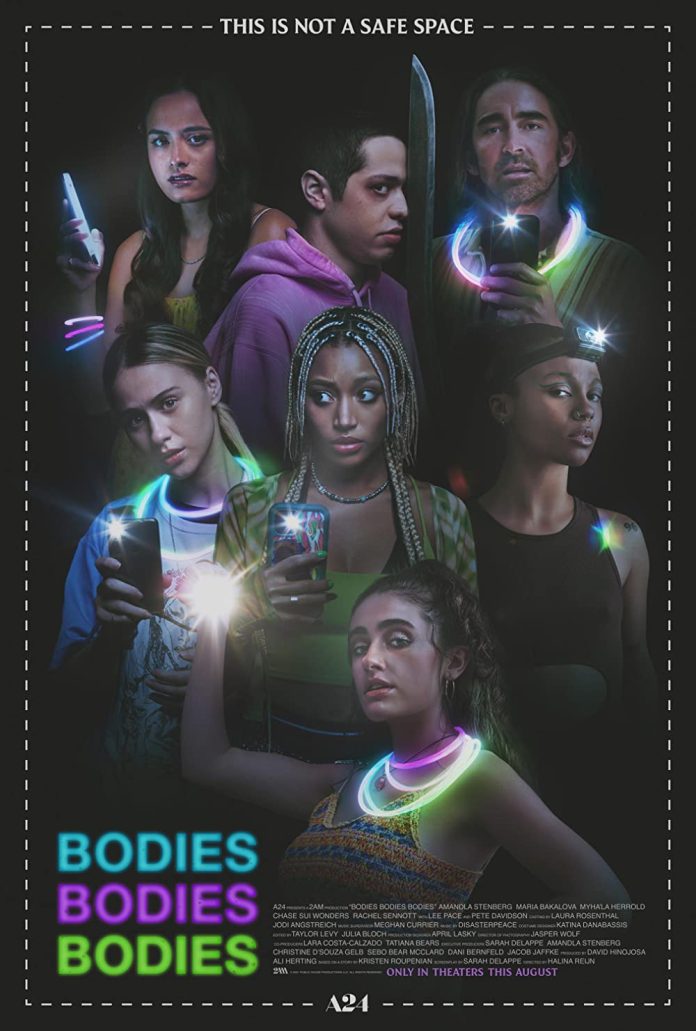 After a critically and commercially successful year for A24, it looks like they have another hit on their hands. “Bodies Bodies Bodies” follows a group of young, wealthy adults who decide to have a “hurricane party.” The group decides to play a party game that unfolds as a deadly massacre throughout the night. Can the individuals stay alive? Or will their mistrust in one another get the best of them?

Although A24 has been strong in 2022, I can’t help but feel like none of their films have connected with me. After seeing this film, I can confidently say that has changed. From beginning to end, there is a consistent display of unrest among the group. There are clearly unresolved issues among each of the group members, which escalates as the film goes on.

Keeping the members within the confines of the house in the middle of a hurricane also adds to the claustrophobic feeling. It continues to build and build throughout the story. Very well done. I’ll admit that I’m a tough person to please with satire, especially within a horror/comedy mix. However, director Halina Reijn manages to toe the line very nicely.

A scene that begins funny quickly switches to a tense, unsettling vibe. Each cast member gives a good performance, too. I wouldn’t say one in particular stands out — yet each manages to contribute their piece of the toxic environment being displayed. This is vital to the film’s success, which leads to my favorite part of the film: the social commentary on Gen Z.

Being a member of Gen Z myself, I find this quite clever. The film highlights how social media contributes to a group dynamic where gossip, mistrust, backstabbing and self-importance runs rampant. It is even crazier how the group members behave in person. Each uses modern social media terminology in abrupt seriousness — referencing their phones in situations where the film should require a sense of seriousness.

At times, I felt like I wanted to laugh but also feel disgusted. But in the best way! The toxic way the group members treat each other might make for an unpleasant experience for some, but I find it to be effective (if embarrassing) commentary on the current generation. But hey, we all have to laugh at ourselves once in a while, right?

The ending has been a topic of controversy as well. I happen to fall on the positive side of the argument. I love it. The film manages to defy expectations, while still surprising me right up until the very last frame. It makes the overarching themes of the film far more effective.

There aren’t many aspects of the film that really bother me. I did notice a few sequences where the camera work is shaky and unfocused. It seems like the filmmakers did this on purpose to enhance each sequence. This is a good idea in theory, but it isn’t as pleasant as a viewer.

The third act is a bit drawn out. I feel as if the final sequence could have been tightened up to make the climax more effective. I suppose the unlikability of the characters could make it difficult to sympathize with them. I personally think this is a good thing for the overall message of the story.

Overall, “Bodies Bodies Bodies” managed to impress me with some potent social commentary while managing to balance the horror/comedy tone very nicely. I recommend it to those who might enjoy some self-examination or an offbeat slasher. But I could also see some that wouldn’t care for it at all. It’s a very unique filmgoing experience that I won’t soon forget, so this one gets a hefty recommendation from me!