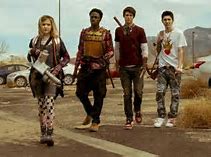 On behalf of Hollywood News Source, I was thrilled to be able to interview the cast of NETFLIX’s new series, “Daybreak” at New York Comic Con this year.  The show is one I have been eagerly awaiting as it seemed to check off many of my interests as a post-apocalyptical zombie thrill ride with previously-overlooked heroes disentangling themselves from high school cliques to save what is left of their world.  After meeting with the cast and sharing just a bit of the joy and enthusiasm they have for their story, I am now more excited than ever for the show to start on the Oct 24th.  I want you to be too!  So without further ado, I present you with my “10 Reasons Why I am Excited for NETFLIX’s “Daybreak!” Watch it on NETFLIX beginning Oct 24.