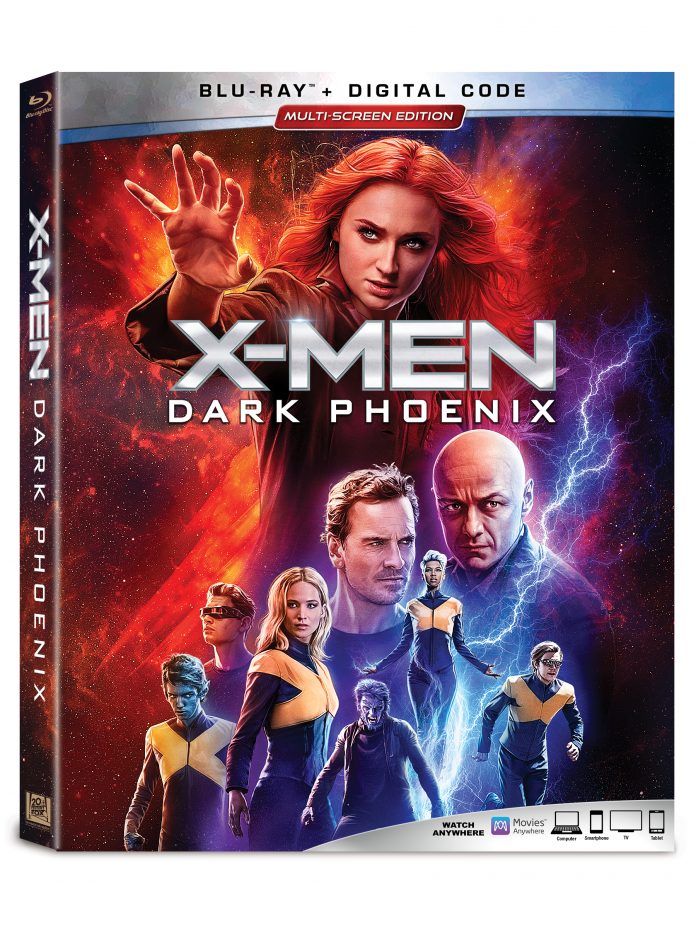 20th Century Fox was kind enough to send us a review copy for the home release of X-Men: Dark Phoenix. Check out our review of the product below! Sophie Turner, James McAvoy, Michael Fassbender and Jennifer Lawrence fire up an all-star cast in this spectacular culmination of the X-Men saga! During a rescue mission in space, Jean Grey (Turner) is transformed into the infinitely powerful and dangerous DARK PHOENIX. As Jean spirals out of control, the X-Men must unite to face their most devastating enemy yet — one of their own.

The home entertainment release comes packed with hours of extensive special features and behind-the-scenes insights from Simon Kinberg and Hutch Parker delving into everything it took to bring
X-MEN: DARK PHOENIX to the big screen. Beast also offers a hilarious, but important, one-on-one “How to Fly Your Jet to Space” lesson in the Special Features section. Check out a clip of the top-notch class session below!

Add X-MEN: DARK PHOENIX to your digital collection on Movies Anywhere September 3 and buy it on 4K Ultra HDTM, Blu-rayTM and DVD September 17.

*Commentary available on Blu-ray, iTunes Extras and Movies Anywhere only

**Available on Digital only

It’s not a secret that the latest installment of the X-Men films didn’t receive rave reviews. But as a journalist, there are some times where I’ve felt that the collective “critics” get a film wrong. X-Men: Dark Phoenix is one of those times. I loved the film. I thought the film offered a more intimate look than we usually get of these iconic characters, and that the film was beautifully done. I won’t get too much into my review of the film itself, as I’ve already reviewed it during its release, so let’s dive into the Blu-ray itself. The product is very eye catching and offers a nice protective sleeve for the Blu-ray. Also included is a Digital Code, and I can’t stress enough how appreciated the digital code is. Now let’s breakdown (for me) what is the main appeal of buying Blu-rays or DVDs – the bonus features!! And this product does not disappoint! Here’s a little breakdown of each:

There are 6 deleted scenes total here. None were scenes that I felt strongly should have been included; most were cut for time and made sense to cut. But they were all fun little scenes to watch that just give a little more of a look inside the characters. I recommend watching with commentary – you get both options – because the creators can explain it far better than I can.

The first is a scene with more NASA and a little more footage of when the X-Men returned home from their rescue mission into space, there’s a fun moment with Quicksilver and a fan showcasing how much fame they all were generating, but ultimately it was cut to focus more on the main storyline.

The second scene shows more of Professor X’s worry when he can’t read Jean like usual. It features a brief interaction with Hank and the two going to Jean’s room to check on her.

Next up was a scene with the X-Men preparing to go meet Jean with Mystique telling Beast to put the weapon away – definitely a foreshadowing scene. Ultimately the creators felt it was too much foreshadowing, and thus it was cut. We also see a little more Jessica Chastain here.

A scene with Scott as he alerts Professor X that Hank’s not in class and has gone MIA. They then travel to the lab with a very betrayed Professor X. The shock really reads on his face, and James McAvoy, as usual, delivers a great performance.

Speaking of McAvoy, in another scene, we see Professor X going to a field talking and apologizing and saying goodbye to Mystique. James McAvoy gave a great performance here with so much emotion in his eyes. We then see him go around the empty hallways at home and get into a vehicle that he drives away – and it pans out all the way into the universe with voiceover by Jean. I almost wonder if this was an alternate ending that they didn’t choose to go with. But ultimately they wanted to show a united front between Professor X and Magneto and their brotherhood so this scene was scraped. Though it was beautifully done.

How to fly your jet to space with Beast:

Nicholas Hoult (and Beast) fans rejoice! This one’s for you. It’s 2 solid goofy, adorable minutes of Nicholas in full Beast costume talking about the jet and space travel. It’s complete with some jokes, interesting footwear, and surprising space snacks stored in the jet.

If you’re buying the Blu-ray, chances are this feature isn’t super necessary to watch, as it’s the three trailers that were released for the film before its release – the teaser trailer, full trailer, and final trailer.

Audio commentaries are so fun to watch. And this one is with creators Simon Kinberg & Hutch Parker. Although commentaries with actors are also fun, I actually prefer the ones with the filmmakers themselves. They tend to give a lot more tidbits that the actors can’t since filmmakers are much more involved behind the scenes.

Rise of the Phoenix: The Making of Dark Phoenix:

This feature is broken into several parts: Story & Pre-Production, The Cast, Production Design, Special Effects, and Filming & Editing. In total, it is an hour and 20 minutes long, and is definitely the feature that makes this product worth the purchase. You get so much from this feature, and the die-hard X-Men fans will love it. There’s a lot of behind the scenes footage and cast interviews with the whole cast. One thing that became really clear watching this is the passion Director Simon Kinberg had for the story and this story in particular. His #1 cheerleader who encouraged him along the way? Jennifer Lawrence! She has been telling him for years that he needs to get in the director’s chair. When this script came out, he finally agreed. Sophie Turner talks about it being a collaborative learning environment for them both as it was her first time as a lead in a major film. The two of them met beforehand and spoke about the significance of Jean and how much would be different from the first X-Men film she was in. The feature focuses on all characters, their arcs, and their journeys. It dives into the rationale behind their decisions and how the cast all bonded throughout the films. There was quite a bit about the emotional goodbye to Mystique/Raven/ Jennifer Lawrence to this franchise. We also got to see a lot of light shed on some of the characters we see less of – Storm/Alexandra Shipp and Quicksilver/Evan Peters, etc. We also get a look at concept art, special features, and props such as the infamous wheelchair. It’s a great feature with something for everyone.

Here are the technical specs for all the tech-inclined viewers.

Pick up your copy of X-Men: Dark Phoenix on Blu-ray, DVD, and Digital today!