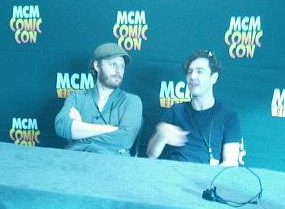 We have some more footage from our attendance at London MCM Comic Con this time a press panel with Rupert Young and Alexander Vlahos of BBC fantasy series Merlin. Merlin may well have been off our screens for five years but with Syfy re-airing the British fantasy series and the show coming to Netflix means a new generation will learn about the adventures of Merlin, Arthur and Camelot.

Rupert Young and Alexander Vlahos attended London MCM Comic Con to meet old fans and new in the three day event held at the Excel Centre London. Hollywood News Source was lucky enough to participate in their press panel where we learned about what happned behind the scenes, what wearing all that period costume is really like and what the two actors feel about Merlin.

The interruption to the interview was a cosplayer on a bridge looking for the perfect shot. No Batmans were harmed during the filming of this interview. 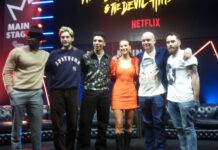