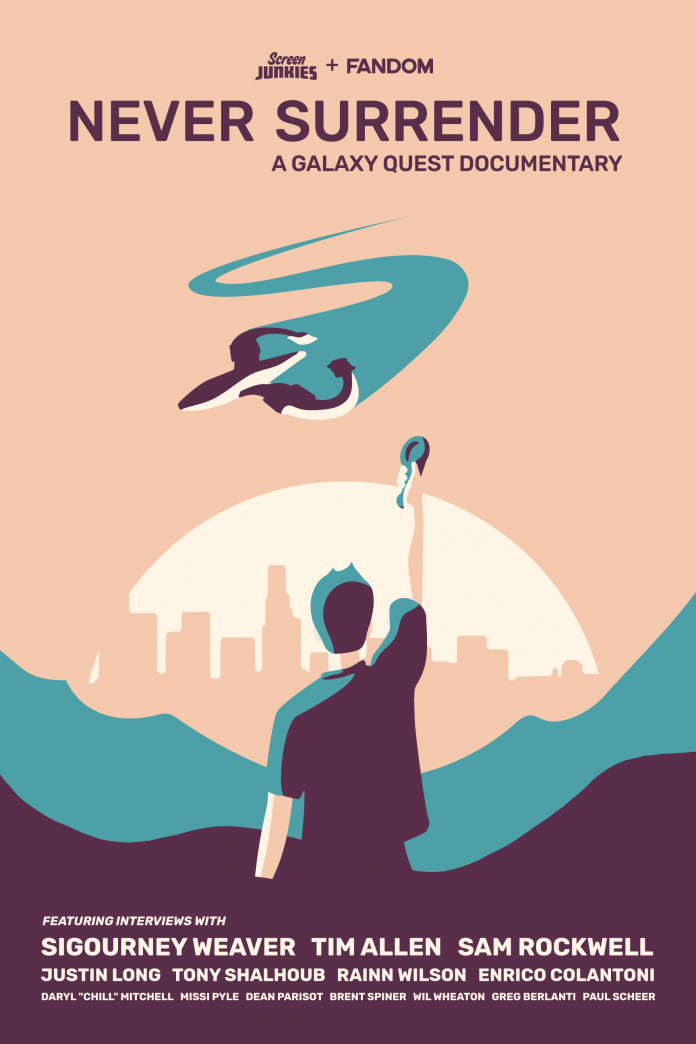 A long time ago, in a decade (that feels) far, far away before comic cons and cosplay were common, lived a tribe of Super Fans known as “Trekkies.”  These fans revered and reveled in a show called “Star Trek.”  The fans were unusual; they dressed like their favorite characters from the show and they organized and attended conventions where they could meet other fans and, when the stars aligned, actors from the show.  They were loyal and humble and often labeled as “weird.” They became so iconic that Saturday Night Live was able to convince William Shatner to do a skit about them… (the following is a brief commentary with portions of the skit, I was unable to find the full skit but you should keep looking for it because it is hilarious.  Sorry Trekkies.)

Then, in 1999, came a movie called “Galaxy Quest.”  The premise of Galaxy Quest was rooted in Star Trek and its fans, but it took the obsession one step further and asked, “What if Aliens were also watching the show and thought it was real? What if they needed the “crew” to help save their planet?”  Well, spoiler alert, I’ll tell you what happens:  Galaxy Quest is born, hilarity ensues, and a new fandom–based on a movie, based on a show– is welcomed into our weird world.

And now, we get to the review part of this review.

On Nov 26, Fandom will be releasing “Never Surrender: A Galaxy Quest Documentary.”   Those familiar with Galaxy Quest will know the documentary title is from the movie’s catch phrase, “Never give up, never surrender!” The documentary is intended to capture all the nonsense I mentioned above (and I say that with love) and can be described as a “love letter” to all the Galaxy Quest fans out there.  But really, I think it is fair to say that the message the documentary sends is good for us all because it reminds us that there is a place for “weird” in everyone’s life.  And by “everyone” I mean all the geeks and nerds and weirdos who cosplay and attend comic cons and stand in line for hours for photos, autographs and panels with the actors who play our beloved characters.  Yep, you and me.

The documentary features original cast members Tim Allen, Sigourney Weaver, Justin Long, and Sam Rockwell, as well as industry luminaries Damon Lindelof, Greg Berlanti, and Wil Wheaton.  Not in the documentary, but certainly discussed at length, was Alan Rickman, who sadly passed away in 2016 but was HILARIOUS in Galaxy Quest.  To say the cast of Galaxy Quest was a dream cast, would be accurate.

Never Surrender: A Galaxy Quest Documentary, takes us through the process of developing, casting, filming, editing and releasing the movie.  Within in the movie, we hear tidbits from the actors, writers and producers on topics like how classically-trained Rickman tolerated comedy-based Allen; about how the unique speaking pattern of the Aliens was created and about Weaver’s gravity-defying boobs.  It is a wonderfully entertaining journey that sounds like more fun for them to talk about now than it was to live through 20+ years ago (the drama!).  Woven through that is the fan experience; their interaction with the the original film and each other, as well as to various revelations presented in the documentary. The movie is fun.  Like, seriously fun.  It is also funny and human and insightful and occasionally feels like a joyous history lesson on how the world of cosplay and comic cons was created.  I encourage you all to go see it and Galaxy Quest. You will not be disappointed, I swear.  And remember: Never give up! Never Surrender!