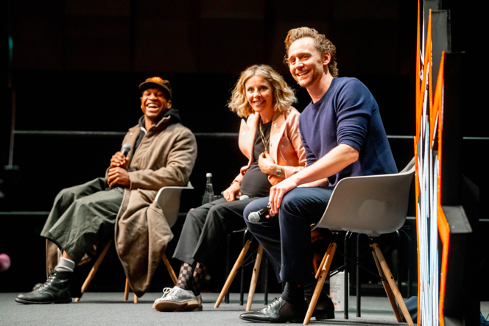 The ending of Loki season 1 would go on to have massive ramifications in regards to the MCU-(Marvel Cinematic Universe ) and its multiverse.

The fantasy/adventure show Shadow and Bone which created a passionate cult following from the books and also when it premiered on Netflix in April. Shadow and Bone fans were treated to a panel featuring stars Ben Barnes-(General Kirigan-left) and Freddy Carter-(Kaz Brekker-right)-(below)

The Hollywood News Source also had the opportunity to see many different cosplayers at MCM Comic Con 2021, below are some various images of some of the different fandoms that were represented.

Some of the other highlights included the Amazon Prime Original Series-Wheel of Time, showing teasers and sneak peeks of the new series at the Wheel of Time experience (above). We had the opportunity to listen to the press interviews from actors Gabriel Luna (Agents of S.H.I.E.L.D.), and Nicole Tompkins from the video game Resident Evil Village and more.

You can watch the press conferences on our YouTube channel or below: