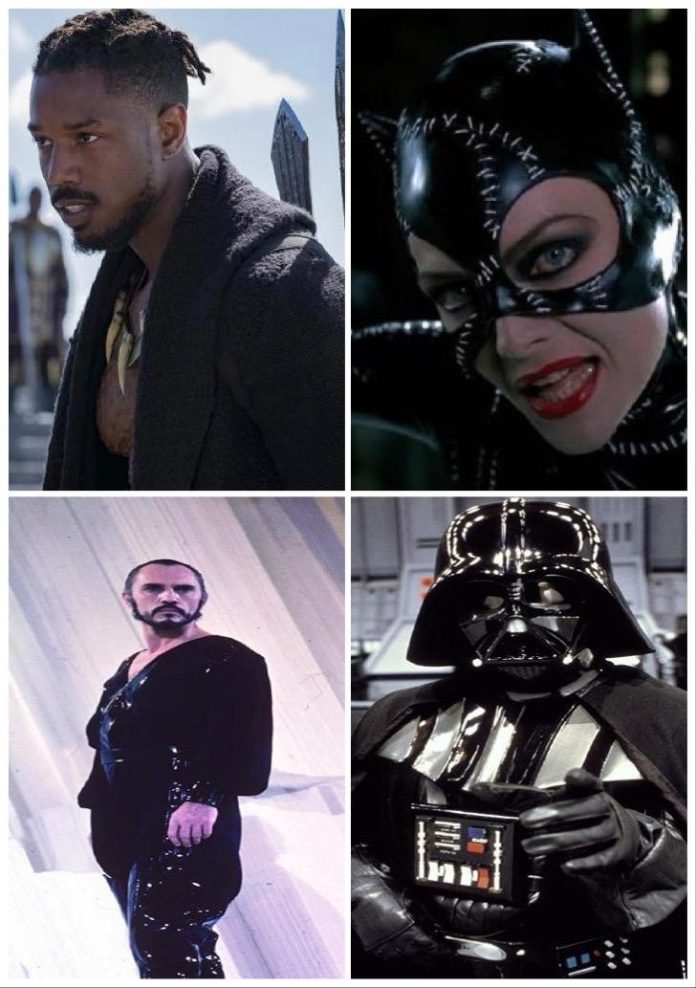 KILLMONGER, CATWOMAN, GENERAL ZOD AND DARTH VADER: Examples of creating and setting the standard for Iconic on screen villains in Sci-Fi and comic book genres in movies. Read on to understand why we’ve chosen these as the most iconic villains.

Great elite actors from different eras. You would wonder what else do they all have in common apart from being peers? That’s simple. They have all brought to life four of the greatest, most engaging sci-fi/comic book inspired villains of all time, and set the standard of how the characters would be played going forward by other actors on the big screen. This in my opinion has not yet been surpassed, as they each give villains charisma, presence, complexities and depth that would never have been there without these gifted performers. They also give points of view you could understand. It’s fair to say that if you put these four combustible elements together in the same room, they wouldn’t play well together. I truly believe the old adage ‘you either die a hero or live long enough to see yourself become a villain’ applies to this foursome, as none of them truly believe themselves to be the villain of their own story. Killmonger, Catwoman, Zod and Darth Vader all display narcissist behaviors and show a highly inflated sense of their own importance and values. Their characters are brought to life brilliantly by the actors playing them, which resonated with me how they were all able to tap into the characters’ ability to relate to the audience. These specific four performances tapped into people’s imaginations, and will continue to for new and old fans alike.

Michael B. Jordan brought a powerful performance of aggression, unapologetic intensity, intelligence and exhibition of rage and pain of a young man separated from his nation and family. His performance elevated the Marvel comic character of Erik Killmonger to iconic pop culture status and notoriety worldwide for people whom were not aware of the character. His story as Erik, a genius level MIT graduate and high ranking elite navy seal returning to his fictional African country of Wakanda to take the throne from T’Challa, eloquently played by Chadwick Boseman. His desire was to use the advanced technology of the nation to help and empower the black oppressed community from the African diaspora from the world by any means necessary. He carried the rage off the recent horrible history of black systematic oppression such as slavery, apartheid, civil rights, injustice in America and worldwide from the last few hundred years. Meanwhile, Wakanda and T’Challa seemed to represent Africa before colonism and slavery and showcased its regal, powerful and rich history. He wanted to use the army and advanced weaponry of Wakanda and steal the powers of the Black Panther for his mission. For Killmonger, he believed he was fighting for justice, liberating his people, vengeance and is prepared for the bloodshed through violence of anybody that stands in his way, allowing him to take advantage of the tribal division in Wakanda to seize control due to these tactics. The clash between Killmonger’s philosophies of strategic brute force and rage versus T’Challa’s compassion, justice and patience was compelling and sometimes heartbreaking. Michael B. Jordan’s performance made Erik Killmonger the best villain because of the complex layers of his character’s reasoning. He carried a confidence and swagger which came off the screen, and because his mission was partly addressing dark parts of human history which is still unfortunately reflected in modern society as the last few years has shown. Killmonger’s ultimate undoing was the hatred and anger that consumed his heart.

Erik Killmonger – “I want the throne. You are all sitting up here comfortable. Must feel good. There’s about two billion people around the world who look like us and their lives are a lot harder. Wakanda has the tools to liberate them all.”

Michelle Pfeiffer brought a powerful complexity and duality to the role of Catwoman, as in essence she plays three characters: pre -Catwoman /Selina Kyle, Catwoman and post-Catwoman/Selina Kyle. She brought a feline like quality through movements, green cat-like eyes, and beauty that empowered her sexuality and confidence as a woman but also showed how dangerous and formidable she was physically with power, agility, athleticism and grace. She gave a scene stealing performance opposite Michael Keaton, Christopher Walken and Danny DeVitto. What made this iteration of Catwoman/Selina Kyle powerful was that it touched without actually mentioning mental health and the implications of it, after a violent traumatic event results in her experiencing her own version of PTSD (Post Traumatic Stress Disorder), and how it pushes her down a path into her alter ego. The film showcases how she seizes her power and embraces it unashamedly and proactively, even if it pushes her to the wrong side of the law. Many talented actresses have taken the mantle since Michelle Pfeiffer but none so far have managed to leave an imprint like hers, which has achieved cult status and has elevated Selina Kyle/Catwoman – especially the PVC catsuit which makes her sexuality feel empowered and liberated. Michelle trained in gymnastics, kickboxing and yoga to prepare for the role and learned to use the whip as mentioned in various media. It has been 30 years since Batman Returns was released, and Michelle Pfeiffer’s performance of Catwoman and Selina Kyle for me is still the standard portrayal of the character. It would be great for her to return to the character now that the DC Multiverse has been made canon on screen.

Catwoman – ” Who Are You? Who’s The Man Behind The Bat? Maybe You Can Help Me Find, The Woman Behind The Cat.”

James Earl Jones is a legendary powerhouse of an actor on stage and screen brought a powerful complexity and duality to the role of Darth Vader, arguably the most iconic villain in the history of film and television. While British actor David Prowse embodied the physical and visceral form of Darth Vader, it was James Earl Jones’s bassy, soothing voice that gave him life and a sinister, regal, dominating and malevolent like presence that separated Vader from other villains. And thus, he became one of the most iconic well-known voices in film and television.

James Earl Jones mentioned in an interview with AFI regarding Star Wars-Empire Strikes Back (1980). He recalled George Lucas telling him :

“You’ve gotta keep his voice on a very narrow band of inflexion cus he ain’t human, really”.

Mixed with his own theme music, ‘The Imperial March,’ a score written by legendary film composer John Williams, went on to become one of the most recognizable and critically acclaimed film scores in history. It helped cement the character of the evil sith lord Darth Vader in popular culture going forward, forever enduring still today, and proving to be a great combination. It would be a 40 year plus journey with Darth Vader that still has an impact in cinema and entertainment today.

Darth Vader – “You don’t know the power of the dark side! …”

Regal authority, dictatorship, loyalty to his people and military brutality seem an ideal description for one of DC Comics and Superman’s most famous villains from the Kryptonian General Zod. Portrayed by the talented British actor Terence Stamp with such command, presence, style and charisma with such subtlety and narcissism of the highest order. Stamp was the first live action interpretation of General Zod, which has been the template and standard of the characters portrayal. The slick hair, shaped up beard all added to his swagger of General Zod. It was was balanced out by the fury and elegance of Ursa (Sarah Douglas) and the silent but brooding strength of Non (Jack O’Halloran), Zod’s Kryptonian henchmen who held Superman responsible for being held prisoner in the phantom zone by his father Jor-El for war crimes against Krypton. Terence Stamp uttered one of the most famous lines in cinema history, which to this day has become part of Superman lore. General Zod will stop at nothing to rule Earth to replace the heartbreak of his planet Krypton being destroyed. He also has all of Superman’s powers with evil and bad intentions.

General Zod – “Come to me, son of Jor-El! Kneel before Zod!”