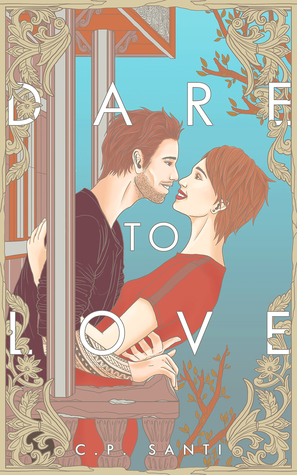 Restoration architect Giada Manahan’s heart has begun to resemble the adobe walls she loves. At least that’s what her friends say. But Gia knows better—she’s just being cautious. After all, as a single mom, her kids are her first priority.

But one drunken night, her friends push her into a trippy crystal healing ritual. Gia thinks it’s a joke . . . until a few days later, she finds a half-naked stranger in her bed.

Hot, tatted anthropologist Alex Roces is exactly the kind of guy Gia should avoid. But when they end up sharing a house, Gia finds Alex’s charms increasingly difficult to resist.

Will Gia continue to keep the walls around her heart? Or will she finally give in to its demands?

Dare to Love follows the story of a single mother of two. She’s an architect who falls in love with an anthropologist “bad boy.”

I’m still pondering about this book. It’s simply one of the most feminist and radical love story I’ve ever read. Regardless if that’s the author’s intent or not, the depth and uniqueness of Dare to Love is not to be missed. You should pick it up, particularly, if you’re looking for a sweet romance.

It’s a story of an architect, who’s also a single mother, that falls in love with an anthropologist bad boy. That sounds so simple, but the twist is within the complexity of the writing. The main protagonist, Giada, shaped the womanhood viewpoint of the story. There’s this unspoken rule, especially in the Filipino community, how mothers should only prioritize their children, how they couldn’t have room for anything else much less themselves. She is successful, she’s devoted to her faith and kids. And the author made her desirable too. Her autonomy doesn’t only revolve around her children and responsibility, which is the common grey portrayal of mothers in fiction. That’s worth noting.

However, what makes Dare to Love even more revolutionary is that she comes from a family of devout Catholics. She has an uncle and a brother who are priests. Philippines is predominately a Catholic country. The church has a significant influence on cultural authority, politics, and society. She got pregnant when she was a teen while her boyfriend and the marriage proposal that’s supposed to come along with it was off of the table. That is frowned upon in Filipino culture. She’s bound to be a pariah. Though, instead of shunning her, her family embraced her with open arms. Of course, she’s still the talk of the town but the point is she has a supportive system. It’s a contrast to the common portrayal of Filipino Catholics who disown their family members who “disgrace” them. I love these nuances.

The romance is heartwarming, the ending and build up won me over.

Dare to Love is a pure romance, but it went beyond than what its counterparts typically offer. Highly recommended to Courtney Milan’s readers. They both have the panache for political agendas as the naysayers would call in. Too bad for you all, women love politics. Our existence is a simple political statement.