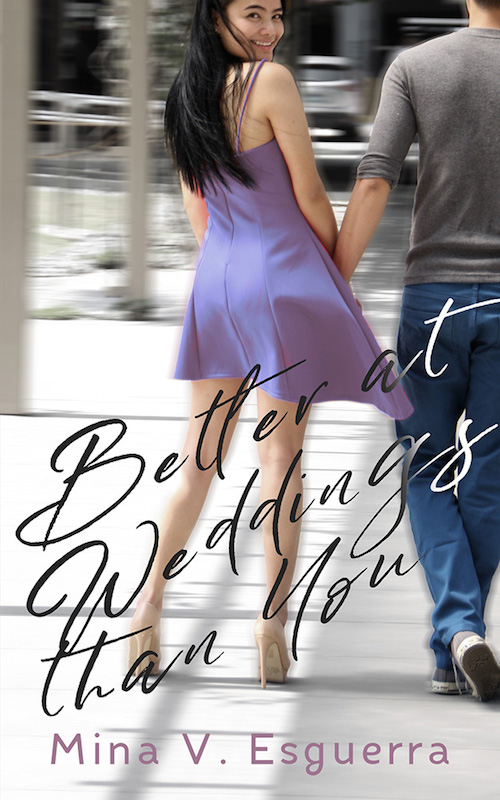 Daphne Cardenas is the best wedding planner around, and everyone knows it. That’s why her friend Greg hired her as an emergency replacement one month before his wedding—because he fears his fiancée Helen is falling for the guy they first hired for the job.

Aaron Trinidad is new to the wedding industry but years of conference planning and loads of charm make him good at it. Really good at it. Planning the wedding of his friend Helen should be easy, and it is. To be unceremoniously fired isn’t good for his new career, but the chance to learn from the best might be the silver lining.

Aaron and Daphne have chemistry, but there’s history with Helen that at least one other person considers a threat. Who’s the planner who can fix this impending disaster?

(Part of the Chic Manila series, but can be read as a standalone.)

I read Better At Weddings Than You after a two-week drought of not finishing anything. This novel is everything I ever needed and I gave it five stars. It was an exhilarating, fun, and steamy book. If that still doesn’t convince you, I suppose we can’t be friends.

I typically don’t enjoy the we-just-met narrative for romance. I prefer a long history of build-up, but Esguerra certainly knows how to flesh out her characters. Better At Weddings Than You follows the story of Daphne. She’s the biggest in-demand wedding planner in the country. She’s perfect, beautiful, and has a reputation for being petrifying. It’s not rocket science why her friend Greg enlisted her help to overthrow their planner, a month before his wedding. He’s worried that his fiancée might be in love with this guy.

It’s Aaron Trinidad, an amateur wedding planner. He’s oblivious that his friend Helen might be in love with him. Being fired from his job might not be the worst thing ever when he’s roped into working with Daphne. He might learn a thing or two from the queen of wedding planning.

I love that both of them are wedding planners. It challenged masculinity and gender roles. There’s a twist, it’s the female character Daphne who’s more reveled and prominent in the industry while the male character Aaron is the amateur.

“Why don’t you want a relationship?” He blurted that out without an intro . “I… I’m curious. You could be married with kids by now if you wanted to, but you’re not.”

“Hmm.” Daphne looked at him, but turned to the water when she answered. “Do you think I’m just saying that? Like I’m reverse psychologizing the universe?”

“If you wanted to, you could have anyone.”

“This is so fascinating,” she said. “This conversation. I keep wanting to have this conversation with someone and it figures I’ll be having it with a man.”

Daphne did that. This scene just struck me, it’s so funny and ironic. I love that she’s talking about the double-standard expectations we set for women in their thirties. Daphne doesn’t give a damn. She’s flippant. She states her mind. She’s tired of giving people the benefit of the doubt. She’s in charge of her autonomy and sexuality. She’s “too much” for the barricade we subject Filipina to. I love a well-crafted character and she’s one of them.

It’s also endearing that despite being crowned as a man eater and being considered as an unlikable female character you never see her bring down another woman to uplift herself. I wish more authors would remember that in terms of writing their female characters. There’s no necessary reason for pitting girls against each other.

What you can expect: wedding extravaganza, food descriptions, hot massages, and more.

Verdict: I would recommend Better At Weddings Than You in a heartbeat. I love the romance, the female characters, the lovely ambiance. It was a win-win situation.