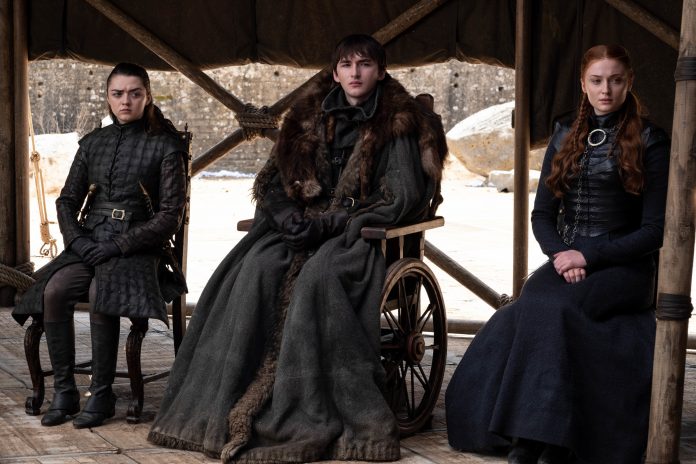 Our watch has now ended. At least, that’s true for those of us who watched the series finale of Game of Thrones. If you have not seen it, turn back now! Spoilers ahead. The final episode of Game of Thrones* begins with Tyrion and Jon walking through the ruined city of King’s Landing. (*We already know there will be spin-offs – HBO loves money and we love nudity, greed, and gore.) Tyrion insists on venturing into the capital alone, where he eventually finds the corpses of his brother and sister, cradling each other beneath the rubble. On the streets of King’s Landing, Jon comes across Greyworm, who is preparing to execute a handful of remaining Lannister soldiers. Jon tries to convince Greyworm to free the men – but the soldier is acting on Queen Daenerys’ orders to kill anyone who was loyal to Cersei. After a tense moment where he considers risking his life to save these men, Jon walks away from the confrontation – with the encouragement of Davos. The soldiers are promptly executed. In another area of the still-smoldering city, Queen Daenerys greets the remaining Unsullied and Dothraki soldiers (so many soldiers – I could have sworn most of them died back in Winterfell?) and gives a rousing speech where she swears to continue to free people from tyranny in every corner of the world. (We must assume this means indiscriminately killing a bunch of people with Drogon.) Tyrion is unable to keep his cool after this speech, and he approaches her in front of the crowd. She accuses him of treason for releasing his brother, and he promptly resigns as Hand of the Queen – making sure she knows he does not approve of her wiping out an entire city. She has him arrested. Meanwhile, Jon and Arya look on at this scene. Arya’s loathing for Daenerys is written all over her face, while Jon looks conflicted. Jon and Daenerys share a glance that is far from affectionate, and Arya takes care to warn her brother that she thinks Daenerys will always see him as a threat. Jon visits the newly-imprisoned Tyrion. Tyrion pleads with his friend to stand up against Daenerys and is regretful that he didn’t listen to Varys when he had a chance. Tyrion has lost all loyalty to the Queen. Jon argues on Daenerys’ behalf, insisting that he remains committed to her and that she had to make difficult decisions. Tyrion tells Jon that he is certain she will not stop now that she has the Iron Throne, and Jon leaves his friend without any clue as to what he will do next.

Jon finds Daenerys admiring the Iron Throne. Her throne. She seems truly happy with her victory and wants him to join her in celebration. He asks her why she had the remaining Lannister soldiers executed when they had already won the war. She tells him that’s just the way things have to be. He asks her to release Tyrion – she says that she cannot. She tells him that only she understands how to make a better world – but that he can join her in ruling The Seven Kingdoms. He promises that she will always be his queen. They share a brief kiss, and he stabs her in the chest.

Drogon immediately knows that his mother is dead. The dragon flies to where Jon kneels over Daenerys’ lifeless body, his dagger still in her chest. In a rush of fury and heartbreak, Drogon unleashes fire on The Iron throne – melting the symbol so many have fought and died for. The giant animal then carefully lifts its mother’s body and flies away.

Approximately three weeks pass. Greyworm leads Tyrion from his cell. He is brought before a council of about sixteen or so characters – all representing the great families of The Seven Kingdoms. Tyrion is there to undergo sentencing for his crimes against the Queen. Sansa asks Greyworm where Jon is, as he was also to be brought before the heads of houses to account for his crimes. Greyworm states that the Unsullied will decide what to do with the man who killed their Queen. After a few moments of arguing that lead nowhere, it is determined that the Seven Kingdoms need a new ruler. Edmure Tully begins a speech to state his case for becoming King, but he is quickly silenced when Sansa tells him to sit down. The ever-precious Samwell Tarly wants to give the people a say with a democratic election to choose their new ruler. His proposal is met with laughter. Eventually, the heads of houses turn to Tyrion for his opinion. Tyrion states that after spending several weeks thinking it over he believes that Bran is the only person for the job. He reasons that the story of “Bran the Broken” will bring the people of Westeros together. (Also – Bran knows a lot of things, so Tyrion thinks that could be helpful.) Bran seems to know this is coming – and doesn’t really want to be King, but also doesn’t protest that he is the best choice. Since Bran can have no heirs, it is agreed that the heads of the families of Westeros will convene again each time it is necessary to choose a new ruler. This way, Tyrion claims, they have finally broken the wheel.

The heads of each house vote – and, with the exception of Sansa, unanimously agree that Bran will be their new ruler. Sansa apologizes to her brother, and concedes that he will make a great King, but reminds him that The North will never again be ruled with the other kingdoms of Westeros. Bran quickly agrees to relinquish control of The North and is named King of the Six Kingdoms.

Now that a new leader has been named – it is time to decide what happens to Tyrion and Jon. Bran immediately names Tyrion his Hand. Tyrion refuses the job, but Bran gives him no choice. He must live out his days righting his previous wrongs. Greyworm is not pleased with this decision, but he is overruled. As for Jon – the Unsullied want him dead, and his family wants him freed. They compromise by sending him back to Castle Black to live out his days in service to the Night’s Watch.

Jon takes some time to say goodbye to his family before he heads back to The Wall. Sansa is also heading North to rule as Queen in Winterfell. Bran will stay in King’s Landing to rule with Tyrion’s help. But Arya is headed out on a Stark ship (though the crew of this ship remains a mystery) to discover what is west of Westeros.

With so many events to wrap up, the entire episode feels a bit rushed – but we do witness one more farewell. Brienne adds her own ending to Jaime’s story in a volume on the Knights of Westeros. Despite her heartbreak, she wants future generations to know that Ser Jaime died protecting his Queen. There is a brief meeting of King Bran’s small council – which consists of Tyrion, Bron (Lord of Highgarden and Master of Coin), Archmaester Sam, Ser Brienne of the King’s Guard (with Podrick at her side), and Davos – Master of Ships. A few positions on the small council are still open – but Bran seems to think everything will come together. He leaves sorting out the details to Tyrion, while he plans to focus his attention on locating Drogon.

In the final moments of the episode, we see Jon, Arya, and Sansa beginning their new journeys. Sansa is crowned Queen in the North, Arya sails away on a ship, and Jon arrives at Castle Black. And though Jon has always believed in honor and duty, he appears to forget his life sentence when he spots Ghost and his old friend Tormund. Together, the men lead the Free Folk north of the wall once more – beyond the rule of any King or Queen of Westeros.

This finale certainly delivered an emotional rollercoaster, and we will no doubt find it difficult to say goodbye to the characters we love. But it seems there is plenty of opportunity for a few of them to reappear as their stories continue. We’ll keep you updated with any news of the Six Kingdoms (and beyond).