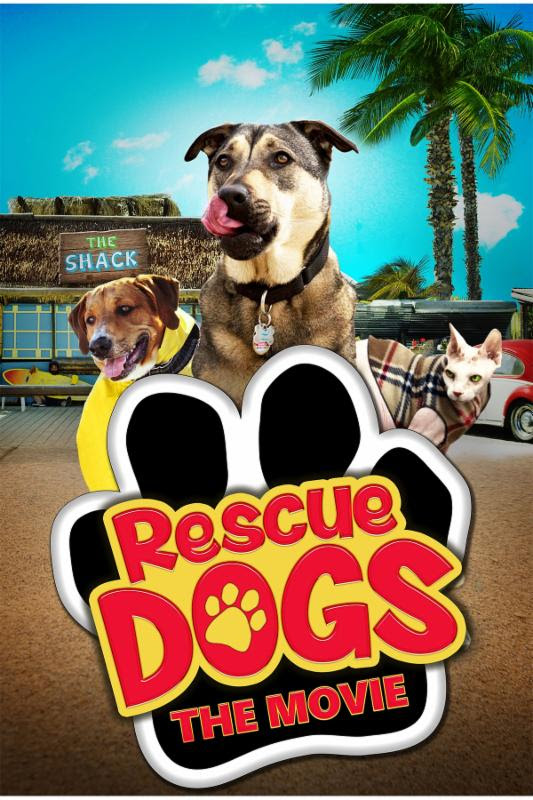 Check out our film review of Rescue Dogs The Movie. Who doesn’t want to believe that animals can talk?! Well in ‘Rescue Dogs’, they do just that! Tracy (Paul Haapaniemi) and his rescued dog Charger (perfectly voiced by Peter Oldring) make the perfect culinary duo at the small beachfront restaurant, converted from his grandfather’s home, named The Shack. Even though Tracy is an expert chef aided by Charger’s keen sense of smell in the kitchen, Tracy is finding it difficult to make ends meet, especially when a banker (Andrew Ryan Harvey) representing the E-Vaul Corporation reminds him of the loan he accepted from the company to create the restaurant. Now the head of the E-Vaul Corporation wants to buy (take if rent is not paid) the property for a future golf resort and will stop at nothing to obtain it. As if his life was not already complicated enough, Tracy finds himself falling in love with Bridgette (Courtney Daniels) as well as dealing with his optimistic albeit kooky brother, Harper (Jordan Rawlins).

As an animal-lover, especially one who does rescue work, I found the movie extremely entertaining and endearing. The film emphasizes the important role that pets can play in our lives. There is Harper’s always encouraging rescue dog, Callie (voiced by Tamara Garfield), Bridgette’s former laboratory hamster turned fitness buff, Hammy (voiced by Fred Tatasciore), and the appropriately “purchased” feline (Nightmare-voiced by Brian Hull) of the head of the E-Vaul Corporation (Casey Campbell). Witty narration by two Sandpipers (voiced by Jessalyn Gilsig and Casey Campbell) as well as a Seagull (voiced by Casey Campbell) on the beach nearby, along with catchy original music by Jon Light culminates in a delightful film emphasizing the idea that heroes often have paws and really tackles the question, “Who rescued who?”

‘Rescue Dog’ opens tomorrow, April 1st, and I encourage you to check it out!

In addition to the theatrical release beginning April 1, the distributors have joined forces with Tugg and are making it possible for charities and animal rescues anywhere in the U.S. to host their own screenings to raise money and awareness about the joys of rescuing shelter animals. A link on RescueDogsMovie.com homepage allows charities to apply to host a screening at a local theater near them.