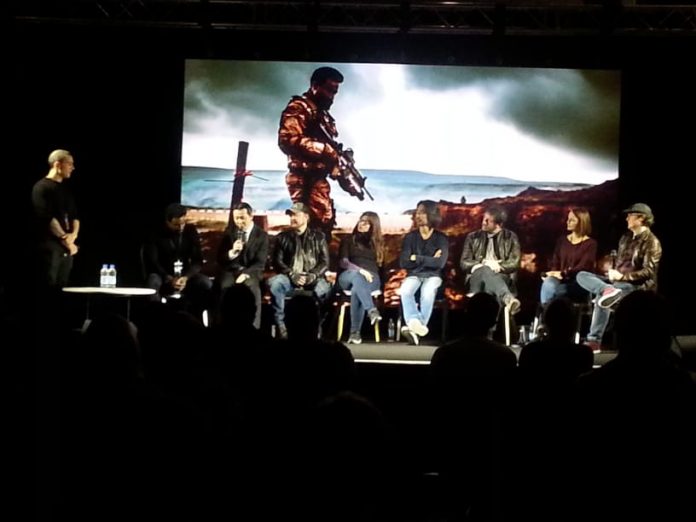 We had the chance to speak with the director and producers of the new UK Independent Horror, Zombie movie, Redcon-1. They had stopped by on their UK wide city tour, promoting the film at MCM London Comic con. I had the pleasure of knowing one of the producers, Ioanna Karavela (Chocolate Wrapper) through a mutual friend who featured in Redcon -1, a young up and coming British actress named: Leonora Stavrianakos. Ioanna was joined by her colleagues, Producer/Actor Carlos Gallardo (Desperado, El Mariachi) and Director Chee Keong Cheung (Bodyguard: A New Beginning). We spoke about influences and the horror films impact on audiences and communities, the interview was conducted by me Domingos Coxi with my colleague Darryl Ley for Hollywood News Source. IK- You’ve seen the film too.

DC- I saw Redcon-1, I saw the film with you at the screening, I appreciate you all coming to the interview for us, how did you all get involved?

CKC- The origins of the film is, as I was a big fan of Danny Boyle’s 28 Days Later. My background was in directing martial arts films and being a fan of films like, The Thin Red Line and Black Hawk Down, added a fusion of a zombie/war film, and then adding that element of martial arts I’d done before. Me and Ioanna had worked on the Bodyguard: A New Beginning and both went to film school together. We met in the states with Carlos.

DC- Has it even surprised you all how Redcon-1 has connected with people? I listened to loads of people talk about it on social media, Comic Con and the Raindance Festival as well. Has it surprised you the impact the film has had Ioanna?

IK- I was about to say Carlos you should say that because you’re this tour.

CG- the only reason I point to them is am I surprised? No and she knows it and people on the set know it, because I was always very keen of what we would be making. She would send me stuff as the process began in post production then we would see it. I always attach myself as the producer I like to see things as the audience, I still go to the movies by myself, buy popcorn, my drink and watch movies. So when I started seeing the film and started seeing the development of the editing, I started getting more and more into it, and still had the goosebumps when the emotional parts come. I’m the one that kept saying that we will find an audience out there.

IK- It’s totally the case; I’m in awe when Chee sends me a fan of the movie, tattooed Redcon-1 at the screening. The films seem to be having an impact in ways I never thought possible, Chee sent me the picture, there’s a real loyal club of cinephiles that love the film and it’s been a surprise for everyone, that there’s a bigger audience than people thought, and for me that is the answer to our efforts. DC- I noticed you took risks with Redcon-1, and you wasn’t afraid to be unapologetic and visceral with the images, was it something you all collaborated, on or something that developed to bring the audiences in?

CG- From my perspective that is the director’s vision.  What I sat down and spoke to the director about was how are we going to shoot this such as the time frame, even Chee would say’ now we are going to shoot a little bit here and there. But it was always very clear for both of us down in LA (Los Angeles) during meetings i.e. restaurants etc… We are going to just shoot. We are very proud that we shot more than Stanley Kubrick in Full Metal Jacket, that’s why the movie looks beautiful, and I believe we got gold.

DC- As you said, you’ve got the martial arts filmmaking background and you bought that dynamic as well?

CKC- I guess kind of going back to the audience, it’s more fascinating you make a film as a director and you get so close too, you see it thousands of times and you study every cut and analyse, the tours been amazing actually getting to connect to people, we’ve been on this 30 day, 30 city tour, where I was kind of really conscious that the team where we had been on tour and part of the reason was to see what people thought of the film.

We wanted it as a big screen experience; I kind of wanted to see how people respond to what’s on screen, and to see what scenes they likes and how they would respond. The response has been phenomenal on that side and it’s really great having that chance to talk to audiences and, and see which bits are the standout moments. Which action sequences they like and characters.

That process has been amazing, I wanted to make or take a kind of almost graphic novel style to the visuals, the young Italian cinematographer Lorenzo was very instrumental to helping achieve that look, I kind of wanted to make something that was relentless, really kind of hard hitting and heavy, and go back to the films of the 80’s and 90’s. We were not necessarily relying on CGI due to budget. The plan was always to support the vision and scale of the production; we had over 1500 background artists in the film.

We had to use large amount of tanks, Helicopters and Humvees, we also filmed in 12 different cities across the UK, Scotland including: Glasgow, Edinburgh, Peterhead, Lancaster, Preston, Rugby, Stafford, and London. A lot of the community came out to help support the film, when I was behind the camera and in front of the camera. A lot of the extras had never acted before so it was their first time, there was a lot volunteers a mixture of accountants, Doctors, Lawyers, forensic detectives, primary school teachers etc…

When you make a film he possibilities in terms of helping to bring that vision to life was pretty exciting, In terms of the visual aspect it was something early on that we wanted to create something quite striking, that would grab audiences. In a film you have a certain amount of time to hold people’s attention, let’s go out and be as brave and bold as possible. DC- Seems like the cast, crew, producers, and writers seem like a community, is the feel I’ve gotten from it?

IK- An Independent film doesn’t happen without a community to really support it. It fascinates me, with today at MCM Comic Con London, we have zombies who have volunteered to come here, they are behind us getting prepped, these are people who are following the film, from the beginning of it, starred in it, participated in it, this isn’t Hollywood glitz! This is nuts and bolts filmmaking with my hands, Carlos’s hands, Chee’s hands I know it sounds dramatic, but it is the situation. There’s no big trailers, no fancy nothing, it’s all hard work.

CG-Make up usually has the trailer.

IK- We had to go find a room and get everyone 3 times to change costumes etc… Without the community, without the support. We can bring something big to the screen from another angle. Another place and talk to the studio about a vision that exists. Chee is a visionary filmmaker and Redcon-1 is more than an action/horror film, if you really pay attention to it, some incredible sequences. Whose here at MCM Comic from today? It’s the community, it’s the people, and these people turned up every day and said how can I help make his film? Go a step further.

IK-When you have children on a bus being driven to a quarry in Rochdale to become dead bodies for a sequence that it really does say a lot!

DC- It’s for the love and passion isn’t it?

CG- When I get questioned about the fact that there was no trailers, no this, or no that, this is what I say? There’s a lot of books out here about how movies were made in the 60’s and 50’s western movies. To mention Giant, you see pictures of how that movie was made, there’s the camera, and the actors are actually sitting with their umbrellas, there is no trailers.

CG- So we take a little bit of history and bring it to the now, you might have some actors saying’ I don’t have any trailers. Let’s go back into history did you at least go into film school? Or acting school? Those old films in the 60’s didn’t have trailers a few times I’ve mentioned this to Chee, it’s just like making a western with John Wayne. Nowadays people are not used to something else, they can’t look into that scenario. Not every actor will survive in this type of filmmaking, I come from this world.

DC- you’re going back to your roots almost?

DC- This is a Foundation of what filmmaking is creativity, community and teamwork. CKC- We didn’t have big budgets, I always think in a way when you make a film it’s like a campaign. You have your message, your vision, and you’re trying to go out and win hearts and minds, this is something we believe in and we hope you come out and support that.

The Audience has been phenomenal; it’s surprised me in a really good way and positive way. People have also found love on the set of Redcon-1, so it’s amazing the zombies bringing in their parents and families to the screenings, and you get to know them. We had Yasmin who plays Alicia the young girl in Redcon-1, came with her parent’s yesterday. It’s something special when everybody comes together to make something happen.

There were a lot of people in industry that said it couldn’t be done, it isn’t going to be possible you need a budget of 10 million. In the end we somehow found a way, it was down to the people that helped. We have an Independent film playing at the multi-plex alongside Venom, and a Star is born. It’s kind of a crazy scenario and some of the showings we have outsold Venom, we wanted to make it like an event we created and had zombie walks in Leeds, Manchester to support the release of the film, which were organised by the zombies from the film. It’s fascinating when you see the amount of commitment involved from people.

DC- You’ve added another chapter to the British horror genre, and the fact it’s done really well with people across the country, so if you had to describe Redcon-1 in 3 words what would you pick?

CG-I’ve been saying mental all day.

IK- There’s something about Redcon-1, you watch it again.

IK- We want to thank everyone.

CG- Then the year after we can have another one.

DC- Redcon-2? I want to thank all of you for this interview it’s been a pleasure, coming to the screening, I enjoy supporting my filmmakers, especially young British talent.